SUMMARY: Contrary to what I expected, this little drive cooler lowered my drive temp by over 3 C. Cheap, fairly quiet and effective – not a bad addition if you have 7400 or 10,000 rpm drives.

As hard drive speeds increase, hard drive temps are increasing as well; there is more friction at 7200 rpm than 5400, and even more at 10,000 rpm. A drive that runs hot will fail sooner than a cool running drive, so drive coolers are not a bad thing to have in your system. 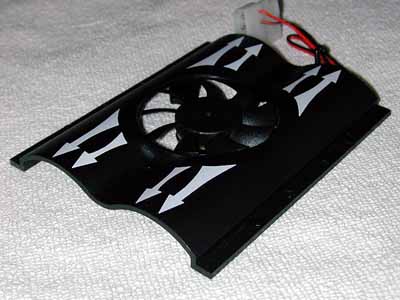 PC NUT was kind enough to send us a sample of one such device – as the pic shows, it looks like the top part of the Batmobile. The fan is 60mm and is advertised as putting at 20 cfm; let’s just say that a number of products are using testing procedures which have changed the laws of physics and leave it at that.

I have an IBM Deskstar 10 Gig 7200 rpm drive that does run warm – This is a good test bed to see if the Batmobile makes a difference. I poked around the drive with my digital temperature probe (Radio Shack – $10) and found a spot on the drive that was fairly warm. I specifically wanted an area that would be out of the cooler’s air flow when I installed it.

You can put the cooler in on the bottom of the drive – it comes with four screws to mount it this way. Figuring heat rises, I opted to just place the cooler on top of the drive and leave it at that. I ran the drive for a while, shut down, installed the Batmobile, and measured temps again.

I did notice that my system temp increased, not totally unexpected as the drive’s heat has to go someplace. However, the drive is running cooler and that ain’t bad. The downside is that if you have multiple drives closely packed, a drive cooler like this will not work as it does need some clearance.

Thanks again to PC NUT for sending this our way.

While compiling all the responses is going to take a while (it’s awfully hot, and my machine has been spontaneously rebooting more than a bit since the hot weather showed up), I’ve compiled enough to give you a general idea

How DOES A Fan Work?


This Looks To Be The One