OK – So one fine day you find yourself rummaging in your toy-box for one thing or another – pushing aside old hard drives, outdated CPU’s distant predecessors to your current video card (you know how it is) – and it dawns on you that a good way to get all this ‘Junk’ out of the way is to build a second computer.

But… where would you put it? The box is cool; cases don’t take up all that much space. But what about a second monitor, keyboard and mouse – a whole second work station!

Just when you’ve gotten your work area the way you want it. A second Monitor! Big bucks! And you think “This money can be better spent elsewhere!!”

After going through this a dozen or so times, it occurred to me that there had to be a way to use two computers on ONE monitor, ONE keyboard and ONE mouse. And of course there is,

The one I settled for was a “Belkin Omni Cube 4-port”. The Belkin is a relatively simple I/O Box. Basically you input your monitor into the box which has four outputs which attach to up to four computers. Then you do the same for your keyboard and mouse – 15 minutes work. You can then switch between your machines by pushing a simple button on the box which comes with LED’s to indicate which box your currently connected two.

Not all mice will work with the Belkin, nor all keyboards. Belkin recommends, you use keyboards and mice – you guessed it – by Microsoft. But my Logitech’s worked fine with the “Cube”.

You simply shut your machines down, make your connections, turn on the “Cube” first, then boot your first machine. Your supposed to be able to boot all (up to four) your machines at once, but I found that if you do, Windows will install default mouseware drivers, but if you boot one machine at a time you, can avoid this.

I have to say that this setup works great. The Belkin also lets you switch between machines by double tapping your keyboard’s ‘Scroll Lock’, then hitting a number key between 1 and 4 depending on the box you want your monitor, keyboard and mouse to access.

Drawbacks? There is but one that I know of…. Price! Belkin wants $200.00 for this hydra. Seems like a lot to me, even given that a “Cheep” monitor will set you back $300 and will require another or enlarged desk space.

But all things considered, you do get a second box running completely independently rather economically. Great for playing a game on one machine while watching the Forum and E-mail for “INCOMING!” of a different sort.

Once I got used to this setup, one annoyance repeatedly cropped up:
What I had was two completely separate machines; if I downloaded or created a file on one machine, I had to move it to a Zip Disk, then manually install it on the second machine.

If I need a file on box “one” while connected to the Internet with box “two”, I had to disconnect box one a reconnect with box two. Mail received on box one was not available on box two. In short, two machines on a single monitor doth not a Home-Network make!

I have no doubt that there are other solutions – perhaps better solutions – (Please let me know if you have one!) but I went to my friend Jon at Minotaur and asked his advice. I told him I had two, possibly three, machines I wanted to interconnect that I wanted to share Internet access – without shelling out more money to my ISP – access files on any of my computers from any one of my other computers.

Jon suggested “Netgear’ as a good choice. A Netgear hub (interconnecting box, about 4″ X 4” in size.) and a Netgear network card for each machine I wished to use ( up to four, but there’s no real limit here as daisy-chains are possible.)

I went with the “EN 104” Netgear setup – cabling came with it. I originally installed on a Win 98 SE, but Win ME upgraded without a problem.

The install was a piece of cake: Simply turn off your machines and install your network cards into free PCI slots on each machine you want to connect. Run a supplied cable to the “HUB” box.

Then turn on your first machine. Netgear will setup as a “peer network”, where any machine can access any other machine on your home network, OR as a server-client network, where one machine provides services (Server) to a group of clients or workstations. This choice is simply determined by using or not using the # four plug on the hub.

When you boot your machine, Windows ‘sees’ your network card and installs it asking for the provided floppy in order to setup your cards drivers. You do this for each machine you’re interconnecting.

I had quite a bit of difficulty setting up at first, this due to the complete lack of instructions on setting up windows in the “Network Neighborhood”. Later I found a simple solution: Just open “Network” in “Control Panel” and remove everything in the first box that appears which is “Configuration box, then reboot. With the drivers installed, Windows then installs everything needed to make a go of things.

You may not find this step necessary as I suspect that Windows simply blew it the first time around. Now you have a few simple choices to make. Back into Control Panel and “Network”, there’s a button titled “File and print sharing”. This lets you determine which files on the machine you’re currently using you wish to make available to other machines on your home network.

This can be done on a file by file bases or you can enable entire drives at a time. This is called giving “permissions”. I’m setup so that I can access any drive on any machine from any other. This can save you bucks! Because you don’t need a CD-ROM drive on more than one machine, same thing for ZIP drives.

If, for instance, I want to download a ZIP Drive file to my wife’s machine (which doesn’t have a ZIP drive), I open the “Network Neighborhood” Icon on my wife’s (Patti) machine’s Desktop. This is what mine looks like: 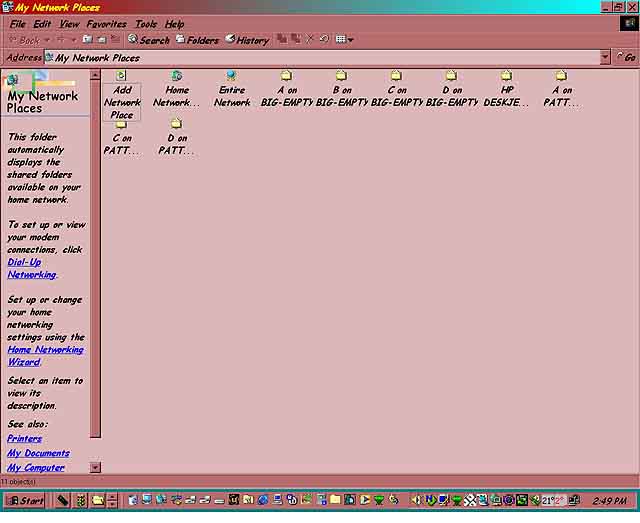 (I actually have three machines, but only two appear as I’m of course viewing the other two from the third.)

So far I only know how to “go and get” files I need from other machines, but you may be able to “send” files as well.

Tired of feeling like a swine for hogging the Internet connection, but just can’t seem to get off so other family members can get on? Both Win 98 and ME will set one of your machines up to be “the connection” for every machine on your home network.

Windows uses a Wizard to setup “Internet sharing” on your first machine. Then Windows asks for a disk and downloads to it everything your other machines need to know to use the first machine as a “proxy”.

You just insert the disk in each machine on your net and install – it’s that easy”:O}

This will be completely transparent to your ISP.”:O}
There is one or two small drawbacks to this arrangement: If you reboot your connecting machine, all your machines must wait to reconnect – and things can get pretty slow if you’re still using a modem.

Many thanks to Jon at Minotaur for the step-by-step help and great advice as to just which way to go to get what I needed without spending too much.

Hello everybody! I’m writting this article to those international beginners who came here every week, see the amazing overclocking stuff, but can´t buy them because they are in a distant country – many times in the “Third World”. I´m in

Final Review 12/13/99: Not much to say but 2000 looks even better than the beta did. And for those of you have no idea about what I am talking about, read the press release it tells a lot about themselves