To start off about my project, I’m using a Chieftec case. It’s a full
tower case, deep blue.
This web site has a lot of information; my case is the Dragon Series: DA-01WD.

Enough about the case and onto the mods.

First of all, let me just say
that I’m a big LAN gamer and I love going to LAN parties. I was in for the shock of a lifetime when I ordered this case and grunted for the first time, Um, I mean lifted it. But before I get into all of that, I guess I’m going to go in order for the mods which are based on my design concept. 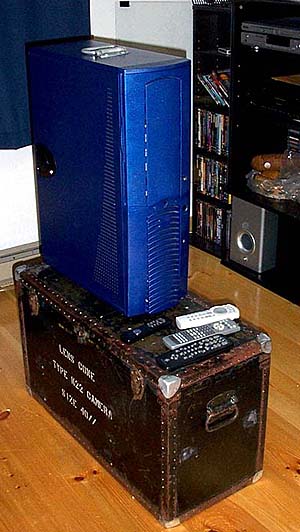 In this picture we can see my case in its entirety. To the naked eye, you can only see three mods on the case. From the TOP I have installed a VERY heavy duty handle. The handle is rated for about 8x what the case weighs, so no problems there. I must say one of the most trying times in my life was trying to get that handle, which requires four bolts centered.

It ended up giving at least a decent hand full of headaches. I’m fairly good at math, even for what I do jobwise, but accounting for (A B X + – /) weight of items which are NOT installed into a CASE and trying to balance the fulcrum point of the handle is NO easy task.

To do this, I found the best solution was to use a 12″ flat head screw driver, which is VERY STRONG. I placed it under the top of the case after having removed the two side panels – this was my trial and error balance point.

Then using baker’s weights (used for measuring powder products like flower,
yeast, sugar and so on), the case was arranged with weights approximately equal to the real components in the proper areas. This made balancing and placement a fine tuned CHORE.

The next problem I ran into was drilling the holes in the top of
the case, which is made of thin, weak metal. My biggest fear is making various parts of the case bent or bowed. To make the holes, word from the wise: Always start a pilot hold with a punch. Then make your first TINY hole with a 1/16 or so drill bit – smaller is better.

Then I went on and used a MUCH larger drill bit for the holes. If
you don’t do this, large bits have a tendency to travel until a hole is
started (NOT GOOD). For the weak part of the case at the top, I added support braces underneath the top. It works beautifully – as shown here: 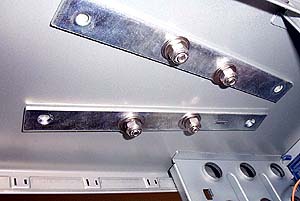 To go on about my mods to this case, I quickly found that the top handle was, for the most part, useless except for traveling no more than 15 feet. The weight of the case, with all hardware, is just far too great. Therefore on the back side of the case you can note the two little half hook loops (very top and very bottom). These go to a shoulder carrying strap, which I made for the case.

Travel distance has greatly improved BUT back pain has increased as well. HUM – ODD?? I’ll have to identify that anomaly.

Moving on the back of the case, there are two other MAJOR mods to the case
which are both HIGHLY visible:

The first one is a compact radiator, which I’ll have to get the info on, but it’s worth its weight in gold for the rate at which it produces heat exchange from a liquid via forced cool air. Now granted the radiator is not hooked up yet; it will make its debut sooner or later. From an inside shot of the case, we can see the location of the radiator at the top back: 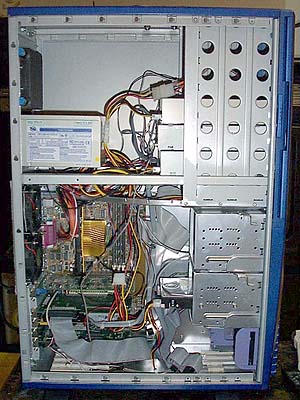 Here we have a close up view of just how small this radiator really is: 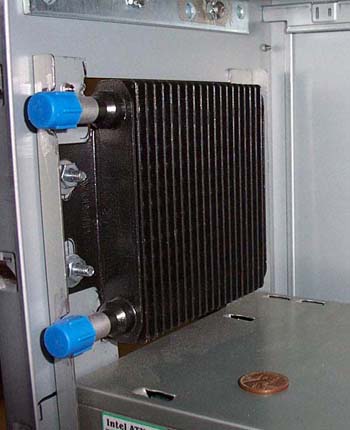 Its dimensions are
4″x5″ (to quote a bit from the Simpsons, “Don’t be con-fused by its common
appearence, cause this little jewel is a true diamond in the rough – now you
going to buy that or not?”) The penny in the picture should give a
relatively accurate idea of its size. There will be much more to come to this part when I start to implement my water cooling design, which I may add is unchallenged by ANY other water block on this web site.

I know this is a bold statement, but I do work at this facility –
www.jax.org. This is a WORLD renowned research facility and on that note, I
really don’t dare to say much more due to security reasons!! Though the lab is not affiliated with my project in any way, I do have friends who dabble in my projects. But that is what I base my claim on.

Next part is my pride and JOY: I installed in this case 2 major filtered areas. From this picture, you can see the back of the case:

In this pic you can see my brass filter holder. The design of this filter holder is simple – how it looks is how it works. There are 2 90mm fans on the back of the case oriented to blow air INTO the case. Same with the front the fans; they are aimed to blow air into the case, giving positive pressure.

The filter is a two part filter, by using two filters. The part you can see is the BIG puffy filter which you can get locally at Walmart or Home Depot – vent filters electrostatic register filtration 12 pack. They are produced by Webproducts.com; a link to the exact stuff I use is here. The second filter I’ll add the information later, but it is a much tighter weave filter sheet.

Yes, this will constrict air flow, but the outside filter is used like a
BIG sponge gathering the BIG stuff, and the second filter (which is under the first one) is for micro dust and particles which get through the first filter.

Needless to say, without this the hepa filter would clog in a few days. With
over 2000 hours on my computer, I only have a thin film of dust on the inside of the case, which is easily wiped away. From this picture you can see how clean the fins on the fans are, that and a little of the filter through the holes: 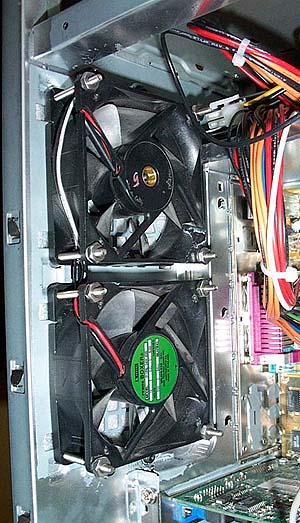 The front of the case is filtered as well, but it’s flawed and will be fixed
shortly. 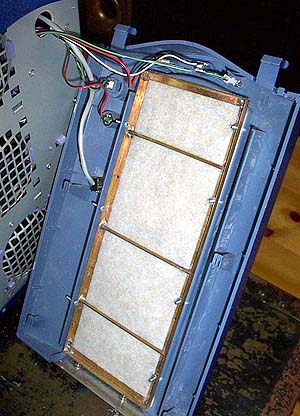 This is the back of the bottom front panel of the
case. As you can see, I built another brass clamp to hold the filter in
place. It works beautifully, but I failed to recognize the fine seam around
the plastic base when installed into place on the case. This allows FINE dust into the front of the case, but all the big stuff gets sucked through the front and is deposited on the filter.

Needless to say, half of my cat is normally sitting on that filter! It’s hard to see from the picture, but the dark patches on the filter are terrible DUST deposits, but I’m not going to take off the filter until at least December. No need to as the volume of air which passes through is unaffected by a badly covered filter (sheer volume of the filter space which is 2″x4″x12″ or 96 cubic inches.

As for audio jacks, I use a special jack from Radio Shack which is spring loaded and not likely to fail any ANY time soon, unlike your standard Walkman player which gets funny after the first time you plug a set of head phones into the thing (catalog # 274-246). There’s nothing like having a head phone jack on the front of the case. This jack is soldered straight to my SBlive value card – trust me, I didn’t want to but it was the only EASY WAY.

Last but not least are my fan control switches: 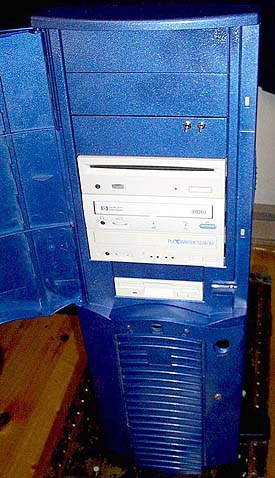 They are mounted on one of the 5.25″ bay covers. This information has been covered a zillion times in the past but I’ll cover it one more time.

To set up a simple PSU control on the speed of the fans, plug the positive or red wire from the fan into a +12v source on the computer’s PSU and the black ground from the fan into the +5v line – this gives you a 7v line. Odd yes, does it works – YES! This case has 6 case fans, 3 in front 2 in back and one in the PSU currently.

All of these fans running at FULL TILT (EXCLUDING the PSU fan) are VERY LOUD!! So when I need quiet time or I’m not doing MAJOR processor intensive work, I throw the switches down to 7v (Be careful of this mod because the wrong wiring can toast your PSU, or FAN, or entire system if a massive brown out occurs.)

The wiring is as follows:

With this setup, it gives me the ability to control my front 3 fans with one switch and the back 2 fans with another switch – two switches total. Here is a picture of what the case looks like currently until I finish up or create some other parts to a Uc board which will go in this same place and control a number of functions. I will get into them as I build them later on: 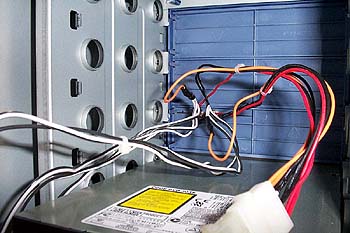 In this picture, you can see the 2 sets of 2 wire strands, with white/black for the back 2 fans and the 3 sets of two strand wire for the front 3 fans. If you try this DO NOT MESS UP! OR GET SOMEONE WHO KNOWS WHAT THEY’RE DOING TO HELP YOU.
{mospagebreak}

To end this current posting of where I am on this massive project, I shall
leave you with my current system configuration:

The good guys at Kingwin were nice enough to send a sample of their Kingwin EZ-Dock (#EZD-2535) to try out. This is a handy way to quickly change among SATA hard drives, especially for back-ups.

You can see initial Penryn models, availability and pricing here. Outside of the $999 special, Penryn is going to be a January beast. The lowest price for a “full” (meaning 12MB cache) quad will be a 2.66GHz chip for $316. Read More