Save your original BIOS using GPU-Z, and make copy for editing. The default file type is a .bin file. 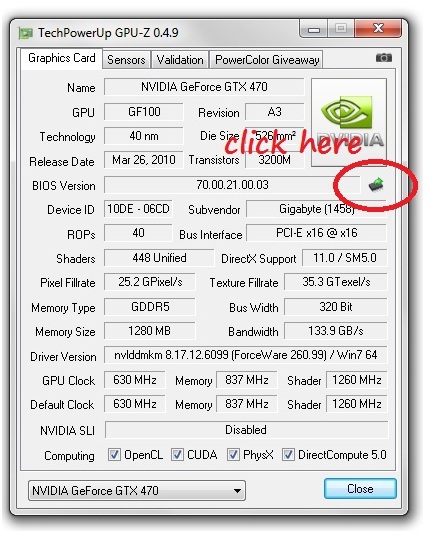 Download, unpack, and run NiBiTor v5.9. Open the copy of the previously saved BIOS by going to File > Open BIOS… (remember that your BIOS is a .bin file). 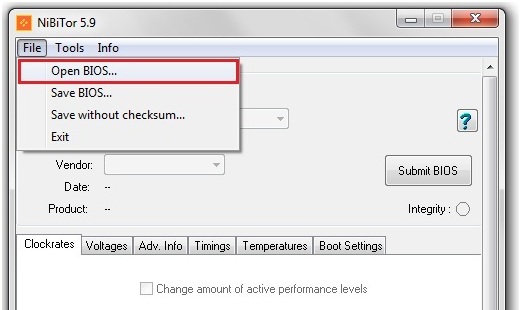 Next, go to Tools > Fermi Voltage. 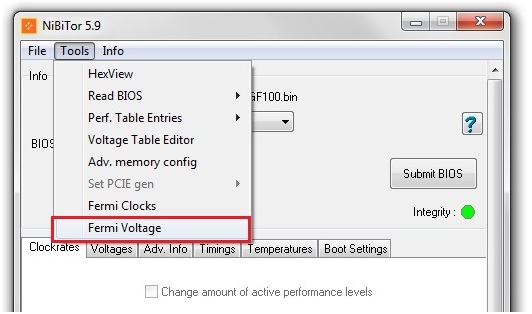 Here we have a window with voltages on each performance level, but most important is the first line, Limit. Default value for Limit is 1.0875 V, and the maximum selectable is 1.2125 V. All that needs to be done is to change default value to 1.2125 V. 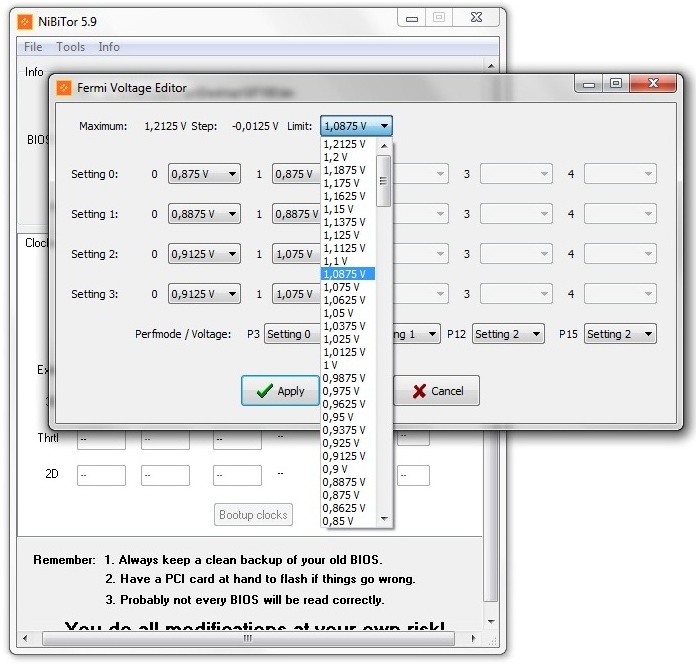 This doesn’t mean that your card will run at this voltage all of the time, this is only changing the maximum that can be selected using software. At this point, your card will still use a maximum of 1.0875 V in full load 3D mode unless you change performance levels or Windows software like MSI Afterburner or nVidia Inspector to adjust voltage.

After making changes, save your BIOS as a .rom file (yes, the file type needs changing from .bin to .rom).

You can change other things too, like lowering 2D voltages, but that’s not the topic of this tutorial. Personalizing your settings is always nice, and it can be fun when you know how to do it right. Before making profile changes, it’s best to try them in Windows where, in the worst case, the system will hang up or show the blue screen if the setting are unstable.

Moving forward, now it’s time to flash your card with the modified BIOS. First, never update a BIOS on an overclocked system unless you are 100% sure that it’s stable. It’s a good idea to load defaults before flashing, just in case.

I flashed while in Windows, but you can always make a bootable disk that includes the modified BIOS and nvflash files. 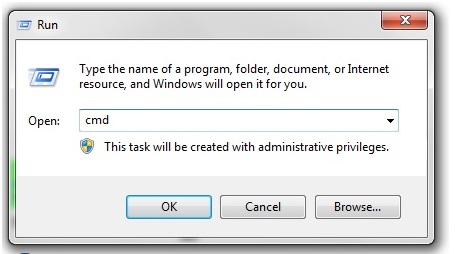 …change the directory to the folder with the modified BIOS and nvflash files, then type the command: nvflash bios.rom -5 -6 (where “bios” is your modified bios name). 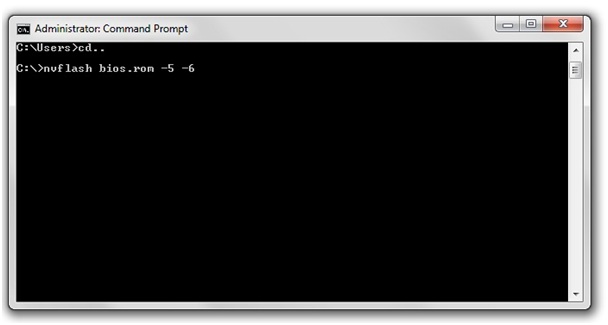 Create a bootable disk (USB drive, CD, Floppy, etc.), then put the nvflash files, your modified BIOS file, and also a copy of your original BIOS on the bootable disk. Both BIOS files need to be .rom files, the original BIOS can just be opened and re-saved in NiBiTor to change its file type. Insert your disk and restart the PC, enter the BIOS, and change the boot order to boot from the disk with the GPU BIOS and flashing files. Save and exit.

There are many programs to make bootable pendrives or other disks. HP USB Stick Formatting Tool can be used, which it may not be the best, but it works.

System should boot as normal and depending on the changes made, it’s possible that system will detect a new graphics card.

Now it’s time to check if the BIOS changes are working. It’s best to use MSI Afterburner or nVidia Inspector.

Afterburner is much more popular, and I don’t think anyone will have problems finding the voltage settings. If the voltage slider is locked, then just click on the Settings button and check “Unlock voltage control” (other settings are optional). 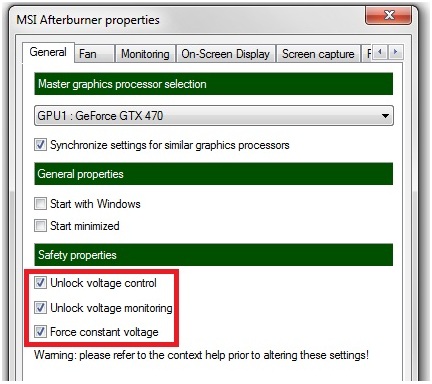 Personally, I like nVidia Inspector. It’s really easy to use and includes more information on one small screen, but it doesn’t have monitoring. Below, you can see the unlocked slider up to 1.212 V. 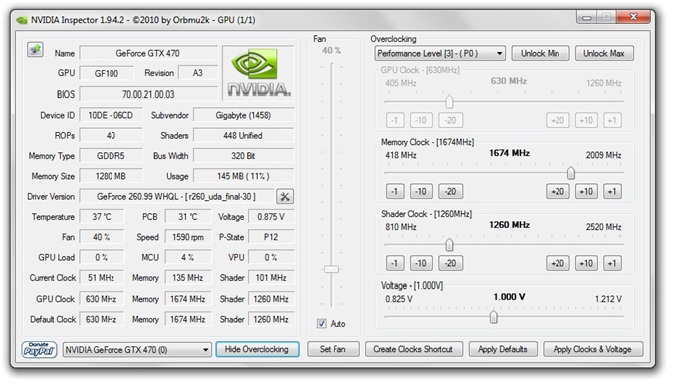 Even though you can set a higher GPU voltage now, there is limit to about 1.125 V. Most cards have protection (OCP/OVP) that doesn’t allow sustaining higher voltage for long periods of time. Sometimes that can be removed for even further overclocking. The modification is simple and all you have to do is short a resistor like on photo below. 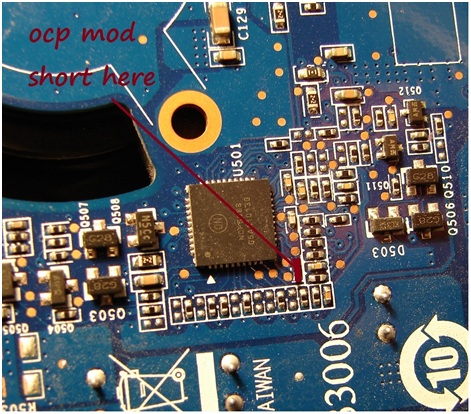 More hardware modifications are well described on vr-zone.com, but most are only viable when using extreme cooling like dry ice, phase change, or LN2.

Time for some results. How high could I push my card after these simple mods ?

My water cooled Gigabyte GV-N470OC-13I  was able to run quite stable at about 900 MHz core and passed the most popular benchmarks at about 920 MHz.

Of course, not all cards overclock the same, and there is no guarantee that your card will run at 900 MHz or more.

An Additional Use for BIOS Flashing

There are many reference GTX465 cards that can be unlocked to a full GTX470. All that is needed is reference GTX470 BIOS, that can be also modified using above tutorial. The only difference while flashing is use the command nvflash bios.rom -4 -5 -6 which is a forced flash that allows mismatched IDs between the BIOS and GPU being flashed. It’s not guaranteed that all GTX465 cards can be unlocked, but many of them can. For example, my friend is now the happy owner of TwinTech GTX465 that is working as a GTX470 with over 800 MHz core.

It’s also worth noting that on AMD’s side a reference HD6950 can be unlocked to a HD6970 with a BIOS flash as well.

This tutorial illustrates how simple it really is to edit and flash a graphics card BIOS. If you don’t want to try hard mods or you just don’t have good soldering skills, then it’s really worth it to spend half an hour or so to make your own unlocked BIOS. I also recommend using a good aftermarket air cooler or even water cooling while raising voltages because the core temperature under load will be much higher than when using the stock cooling solution.

Biostar unveiled its latest mid-grade products for CES 2022. The B660GTA, the B660GTQ, and the B660GTN are all members of Biostar’s Racing line of motherboards. The trio covers ATX, m-ATX, and m-ITX form factors and provides plenty of features without costing an arm and a leg. Continuing that theme, the RX 6500 XT is a dual-slot, dual-fan 1080p capable GPU featuring 4 GB of VRAM. The RX 6500 XT isn’t going to set any records, but it should most definitely fit in your budget with pricing expected in the $250 range (availability and market notwithstanding).

Wow that seems really easy. Its nice when people take the time to make tools availble to the public like that.

This is an excellent article! I used this same procedure from woo before it was in article form and it worked like a champ!

Worked great for me on my Gigabyte GTX460 1gb. Just had to reboot for MSI Afterburner to recognize the voltage change.

Good to hear that :thup:
I was able to hit 960MHz on cold water while Forum Wars :)

Good to hear that :thup:
I was able to hit 960MHz on cold water while Forum Wars :)

You guys are unbelievable! Great job!:beer:

Hello!:) Having PNY gtx460 1gb, I decided to give it a try. While in bios edit, I disabled boot up text saying video card name and enabled max voltage to 1.21v Rebooted and viola! No bootup text, so I'm sure bios reflash worked, but I'm still unable to set max voltage to 1.21 in nspector or afterburner. Strange..:shrug:

I guess it can be matter of software. Maybe try old version of nvidia inspector ? I remember that not every soft was working above default/stock voltages.

Thank you sir, I will give it a go when I can get to it.
Edit: actually I just realized, nspector software is quite old as it as because I have it at least 2 years for sure!:D had it on my hard drive. Only afterburner is latest..:shrug:

Well that's probably not a big deal because it's a reference type card. Not much cooling capacity in this pny card