One not so good, one very good. — Joe

The good guys at BITSPOWER were nice enough to send a sample to two new heatsinks, the NP60CS and NP60CD. These are all copper, skived heatsinks. The difference between the two is that the NP60CS is the smaller brother to the larger NP60CD. In addition to being physically smaller, the NP60CD also features the YS Tech 40 cfm fan, while the NP60CS uses a 29 cfm unit. 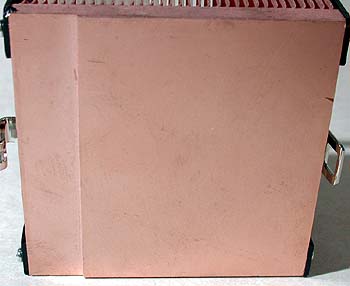 smooth to the touch – not polished, but flat. The base on the NP60CS is 5mm thick and the NP60CD 6mm thick. 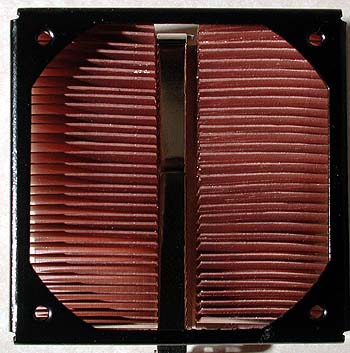 They are about as thick as an index card. The smaller version’s fins are about 21mm high and the larger about 26mm.

The clip requires a screwdriver to mount on the socket. It is not indexed, so some care should be used to ensure that it does not override the socket cam.

The smaller version uses a 29 cfm unit by Superred, model # CHD6012EBS-0A, drawing 3.4 watts. The YS Tech is rated at 40 cfm, 6800 rpm, drawing 5 watts. The YS Tech comes with a four pin adapter and the tach output plugs into a fan header for rpm readouts.

Fan noise is tolerable with the smaller NP60CS – I measured fan noise at 63 dBA 8″ from the fan’s intake². The YS Tech 40 cfm is among the noisiest around – I measured it at 70 dBA – annoyingly loud.

Each heatsink was first tested on the CPU Die Simulator which gives results that are unaffected by motherboard influences. Tests then were conducted on two other motherboards as examples of what users might see on their systems.

Next, I tested the NP60CS on an Shuttle AK31 that is modified to take direct readings from the XP’s die.

These results place the NP60CS in the lower ranks of heatsinks we have tested (Heatsink Rankings HERE).

Next, I tested the NP60CD on an Iwill XP333 and Shuttle AK31 that are modified to take direct readings from the die on a Palomino and XP. I also epoxied a thermocouple on the back of the Palomino for back readings. For a third quick check, I used a KK266+ with a T-Bird to confirm that temps were in the same ballpark.

Performance across three platforms and the Die Simulator confirm that this is a very good heatsink. These results place the NP60CD in the upper rank of heatsinks we have tested (Heatsink Rankings HERE).

However, performance comes at a price – NOISE. The YS Tech 40 cfm is at least as loud as the noxious Delta 38 and maybe a hair more.

²Manufacturers measure fan noise usually three feet away – these are not comparable measures.

Okay folks, I have seen and read all the articles on keeping an overclocked processor cool. I have an AMD Athlon 500 that I am now running over 700 MHZ. What’s the big fuss over keeping it cool with oversized