Another promising design but a flawed implementation. — Joe

SUMMARY: Interesting design concept that could be executed better. 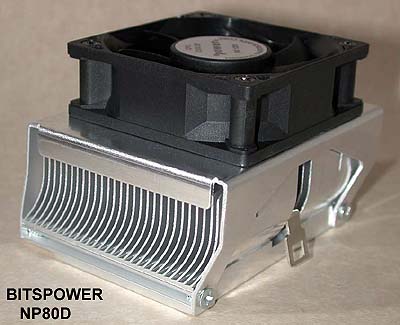 BITSPOWER was nice enough to send a sample of their all aluminum BITSPOWER NP80D to test. This is one of the “Wavefins Series”; as you look at the heatsink, it sort of looks like someone sat on it and squished it sideways. What this design attempts is to curve the fins to the fan’s airflow pattern.

Air comes off a fan’s blades at about a 45 degree angle. Fins that are so angled are more effective than a straight fin. By designing a heatsink such that the fins conform to its path off the blades, this loss is minimized.

Another example of mitigating this effect are the Delta fans that incorporate vanes into the base – the vanes straighten out airflow, minimizing loss as airflow hits the fins.

So much for theory. What puzzles me about the BITSPOWER is why they attempt to take advantage of this effect in such a way that they don’t (note: this is my assumption about the design – it could be a marketing effort as well). If you look at the side 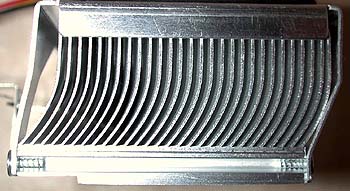 you’ll see that the fins are indeed curved. In order for this to work, the fins on each side of the clip must be curved opposite to each other. 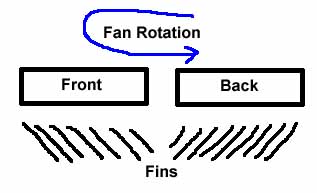 Now here’s the rub: If the fins are not so angled, the fins in the back are in fact fighting against airflow off the fan’s blades and are more ineffective than if they were straight. In fact the airflow is stalled so that half the heatsink is working at 100%, and half is working at far less.

If you look down into the heatsink’s fins 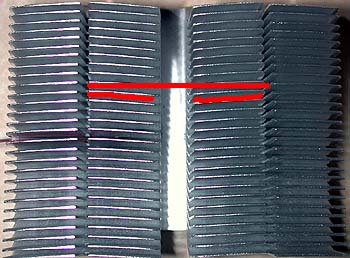 you’ll notice that they do not lie in a straight line, but are slightly angled. I think this is an attempt to adapt to the fan’s radial airflow pattern, although the angle is fairly small.

I give BITSPOWER credit for attempting an interesting design, but execution is questionable. 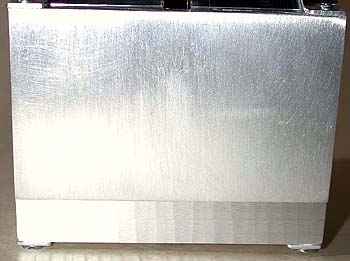 is smooth and there are no discernible machining marks. The clip is a good one – there is a shelf that you can easily grasp with two fingers so that mounting on the socket is easy.

I prepared the BITSPOWER by boring a hole completely through the base so I could epoxy a thermocouple above the CPU. The thermocouple is attached to an Omega HH23 Digital Thermometer. Ambient temps were measured with a thermocouple placed about 1 inch from the fan’s intake. I used Prime 95 to stress the CPU on an Iwill KK266+, Iwill BD133u (MBM temps are on-die) and Abit KT7. Arctic Silver grease was used in all tests. CPU Case Temp is the temp at that point where the CPU contacts the heatsink, CPU Back Temps are measured by a thermocouple on the center back of the CPU.

I tested the BITSPOWER with the stock fan and a Delta 38. I also tested it on the CPU Die Simulator, as noted below.

The BITSPOWER has some real problems delivering aggressive performance, due, I think, to the heatsink’s airflow stalling. Note, however, Motherboard Monitor temps – look darn good! What’s happening here is very interesting: The fan is blowing LOTS of air at a downward angle onto the motherboard. This does add to CPU cooling, but not to the degree indicated by the in-socket thermistor.

Totally unaffected by board cooling is the CPU Simulator, which shows an in-die C/W of 0.54 (analogous to the PIII die temp) and a C/W Case of 0.40 (from the thermocouple mounted into the heatsink’s base), which again is in the ballpark for PIII C/Ws.

As a final test, I ran it against a Glaciator II to see if it could match its overclocking performance, and found that it was stable at least 16 MHz lower and was 5 C higher in Motherboard Monitor. The readings using the motherboard’s in-socket thermistor might be misleading.

The BITSPOWER NP80D comes in above what we’re comfortable recommending for aggressive AMD cooling.