SUMMARY: An interesting entry from a new watercoolng company. 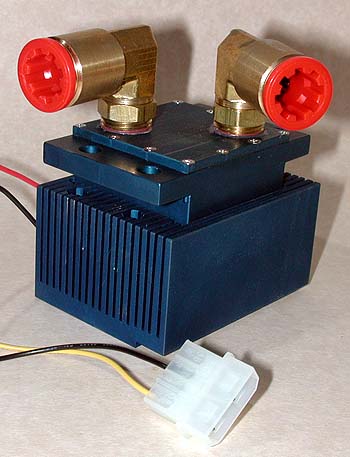 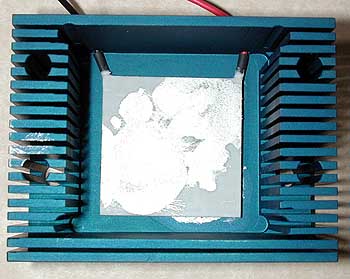 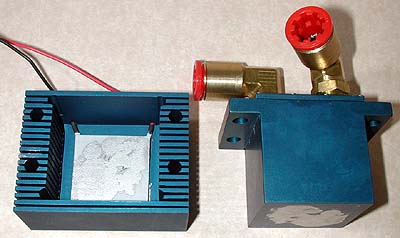 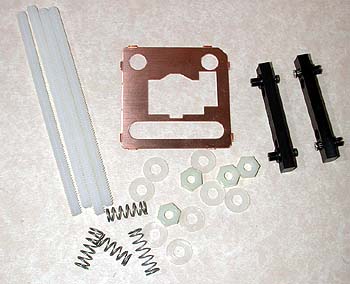 The good guys at Blue Cooling were nice enough to send a sample of their peltier waterblock, model MPP85W. Blue Cooling is a new entrant to the watercooling market.

In summary, a fairly conventional aluminum extrusion heatsink with a very secure and easy to use clip.

The SLK600 was first tested on the CPU Die Simulator which gives results that are unaffected by motherboard influences. I then tested it on an Iwill KK266+ and Shuttle AK31, modified to read AMD’s on-die diode, as an example of what users might see on their systems.

Die Simulator results place the SLK600, with the ultra-noisy Delta 44, in the top rank of heatsinks (Heatsink Ranking). With the more tolerable YS Tech, the SLK600 ranks among the best of heatsinks tested.

Interestingly, the difference between a relatively quiet YS Tech 26 cfm fan and the noisier Delta 38 is not that great. Users might consider using a rheostat on the aggressive Delta 44 or Delta 38 to moderate noise as requirements dictate. For users seeking superior performance at low noise levels, the SLK600 with a 26 cfm fan looks promising.

Thanks again to Blue Cooling for sending this our way.

The other day, SG Overclockers wrote a piece questioning the general integrity of the hardware review system. We certainly don’t disagree with anything said in the piece, but we think some more points need to be made. It’s Time and Read More

Intel Discontinues 1.6A Here’s the announcement from Intel. When Intel discontinues a processor, they usually give a future date for discontinuance of the product, then post the last date vendors can order these things. This time, discontinuance is now, and Read More