A lot of financial types feel that AMD needs to stop spending so much money on fabs. AMD said that they were going to pursue an “Asset Lite” strategy, which made the financial types happy for a while,

Well, boys lie, or at least it looks that way.

Back in June 2005, at an earlier analyst conference, AMD provided this nice little slide: 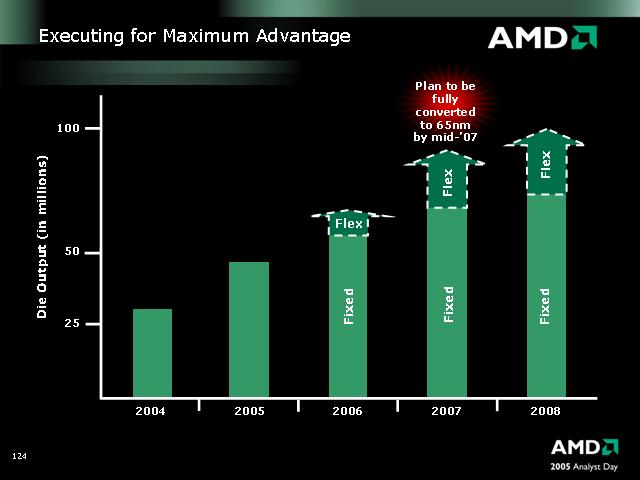 Two years later, in the middle of fiscal crisis and demands that AMD outsource more production, they provided this nice little slide

Now I may be blind, but looking at those graphs, the 2007 AMD certainly isn’t planning to outsource more in 2008 than they said they would in 2005. If anything, outsourced production looks to be a little less in sheer units, and definitely less as a proportion of total production.

Indeed, the “outsourced” estimates may be even less than indicated because, in what may be an exceptionally brazen move, slide 153 seems to say indicate that any production from the renovated Fab 38 in 2008 and early 2009 will be considered “flexible” capacity. That means that much of the “flexible” capacity (which people have taken to be outsourced production, because that’s what it’s been up to now) will actually be AMD’s.

Even if that’s not so, there’s certainly no planned increase in outsourcing CPU production.

One financial story said that AMD’s “Asset Lite” strategy remained “fuzzy.” There’s nothing fuzzy about the strategy at all, they’re basically not going to do it. All “Asset Lite” seems to mean based on the slides is “slow down Dresden renovation.”

The Athlon 64 3000+ has been released, and it is available for as low as $240. Should you buy one? The answer to that question is another question. Do you want an expensive quick fling, or do you want a