After the early demise of my MSI GeForce 3 Ti200 and the attempted replacement of it with a GF4MX420, I purchased a Jaton 3D Force III. After opening the package, I gazed in at the sight of my new card. The card was cooled by one small aluminum heatsink, and there were no ram coolers.

I thought… no problem – Thermaltake makes some really cool ramsinks and well, I was in a blue mood that day. I purchased the ramsinks and a blorb for good measure; after the install I was ready to juice the card. 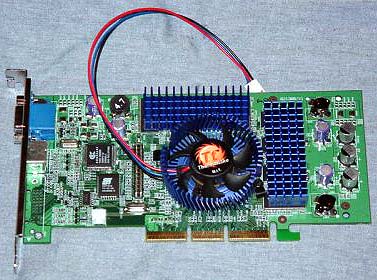 To my horror the chip would overheat at around 185 Mhz… Not good, since my MSI would go to around 225 Mhz and be stable. After taking off the blorb, I realized that the heatspreader on the chip was exposed and that the Orb was making very little contact with the chip itself. 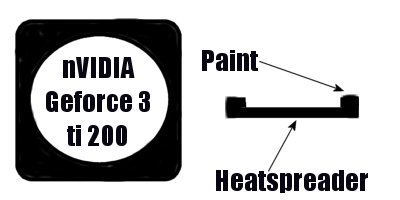 After trying a ton of thermal grease, I could get the card to around 200 Mhz, but that still wasn’t good enough. I decided that I wouldn’t try to sand the heatspreader, so the only thing to do was bridge the gap.

My idea was to use copper sheeting to bridge the gap and make it flush. After my local hardware store just laughed at the idea of actually carrying copper, I made my own bridge. 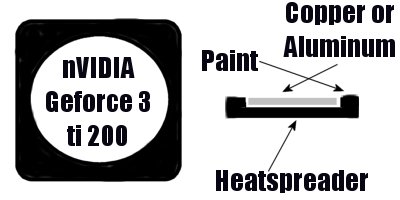 First I tried aluminum foil sandwiched between the heatsink and the heatspreader. This brought me up to around 205 Mhz – I was reaching my goal slowly. Next, after some thought, I realized that we have nice copper pennies. After several minutes of hammering and 3 times in a vice, I had a very flat penny the size of the exposed heatspreader.

The final product looked something like this when sandwiched: 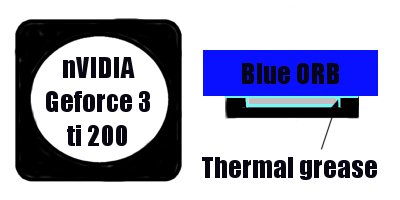 After sandwiching the penny between the heatspreader and heatsink, I could finally reach my goal of 225 Mhz. This is pretty much the physical limitation of a Ti200 – after that they just crash (Yes I do know of the voltage mods.) The penny was still larger than the gap and this never turned out to be a big problem, as it seems most of the heat is made in the center and just the area of the squashed penny was needed.

This is a quick and dirty mod which works exceptionally well, but if you can, use real copper slugs… The moral of this story however, is that MSI thinks the GF3Ti200 and the GF4MX420 are on even ground and there is no price difference… Gotta’ love morals.

PowerColor has released their latest 7800 series video card, the PCS+ HD7850. Factory overclocked, and armed with PowerColor’s Professional Cooling System, I think its time we took it for a joy ride!

Taking The Shim Off A Radeon 9700 Pro