I’m sure all of us at some time have been attracted to the art and science of CPU water-cooling. Many articles and forum posts have shown that water, by nature, is 2 to 10 times more capable than air at removing heat (depending on flow rate, turbulence, delta-temperature, whose figures you read, etc.).

Most cooling-related web stores offer complete water-cooling systems, and advertisements and reviews for waterblocks and other water-related components seem everywhere on the ‘net. Once the domain only of the geek-fringe, water-cooling has become mainstream and accessible to all.

The forum posts, however, are full of sob-stories and near-misses from us neophyte watercoolers. The same rig that seemed so buff on the web site has managed only 3 or 4 degrees difference from the heatsink and fan you were previously using. I, myself, plunked down that $120 for a ‘junior-cool’ water-cooling kit, only to find myself within 4 degrees of SK-6 territory.

We start exchanging ‘Baby-Rio’s’ for ‘bigger-Danner’s’ and swapping tubing sizes until our very souls begin to reek of WaterWetter. Almost invariably, the WC kit gets RMA’ed or parked in the garage, and we return, sulking, to the SK-6 that, while meek in the bragging-rights category, poses no threat to drown our valuable electronics.

The primary problem, as I see it, is that water-cooling is attended by more flash and folklore than science. This is easily observed in the ‘Waterblock of the Week’ hysteria featured in the forums, as this month’s bull becomes next-month’s hamburger. One week, some unobtainable metal is the absolute pinnacle of scientific achievement, and the next week the blocks are being used as ashtrays by the support-room staff.

The web is full of convincing anecdotal tests and comparisons, but the lack of standards for test methods and criteria limits our ability to extrapolate results from one test to the next. The net sum of all the water-cooling experience in the world is a hefty chunk of knowledge, but until we all get together and compare notes, we toil separately in darkness.

The brightest ray of science-light so far has been the breakthrough article by Bill Adams, “Radiator Heat Dissipation Testing”. Using standardized conditions and criteria, Bill analyzed the most fundamental element of water-cooling, the heat exchange process itself. Bill is a controversial guy, but if you don’t do anything else this year (the taxes can wait), please read this article.

In a nutshell, Bill showed that most of the high-sex components we had been coveting on the websites could move about as much air and water as trying to blow Jell-O down a soda straw. Bill tells us: to achieve water-cooling success, we must practice ‘hydrodynamic aerobics’ – the cooling process is dependent on moving as much air and water through our system as practical. That $65 ‘Big Cube Mofo’ radiator you’ve been using has about the same ‘aerobic’ capacity as a clay brick from your driveway.

I read that article and walked around mumbling for days. I read and re-read all the tests and comparisons of components I had seen before and came away with new conclusions. I dug through the tennis racquets and dead bugs in the garage and resurrected my old ‘junior’ water-cooling kit. Now I see why all my previous efforts were doomed!

I decided to re-visit water-cooling, armed with Bill’s insight. My standards were simple:

I began to haunt Ebay for components. First, I scored two precious ‘Serck Aircraft’ heat-exchange radiators for $15 each ($425 new): 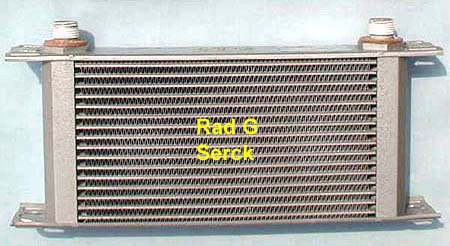 Bill showed that this radiator moved up to 5 times the water and air of any ‘website’ rig, and provided a proportional increase in cooling power. I was convinced that I only could achieve maximum cooling with two (or more) radiators.

Many forum discussions debate their use in series or in parallel, but Bill pointed out that radiators work best when the delta-temp is highest and that the parallel arrangement was superior.

For cooling, I also found (4) 120mm, 115-volt AC fans ($5 each). The DC-current fans we all use make airflow primarily with blade speed and noise (cfm with rpm). These ‘Nidec TA-450’ AC fans have more ‘torque’: 105 cfm at a slower blade rate (but higher blade ‘pitch’) and significantly less noise.
{mospagebreak}

Bill also showed that while most of the pumps we use advertise prodigious numbers for flow rate, the ‘installed ‘ flow rate can be far less than expected (my ‘500 gph’ Danner barely made 30). The characteristic of choice for a water-cooling pump should be pressure, or pumping head, not ‘gallons per hour’.

Accordingly, I researched and found that high-capacity aquariums utilize two types of pumps: a ‘high-flow’ unit to provide maximum circulation, and a second ‘high-pressure’ unit to push water through the filters. More important, aquarium fish are highly sensitive to temperature changes, and these pumps use isolated impeller systems so that minimal heat is transferred to the water.

Bill also found that right-angles and small tubing eat flow rate. My system would utilize mostly ¾- and 5/8-inch tubing, rather than 3/8. I had to use a set of quick-disconnect bulkhead fittings so I could move my computer, although these can seriously restrict flow.

I found a pair of high-flow Hansen ½-inch fittings on Ebay for $10. There were plenty of ¾-inch and larger sizes to be had, but these retail at over $200 each and command higher prices on Ebay. The ½-inch fittings, however, are used on tractors and other common industrial equipment and are much cheaper and easier to find.

I had planned to use a waterblock designed by Jurij Strasek of Slovenia, Europe ([email protected]): 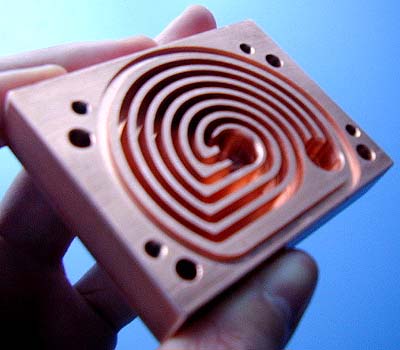 His block is designed to maximize flow rate and would complement my high-rate system. At the last minute, Jurij wrote to tell me that he is working on a newer design that utilizes small flow-disrupters to promote turbulence: 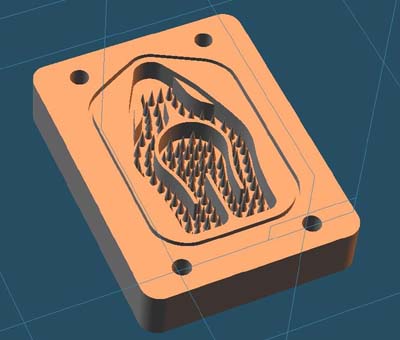 So, for now, I used the ‘waterblock of the week’, the ‘Gemini-Cool’ hi-flow spiral, the winner of Hoot’s Shootout. The design of this block limits fittings to 3/8-inch diameter tubing. 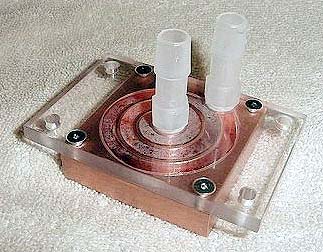 A photo of my rig is shown in below: 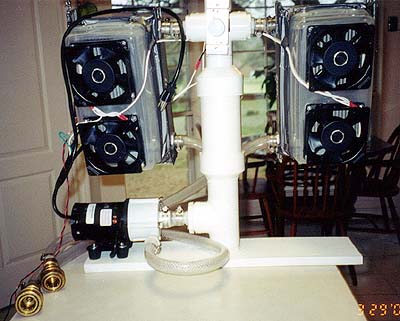 I used PVC pipe and fittings to make a combination water reservoir and radiator support. I used 3/4-inch vinyl tubing for the radiator and return circuits and 5/8-inch for the supply side. I was limited to 3/8-inch tubing from the quick-couplings to the waterblock, so I used silicone-rubber for its superior flow rate. 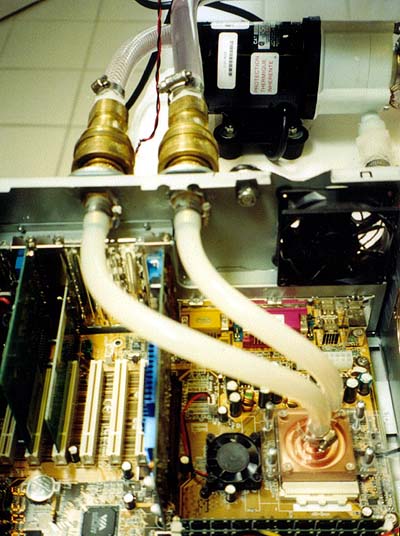 Flow is returned from the waterblock and splits to the two radiators, flowing upward through each to empty into the top of the PVC reservoir 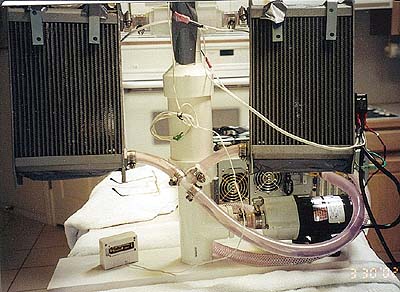 Total capacity of the system is just under 1 gallon (distilled water + 5% RedLine WaterWetter). I use an Ace Hardware Ceiling Fan rheostat to control the 4, 120mm fans. The fan shrouds are made from Ace Hardware food-storage tubs, supported by ‘L’-brackets and sealed with foam weather-stripping and duct tape.

The flow configuration is ‘pump-waterblock-radiator’. This configuration issue is hotly debated in the forums, but Bill Adams has argued that the highest flow velocity and pressure is found downstream from the pump, and that waterblocks work best at higher velocity and radiators at lower (more residence time equals more heat exchanged).

It certainly was proved in my system: I found a 3-degree Celsius increase with the reverse configuration.

I have to say that I was stunned at the performance.

I found that my system temps (after warm-up) would equilibrate at 10 repetitions of the Burn-in Wizard, and further temperature increase was not seen at up to 30 reps. The net result: I have not yet seen the high side of 28 degrees Celsius (CPU) using any application.

Let the flames begin – I’ve done my bit for anecdotal testing! These are probably not ‘Absolute’ temperatures, but the relative performance of the heatsinks and waterblock can still be compared to ambient. I did not move the probe between tests (it is taped and glued securely to the motherboard), except to ensure that it was still making contact with the core.

I performed each waterblock test twice with the same result (CPU within 0.1 C). After the waterblock tests, I removed the block to ensure that the probe was still in contact with the core.

On the ‘Max’ setting of the rheostat, each fan is blowing into the shroud at a rated 105 cfm. The noise of the 4 fans and pump is less objectionable than that of a Delta 38, IMO.

On ‘Low’ setting, I set the fans so that I can barely hear them over the dual fans of my Enermax 431-watt power supply, quieter, in fact, than was the 80mm Sunon 50 cfm fan on the PAL8045. The Serck radiators are so efficient that even the moderate airflow on the “Low’ setting provides spectacular results.

I have not yet figured out a simple way to measure the actual flow rate, but I will measure it soon. Based on Bill Adams’ tests, I would estimate that I’m getting about 2 to 2.5 gallons per minute (120-150 gph) with the hi-flow (3/8-inch) Gemini-Cool spiral. With Strasek’s ½-inch block and 5/8-inch tubing, I would bet on 3 gpm or more. I also have not tested the new overclocking limits of my system.

Well, I called this rig ‘Brute Force Water-Cooling’, and it applies everything I’ve learned from Bill Adams’ writings in articles and forum posts. It is not suitable for fitting into a case or carrying to a LAN party, but I don’t think it’s possible to get better water cooling without a Pelt or chiller.

P.S. Save your emails: the radiators and fans from Ebay came from LONNY or [email protected] The pump and QD couplings came from private sellers.

Getting a P4 was a very big decision. Aside from selling my first born for a 1.5 GHz, even with my setup, I was concerned about heat. OK, OK – so I’m obsessed about overheating; you try living in Texas