What to do with a spare fridge – Virgil Scott

Having been watercooling for while, I began to yearn for a little more oomph out of my overclock. I started lurking through phase-change cooling forums looking for ideas. Direct die seemed to get the best results by far, but I don’t have the equipment (or skills for that matter) to fill and braze a phase change circuit. So instead I set my sights on what looked like a much simpler task – waterchilling.

Our fridge, at the time, was quite a character. It looked as though it had some kind of extraterrestrial growth in its main compartment. An almost spherical lump of ice that had somehow formed on the rear panel of the fridge – in the middle of the ice was a darker patch, something buried within.

In addition, ice formed on most of the walls inside the fridge, and then melted, formed, melted… until we ended up with a swamp of rotting vegetables and stagnant ice water. The freezer part of it worked great though – kept ice cream as hard as cement. It didn’t require much persuasion to convince everyone that we needed a new fridge. 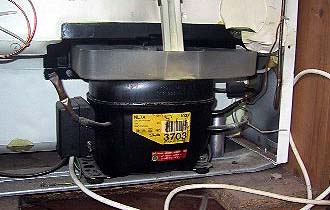 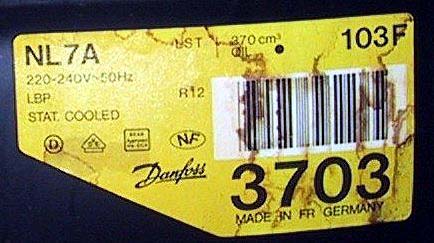 From what I gleaned from various forums, the fridge was particularly suited to the job due to its admirable size and capacity (nearly 7 feet tall with a decent compressor). I reckoned my best bet would be to take apart the fridge, leaving the cooling circuit intact (so that I could avoid having to refill the coolant gas), and house the components in a more manageable container. I’d be happy to get a CPU load temperature of anything significantly below ambient.

The only thing up for consideration with regards to changing the watercooling circuit was the waterblock. It was homemade (out of aluminium) and seemed to have an aversion to my copper radiator. I had a little chunk of copper and was thinking of making a simple #rotor or Lumpy Channel style block.

With the watercooling circuit unchanged, I’d simply drop the submersible pump into the same container as the evaporators from the fridge and fill the container with water and lots of antifreeze.

With the plan set out, I started dismantling the fridge; I smashed the wooden frame with a sledge hammer and tore off the metal side panels with pliers. Underneath I found a thick layer of cream coloured insulating foam – very brittle and crumbly. Somewhere inside the foam I knew there had to be some wires and copper tubes, so I tried to work very slowly and carefully to avoid potential damage. I started gradually chipping off the foam in small pieces. It took an entire day to remove the foam from just the fridge part (top half), at which point I realised my room looked like Santa’s back yard.

The insulation had crumbled into tiny pieces and covered everything. I’m sorry I didn’t get any pictures of it. I thought it was hilarious, but other people in the house didn’t find it so funny. As I walked in and out of my room, I tracked snow all over the house.

After tidying it up, I had two and a half bin-bags full of creamy snow: 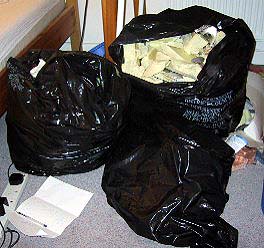 With no insulation to support it, the main fridge compartment came off very easily (the metal side panels can be seen underneath), with the exception of the thermostat, which had to be cut out with heavy duty scissors. It turned out that the dark matter in the ice was a beetroot. 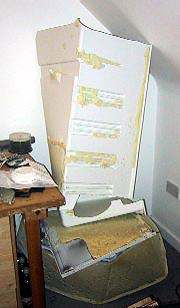 I then bent the cooling element from the fridge over into the freezer compartment so that all of the evaporator was in the same place: 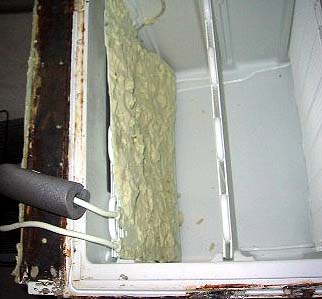 I thought I’d better test it after making this bend. It turned on fine and chugged along for about 15 seconds until it started making loud, rattling noises vibrating the whole unit, and then stopped dead! I pulled the plug and inspected the bend in the tubing only to find a small kink – a little adjustment seemed to do the trick and it fired up fine again.

I decided it would easiest to leave the freezer part intact and take advantage of the existing insulation and lid rather than trying to build a more compact container. 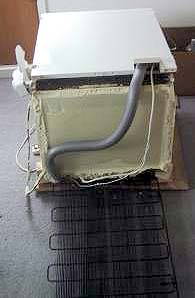 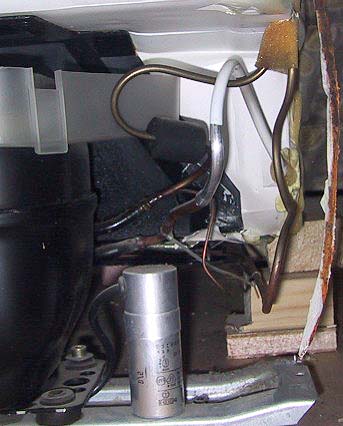 Thankfully the tubing remained intact and I could now fit the wooden base and frame. The condenser (big thing with all the black narrow-bore tubing) also had to be bent by 90° in order to make the whole thing more manageable to carry around. 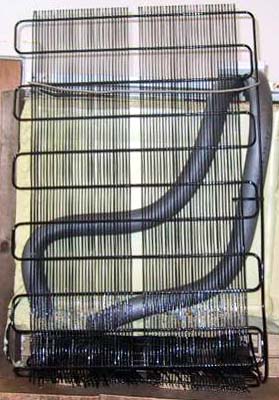 I then fitted the wooden frame, consisting of six beams, each bolted into the freezer compartment: 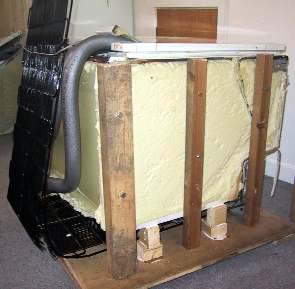 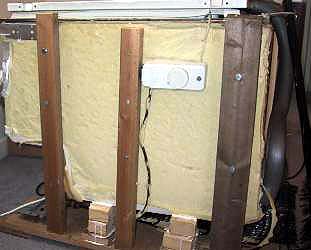 The compressor was bolted into the base plate to keep it from exerting too great a force on the brazed copper tubes: 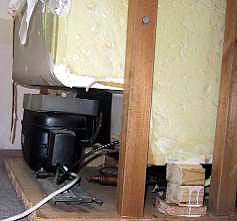 Here’s a view inside the freezer compartment: 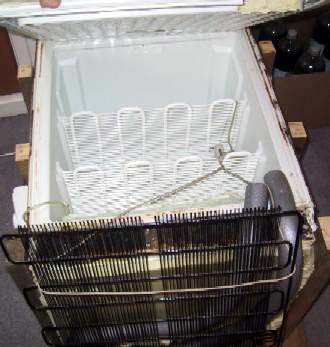 Apart from a few final touches, the chiller was finished! I started shifting it out of the door so that I could bring it downstairs to the computer room. After ten minutes trying to squeeze it out the door I realised that it was just too big. I took a saw to the base plate and shaved off as much as I could and it now just about makes it through the door if you’re forceful enough.

Once downstairs I filled it with water and antifreeze, plugged it in and waited with a thermometer – hoping to measure how far below zero I could get it.

After about two minutes a plume of white smoke spewed out from its rear. The smell was awful. I lunged for the mains plug and cut the power. The source of the smoke appeared to be a small electrical box on the side of the compressor. 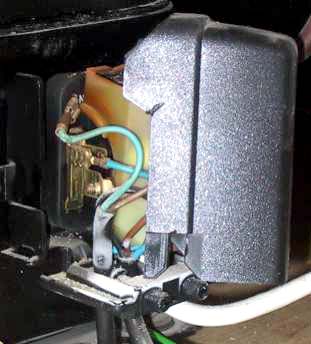 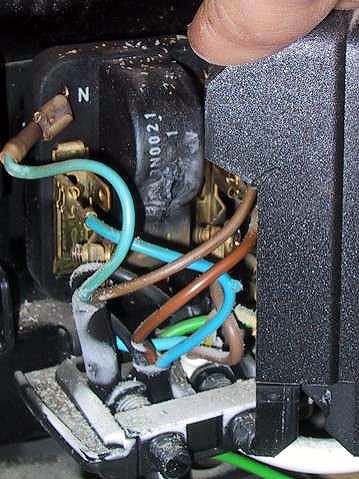 The only thing I can think of that might have caused this was when I reattached the thermostat – perhaps I wired it wrong. I would have thrown the whole thing out the window by now but it doesn’t fit. It was a real shame as it took a lot of hours to build, but I suppose it was a learning experience.

If I ever come across an unwanted fridge, I’ll know to be a little more careful this time.

Some time ago, I made a fandapter for my PEP66 peltier I bought from PelTEC; this thing seriously improves performance and allowed me to run a quiet 40 cfm, 80mm fan on my PEP. I made it from a hand