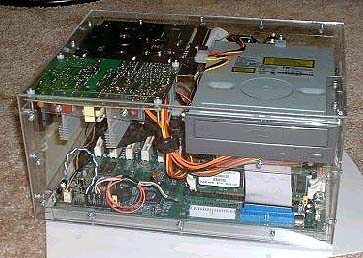 This project was a fun idea, but as I told my friend, “If I could do it again, I probably wouldn’t.” Not really, though. Like most of my projects, it always seems like a good idea until you find yourself actually dealing with all the nitty-gritty details as you go along.

So actually, if I could do it again then I just might because it would be at least ten times easier – lots faster – and probably look a lot better, too. Nonetheless, I am actually very pleased with the results, particularly for it being my first attempt at this. Maybe someone else can learn from my efforts.

Total time to build: One Weekend.

Previously, our HTPC was sitting inside a small computer cart/desk. Having grown tired of a computer desk always sitting in our front room next to the TV, I wanted to put it in a smaller case that would fit on a shelf inside our TV cabinet, and then get rid of the monitor altogether, using only the TV for a display (which is perfectly fine if it remains only an HTPC). So here’s how it progressed.

That’s it. The plexiglass sheets were under $6 each at Lowe’s, the fastening hardware a few dollars total, and the corner protector about $3. They even cut my pieces for free of charge.

Okay, a few comments from me, but the pictures speak mostly for themselves… 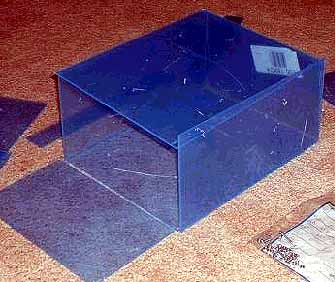 First chance to finally see the actual size of the case, no longer just numbers and lines on a piece of paper. 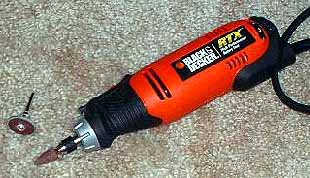 These are the only two Dremel bits I used (not counting the extra disc that I broke). I also used a power drill for the holes, a razor blade to cut the corner wall guard up, and of course, screwdrivers, pliers and wire-cutters. 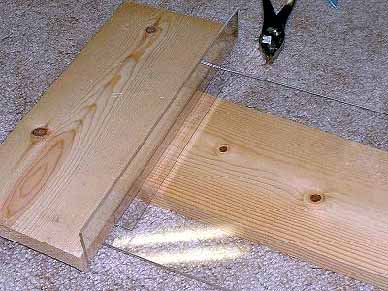 Aligning the wall guard. It is held in place with double-sided tape while drilling the holes. 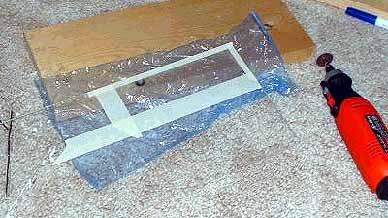 Masking the drive opening this way worked well. I used the disc to rough cut it close to the tape, then used the other bit to finish and smooth the edges. 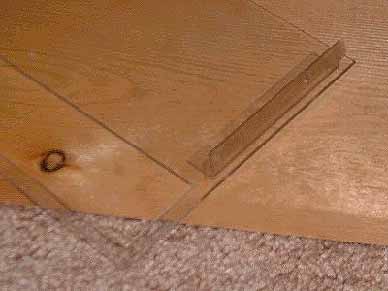 Drive bay finished, and you might be able to see some of the tape. 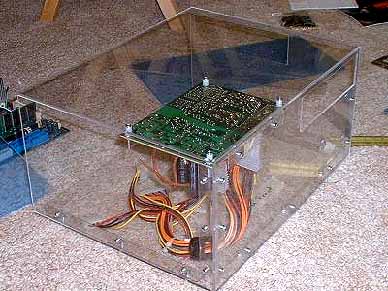 First test of the fastening system – worked well. Power supply was obviously removed from its case, being careful to avoid those capacitors. The plug and the switches were also cut away.
{mospagebreak} 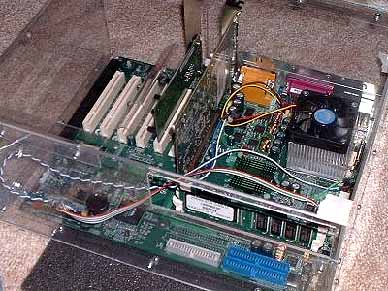 Checking the fit of the motherboard and other internals. I used a six-inch height instead of four (with DVD mounted over the expansion slots) so that if I ever want to use this case for a desktop PC instead of a HTPC, I’ll still have the room to access to all of the PCI slots. 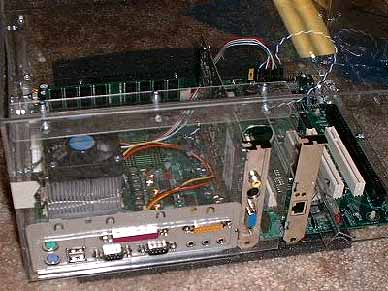 Setting up the back plane area. A lot of this was worked out on-the-fly. Still need the cuts for plug, switch, and fan-control knob.

After cleaning the plexi, the assembly finally begins… 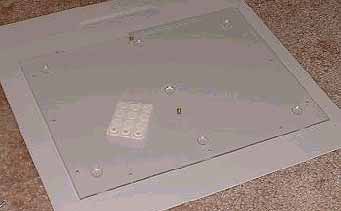 Clear rubber feet. I drilled only two holes for motherboard mounts. The rest of the motherboard is held using the plastic standoffs. 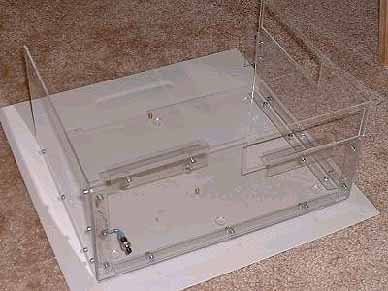 The walls are in place. The pictures don’t show it, but every nut and bolt also uses a lock-washer. This is important: The softer plastic of the wall guard worked perfectly to grab into, keeping the nuts from coming loose. 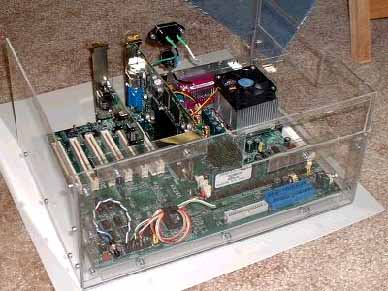 Motherboard goes in, back plane has plug and switch. Front power switch is connected. Hard drive and power LEDs are positioned to be well visible. 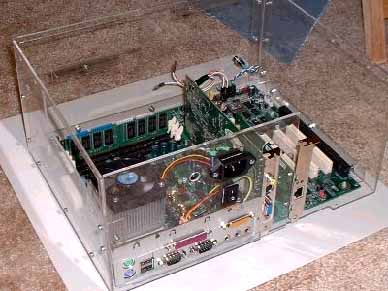 Back side view. You can also see the bottom cutout needed to accommodate the cards. 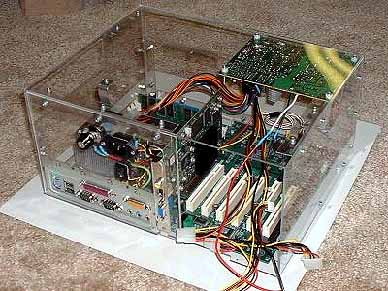 Top is fastened into place. By the way, the reason for the extra drive bay opening in the side is that in my excitement to get started, I mixed up the pieces. It never should have been there, but it turned out to be quite useful for inside access once the top was on.

It now also provides good air flow for the CPU area anyway. You can also see in this picture the clip used to hold up the back end of the DVD drive, as well as the rheostat used to control the fan speeds.

Finally, the DVD drive is in as well as the hard drive, with not much room to spare.

In retrospect, it could have been a little better, but it accomplishes the main objective, which was to allow me to put the case on a shelf inside the cabinet and under the TV. The first go-round always has some kinks, which only means that if I ever do this again (translation: If my wife lets me trash the entire front room for a couple of days again) then it should be even closer to exactly what I want.

You can probably buy things like this pre-built, or use a laptop for your HTPC, etc. But there’s an extra satisfaction to doing it yourself. And remember, total cost for all of the case materials I used: Under $20!
Yep, not too bad at all… I just need a wireless mouse and keyboard now. And maybe a light kit. And then…

Intel has a DDR board, the 845, but Intel isn’t going to turn the current SDR pumpkin into a DDR coach until after Cinderella shows up at the ball. Via has a DDR board, and Intel keeps saying “we’re going

Too Terrible To Contemplate? . . .

There’s been a lot of bad news about AMD this year, but a lot of people don’t want to hear it. I’m not talking about fanboys, but those who essentially say, “My God, AMD’s got to pull through, because if

AMDZone has a statement from an AMD PR person about 90nm processors. Let’s look at what it says, carefully: “Our transition to 90nm for AMD64 processors is on track.” Well, there are old tracks and new tracks. For instance, a