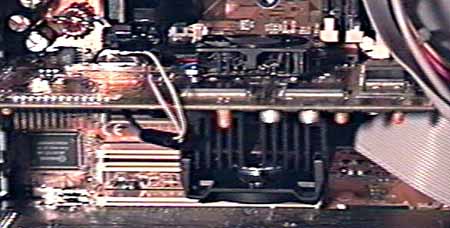 I just wanted to pass on something to the GeForce owners out there to
help cool their cards down to provide more headroom for o/cing.

I made a sandwich cooler using the retail hs/f from my 600E and mounted it on the GPU. I then put the original hs/f from the video card on top of the card were it gets hot also; I had to use 2
pennies (1982 or earlier for all copper version) to raise the
small hs/f on top above the level of the resistors at the top of the card behind the GPU. I sanded them down and cut them into square spacers; I also had to lengthen the power wire to the original video
fan.

Its an ASUS V6600 Deluxe with dynamic cooling turned off. I’m still doing testing, but I can o/c my memory all the way up to 195 MHz (max on ASUS tweak software) and core to 130 MHz so far with no crash in Q3 demo; I wanted to finish writing this before I try higher in case of a crash ;->

Intel recently started making some of their Pentium III 450 MHz processors from P3-550 and even P3-600 parts. It seems that they just set the internal multiplier to 4.5, but use the same silicon and cache memory, either Toshiba-300 (3.3ns)

SUMMARY: Leadtek’s little brother, the GeForce 2MX, compared to the GeForce GTS2 turns out to be not so little – up to a point. This is Leadtek’s GTS2 “lite” version. Turns out this card is not as “lite” as you