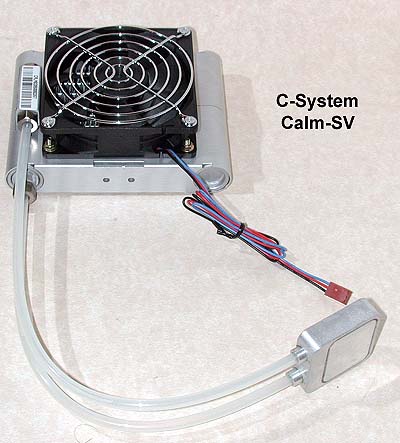 The kind folks at CoolingFlow were nice enough to send a sample of the Calm-SV product. This is a self contained, liquid cooling system which only moving part is a 92 mm fan – no pump.

The principle is essentially based on the phase-change principle. The Calm-SV consists of an evaporator (fits on the CPU), condenser (radiator), two tubes connecting them and a liquid which has a very low boiling point.

Heat from the CPU causes the liquid to evaporate (this is the phase change – from liquid to gas). This creates a pressure differential, which then drives the liquid up the tube to the condenser (radiator). Cooling the liquid removes heat and condenses the gas to liquid, which then flows back to the evaporator (at the CPU), and the cycle continues.

As the PC is powered up, in less than a minute you will see liquid bubbling up to the radiator as the evaporator starts percolating. Powering down the PC, the liquid will continue moving for about 1-2 minutes. If you place your ear right on the evaporator, you will actually hear what sounds like liquid boiling.

The condenser (radiator) must be higher than the evaporator. The unit ships with brackets to mount the radiator on a power supply.

The Evaporator is made of aluminum: 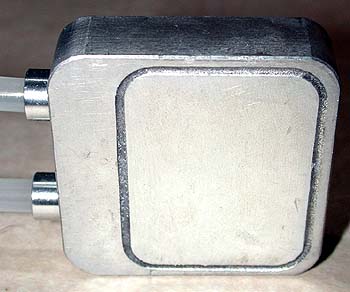 The base is reasonably flat but not polished. 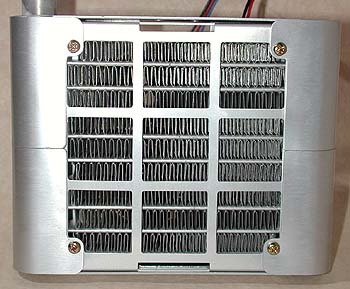 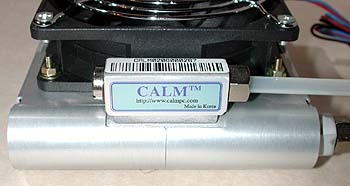 is a rectangular piece which, I believe, acts as a venturi. The gas exits through a small opening and then expands and cools in the radiator, then returns as cool fluid to the evaporator (at the CPU) continuing the cycle.

The Calm-SV ships with parts 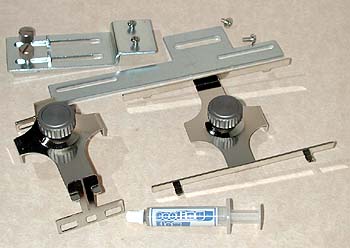 to attach the radiator to a PC’s power supply. Note that this will not work in small cases. Mounting brackets are available for AMD and P4 systems. Set-Up Instructions are available at this link.

The Calm-SV was first tested on the CPU Die Simulator which gives results that are unaffected by motherboard influences. I then tested it on a Shuttle AK31, modified to read AMD’s on-die diode, as an example of what users might see on their systems.

These results are not overwhelming. I believe there is a fundamental problem with a system such as this:

In order for this system to work, there must be a pressure differential to drive the liquid through the system – this makes up for the lack of a pump. As such, the system will not work if it’s too cool. As C-System states:

“The fan’s capacity is 36 cfm, if you would like to change this to a higher cfm fan, it could happen that the cooler will not operate. This cooler is an automatic-circulation-type driven by the difference of pressure, so if a high cfm fan is used in cooling, trouble will be caused between the difference of the pressure, which will cause a disruption in the flow of refrigerant…“

note: I have edited this for English.

So there you have it – for Calm-SV to function, it has to run at a temperature hot enough to maintain a pressure differential. In fact, if you place your ear over the evaporator, you can literally hear the liquid boiling. If it does not boil, it does not work.

No such thing as a free lunch – the Calm-SV is a low noise CPU cooling solution, but then so are a number of aircooled heatsinks. Maybe performance will improve, but as tested, at best it’s for “normal” cooling.

Thanks again to CoolingFlow for sending this our way. Vendors interested in this product, please email Young Choi.

SUMMARY: Global Win’s latest heatsink is all copper and a solid entry to good Socket A/370 cooling, although NOISE is a problem. The good folks at Global Win were nice enough to send me their latest – the all copper