UPDATE 2/23/08: Having used this unit since late December, I thought an update on its use might be in order.

Of all the features that this unit has, one of the MOST valuable is the “Detour” function. Let’s say you’re on the way to the airport and you hit a traffic jam or accident – you hit the “Detour” function and it routes you off where you are to an alternate route. I’ve lived in the NY area all my life, but the GPS detoured me through back streets flawlessly in avoiding highway jams.

This function saved my bacon at least four times already.

Some of you live on areas where the streets are laid out in nearly perfect grids; in the Northeast, that’s not the rule. Consequently in this area sometimes getting from point A to B may require local knowledge that takes years to assimilate. With a GPS – piece of cake! Even if you make a mistake, the unit recalculates quickly and leads you out of your mistake.

The only negative I have to say is that depending on where you mount the unit, you may get a reflection from the screen at night. I solved this by mounting an index card as a hood on top of the unit to stop this problem.

Overall, I can’t imagine leaving the house without my GPS – you’ll be surprised when it becomes indispensible!

I was confronted over the holidays with a change in plans which dictated that we travel some distance for our family get-together in an unfamiliar location. Verbal directions took the form of “I think it’s about 2 or 5 miles from some gas station” with multiple turns at questionable landmarks. This time I opted to try a GPS rather than print out multiple PC maps.

Now this all happens two days before Christmas – you can imagine the paucity of product. Luckily I found a Garmin Nuvi 200W at a local Staples (they had only four GPS units in stock) for $250 that seemed to fill the bill; the salesperson counseled “Try it – if you don’t like it, exchange it for something else later”. OK – sounds like a plan to me.

The Garmin comes with a suction cup mounting system (for the windshield), a permanent mounting disk for the dashboard, a 12 volt power cord and a “Manual” The “Manual”, while perfectly adequate to get started, consists of a bare handful of pages so lacking in depth that fully understanding the unit’s features required some exploring. Fortunately there are Help screens users can access, but don’t expect a lot of detail.

For basic “How do I get there” functionality, it takes maybe 5-10 minutes to get the unit up and running to the point where you are comfortable with it. After reading some reviews on the Nuvi 250W, I found features that were not in the “Manual” – for example, you can save an on-screen location by touching the location on the screen – nothing in the manual on that feature. Read all the reviews (two good sources: gpsmagazine.com and gpsreview.net) you can find on any unit you are interested in – you’ll learn more from that than the manuals.

Features not mentioned in the “Manual”:

So at least for some of the Garmin units, you’ll have to do some digging to fully understand included features.

Physically the Nuvi 200W is petite 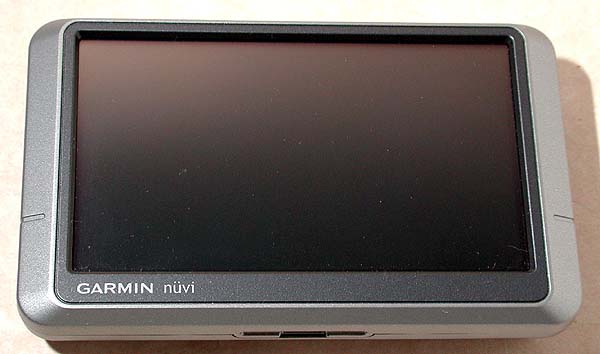 – it weighs a little over 6 ounces, measures 4.8″ x 2.9″ x 0.8″ and includes a rechargeable lithium battery good for six hours. The 4.3″ touch-screen display is 480 x 272 pixels and is very bright in daylight; at night the display dims and the colors change so it’s not glaring (feature not mentioned in the manual). The antenna is built-in. This unit announces turns (scads of languages to choose) but not street names – just “Turn right” etc.

the back shows the speaker and USB/Power Port: 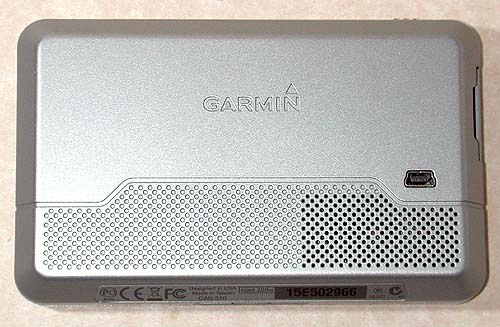 At the base of the unit is the reset button: 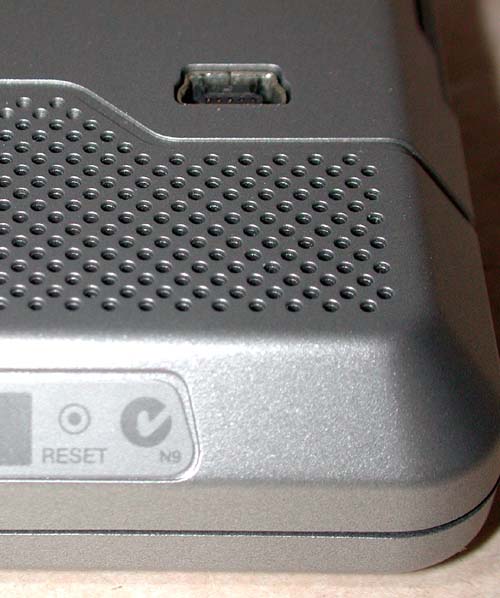 There is also an SD Slot which can be used to load additional features, such as maps and additional “Points of Interest” data – it can also be used to show pictures: 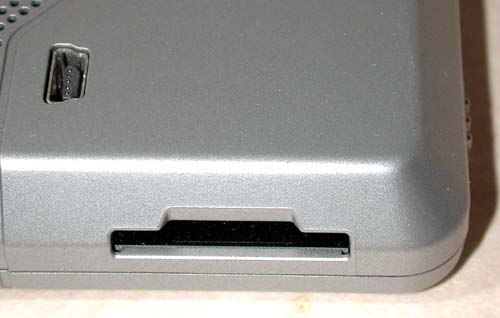 NOTE: These are screen-shots I took with a camera – the actual screen you see on the unit is not “grainy” – the screen images are smooth, clear and attractive to the eye.

The first screen you see on power up – good advice! 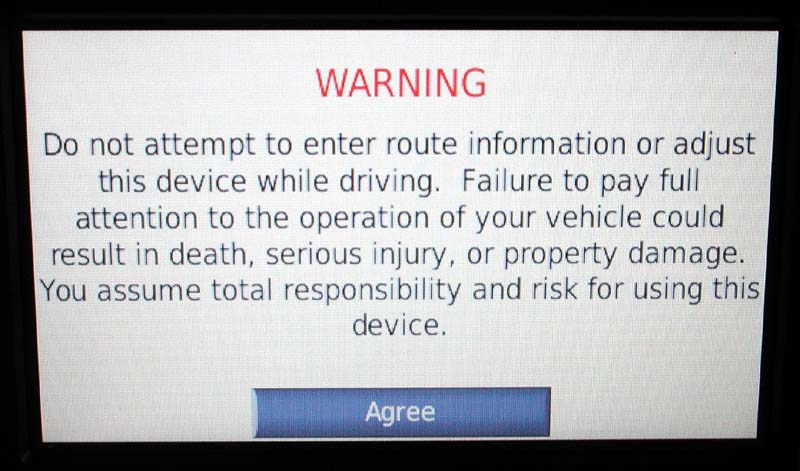 This is the main screen – very simple! 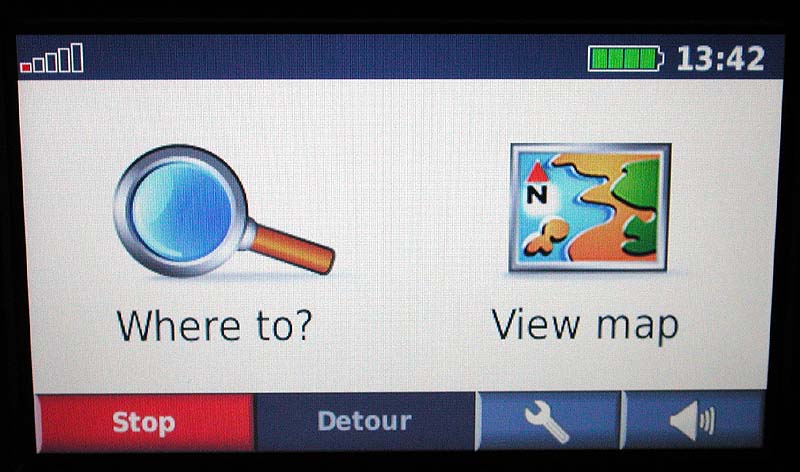 Pressing “Map” leads to this screen (note: it takes up to two minutes for the unit to lock onto satellites): 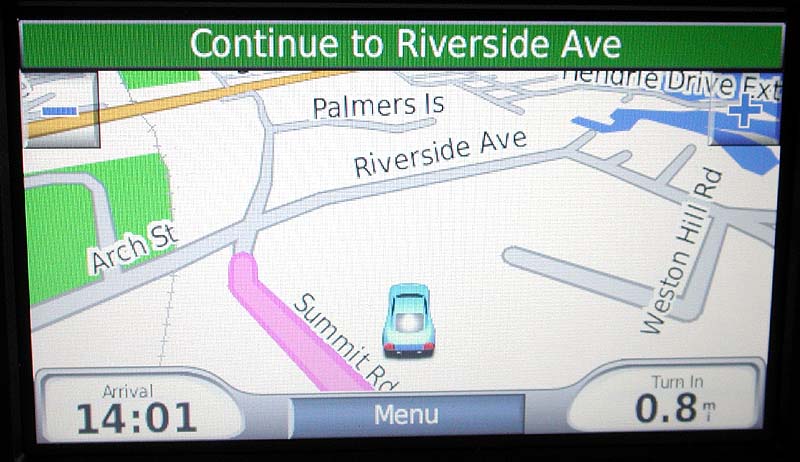 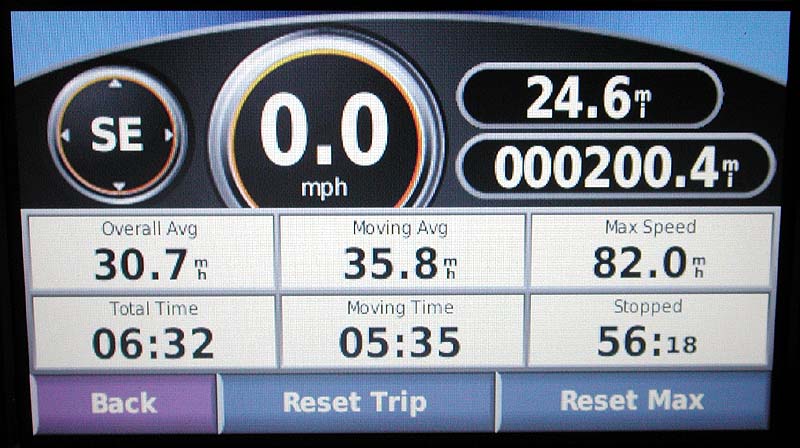 Pressing “Turn in” leads to a detailed turn list for the route selected with images: 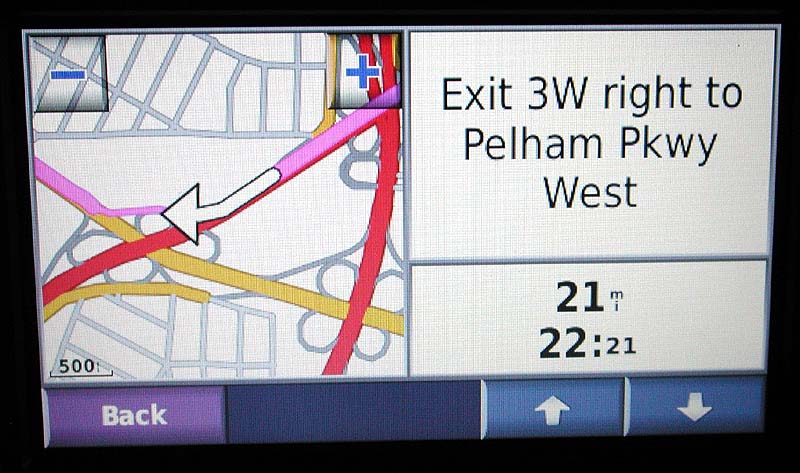 Selecting “Where to?” leads to these screen: 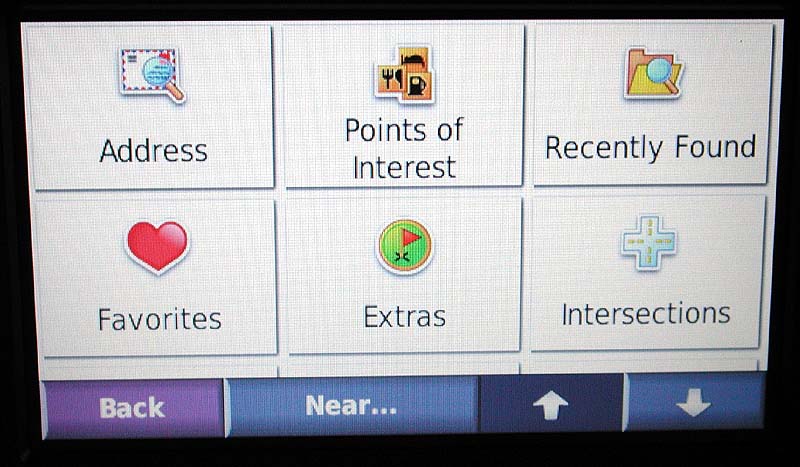 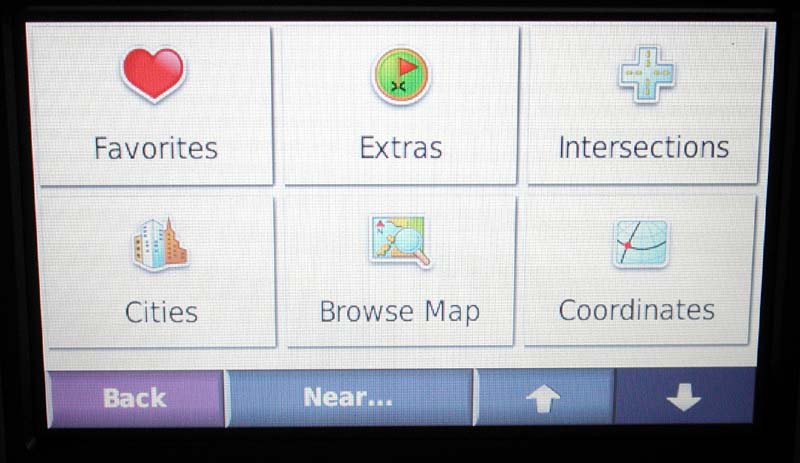 To input an address, you select a state, either selecting from a list… 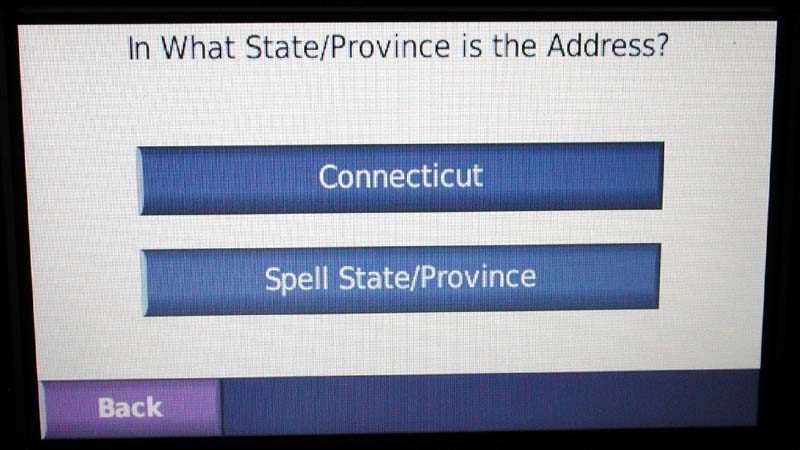 or typing the state using the on-screen keyboard. 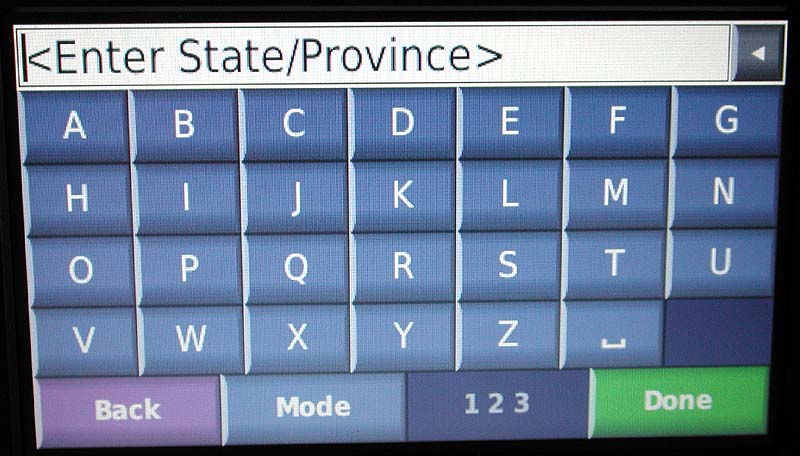 Selecting “Points of Interest” leads to a number of choices: 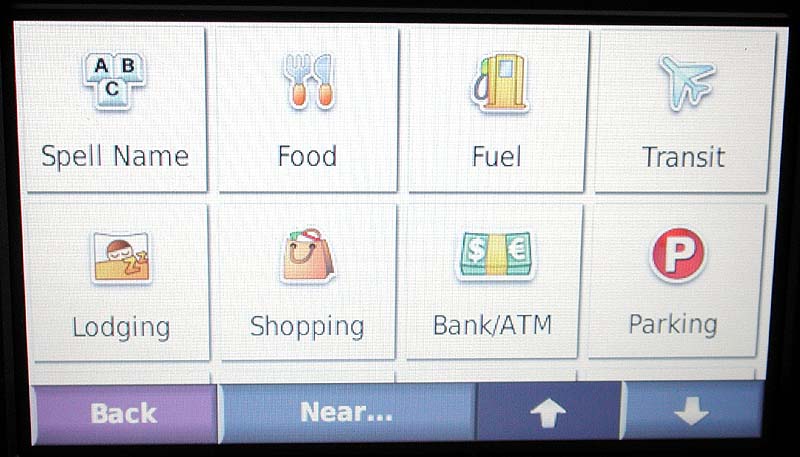 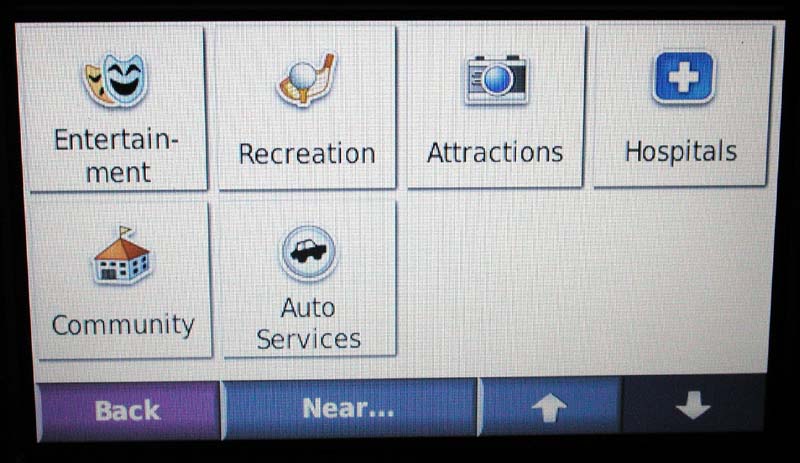 As an example, selecting “Chinese” from the list leads to a restaurant list near your current location 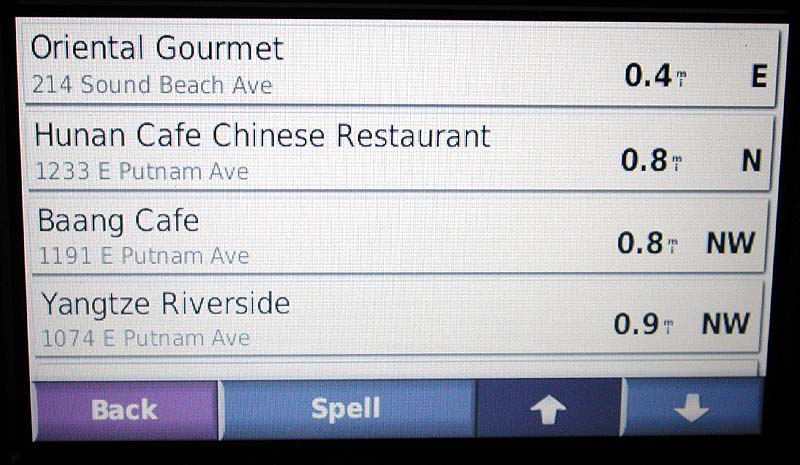 Overall, the current GPS crop sports features that make traveling so much easier that it’s a no-brainer. I’ve just scratched the surface of the available features.

My experience in using this unit is very positive – without it I would have spent more time asking for directions (or wandering) than I’d care to admit. I found it very accurate, easy to use and the routes selected were on-the-money.

Spending more money gets you more features, such as “text to speech” (vocal cues include street names rather than generic “turn right” cues), blue-tooth integration and real-time traffic routing. However, the basic GPS chip appears to be the same in all units, so I don’t think you get more accuracy.

In sum, I think this is one of the most useful electronic gadgets around.

These are AMD’s and Intel’s earnings and SEC reports. AMD could have a bad time of it for one good and one bad reason. The good reason may be falling flash memory prices. The bad reason is taxes. AMD has Read More

Having cracked two processors in a week, a Duron 600 and an Athlon 1.2, I set out to find a better solution. I ordered a shim online for $10, then the thought occurred to me: I could make my own! Read More

The other day, we pointed out that quad-cores were a waste were a waste for just about everyone now and anytime soon. Well, during the IDF, Intel did another captive benchmark series on its foursome, and could only find three Read More