I just wanted to share my latest computer modification venture with you all. I was worried about my total case temperature after I recently upgraded by video card to a PNY 128 Mb FX5200 Verto Ultra card. Of course, I immediately upgraded the GPU fan to accommodate my overclocking. But that, combined with additional cabling for the new secondary hard drive, left my airflow a little more choked off and my internal case temp up 3-4 ºC, bringing my CPU temp up. I felt that it was time for a system modification.

Buying stuff on sale from www.coolergarage.com, I purchased

All this for a grand total of $33.70 before shipping (~$40 total). Then I got some Plexiglas and superglue from Home Depot for a whopping $7.48 and began my adventure. Attached are all of the pictures in order of progression. 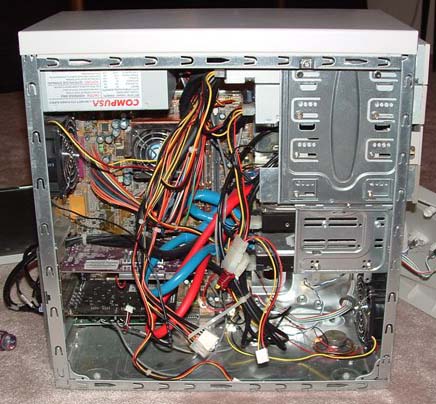 This was my computer case (with the round IDE cables) after I put the two fans in. 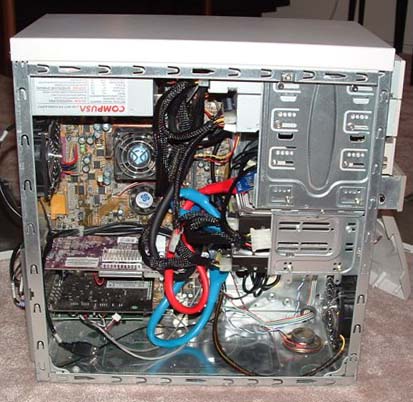 The case after the sleeving was applied. 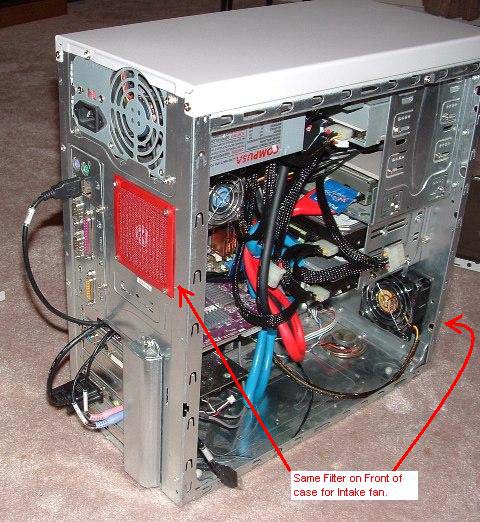 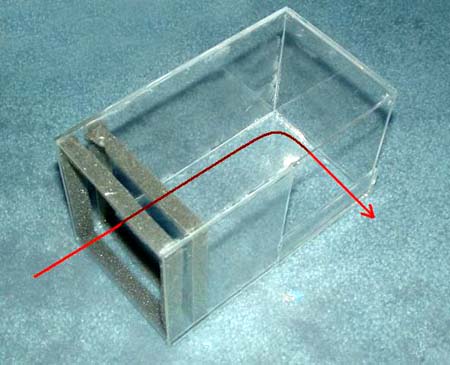 The construct of the air duct to bring fresh air from the rear fan directly to the processor heat sink. No screws are used here. I simply made the duct 1 mm larger on every side to mate with the 80 mm fan and secured it with some leftover ¼”, low-density weather stripping that I had. It holds the duct and seals the air-gap nicely. The arrows show how the air should move through. 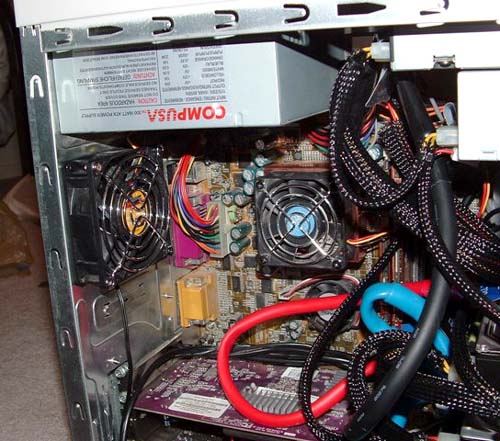 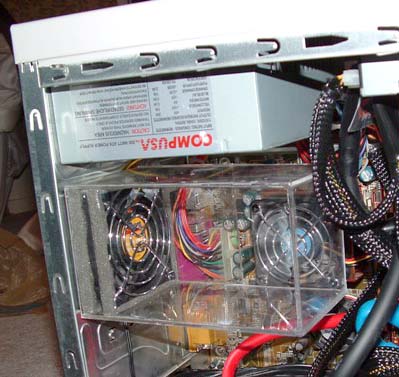 Now what the case looks like with the duct. 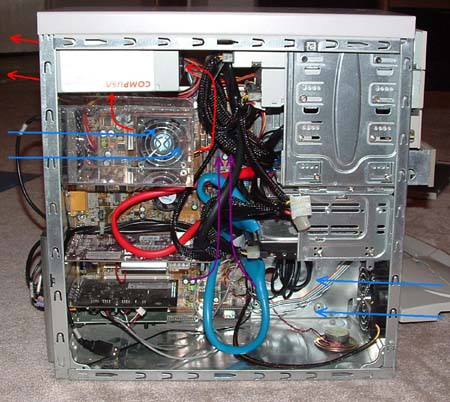 Another shot of the entire inside of the case with approximated airflow path. 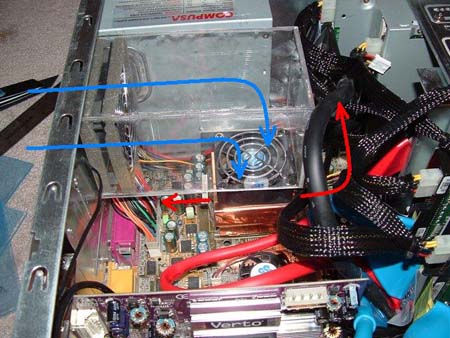 A close-up shot of the duct showing the airflow path. 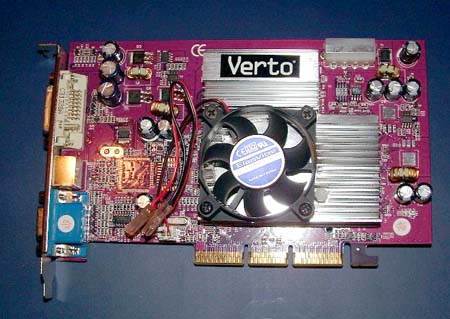 A top-down view of the card before the PCI-duct. 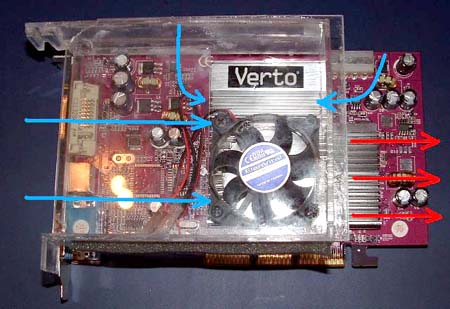 Now with the PCI-duct on top of the card showing the proposed air-flow path. Note: Just to the left of the fan, the heat sink does have a fin exit path that is blocked by an extra Plexiglas “wall” to direct all air-flow out across the right-side RAM-sink. Air can be pulled in by the fan across the upper RAM-sink which would otherwise be covered by the duct.

Another angled shot of the duct showing the screw-mount at the upper-left and additional blockage wall on the lower-left to mimic a card. 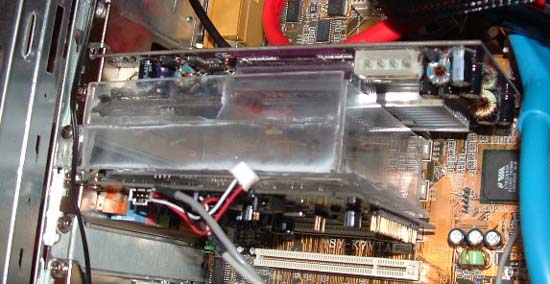 The card and duct installed in the case. 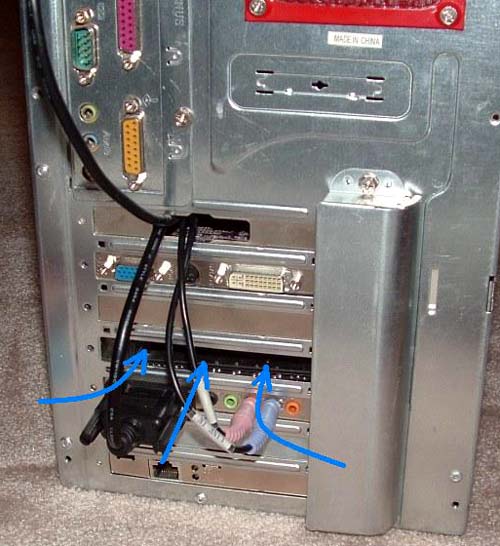 The exposed card slot converted to a duct inlet for fresh GPU air. 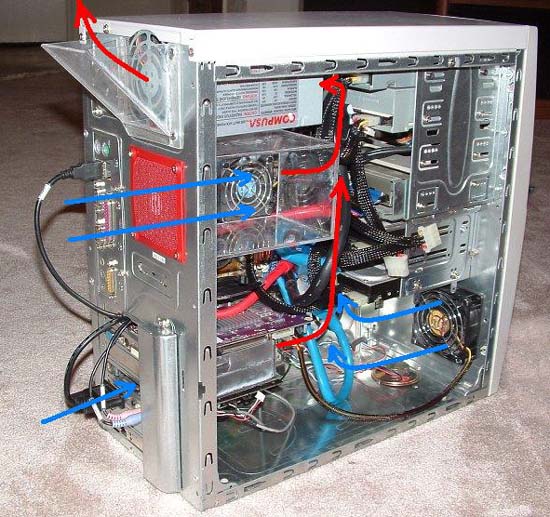 I was worried that the hot exhaust from the power supply would recirculate back into the CPU duct intake, so I created a small “chimney” to deflect the hotter exhaust air away. It mounts directly to the back using 3 of the power supply screws. 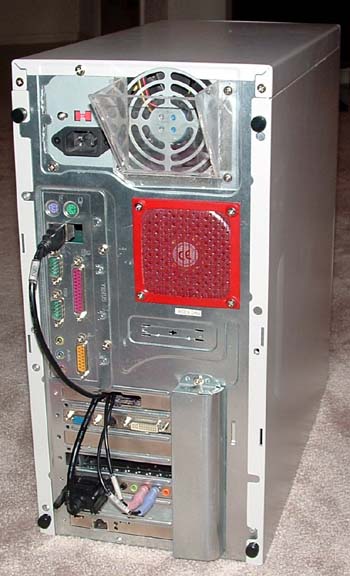 And now, since we’re all geeks… I took some data before and after. I ran the UT2004 benchmark (free trial download) in order to get max heat out of the CPU, GPU, RAM and hard disk in order to fully tax the system.

The reduction on the graphics card was phenomenal!

Even with an overclock of 25% on the GPU and GRAM, the card is now running cooler than the original manufacturer’s design without overclock! Very nice.

The nearly non-existent reduction in RAM temperature is partially due to the fact that now the CPU exhaust blows directly onto the first DIMM slot. However, the copper heat spreaders do distribute out the temperature considerably and dramatically slow down the rate of thermal ramp the chips experience, potentially aiding in the thermal cycling life of the chips.

The power supply exhaust temp increase is nice to see. Even though I have significantly increased the air-flow rate through the case (which should yield a lower exhaust temp if all other heat rejection characteristics remained the same), an increase in dT combined with an increase in flow rate tells me that I’m actually removing the heat from the case more effectively. I’m confident that I have dramatically reduced the number and magnitude of heat-trapping recirculation zones inside the case.

The drop in audible noise is attributed to the CPU and GPU air ducts “muffling” the 60 mm and 50 mm high-speed (5200 RPM and 4800 RPM) fans. Also, my old “primary” hard disk has developed a high-pitched “whir” sound in the last couple of months that Maxtor’s bearings are well known for. It’s a good thing the warranty went out only a month before the sound started! That was that last time I will every buy a cheap HDD on sale at Best Buy – it will hopefully be replaced soon.

The only other step I may take in the near future is to the intake fans. On this case, the grating holes in the metal where the fans mount are quite restrictive. I plan to cut out that material to reduce the pressure-drop at the intake fans. I’m not too worried about safety since the aluminum air filter works very well as a finger guard, too. This will probably decrease my audible noise as well since there is a barely noticeable “whistle” when you put your ear close the case.

Well, that’s how much of a nerd I am… all for less than $50 (less than the price of a good CPU heat sink or a high-end overclocker’s GPU replacement sink)!

I’ll keep you all updated on my next adventure… converting an old PII 450 into a file/media server. We’ll see how that goes.