These claims have yet to be substantiated, but it is likely the performance gains are minimal. The most interesting part of this driver release is ATI’s claim that the new drivers boost 3DMark Vantage scores, specifically: “overall scores improve up to 5% on a single ATI Radeon HD 5970.”  Forums members began testing out this theory earlier today, Jaym14 reported a 3000 point or 9% gain in his Vantage GPU score on the following system: 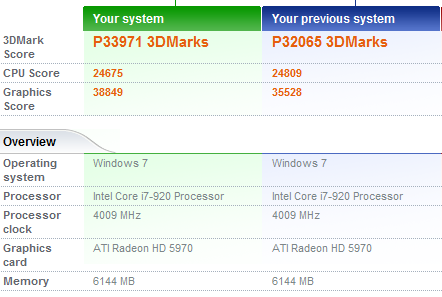 More testing will reveal the true value of the new drivers. Several of the OCF Benching Team members that I spoke to agree that 10.4 is still the best Catalyst Driver package for benchmarking, especially for 4000 series cards.

The release notes also stated that several games, specifically with crossfire, will see performance gains including Batman: Arkham Asylum, Crysis Warhead, Aliens vs. Predator DirectX 11 Benchmark and Wolfenstein (had to mention it, since its my favorite game series of all-time).