SUMMARY: Fixing mechanical CD ROM jams is not all that difficult. 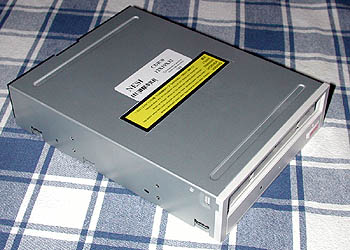 This unit was manufactured by Panasonic.

A friend of mine happened to jam her CD Burner’s tray – somehow while moving a chair she managed to smack the open tray and jam it open. She tried to close it by forcing it in (never a good move) and now it was very jammed. I replaced her drive with a newer one ($30) and, being of curious mind and never having opened one of these up, I decided to see what’s inside and if I could salvage it.

Since CD ROMs and burners are pretty standard stuff, what I went through should be pretty much what you’ll find with any drive.

First thing you do is pop off the faceplate. Then, on the bottom of the drive are six screws – remove them and the cover comes off: 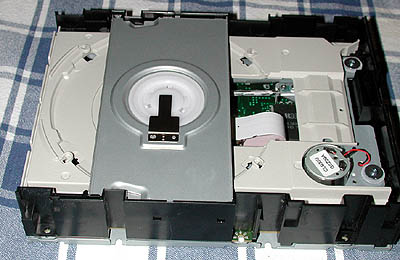 This exposes the top of the drive; flip it over, remove the bottom plate and you’ll see the PCB: 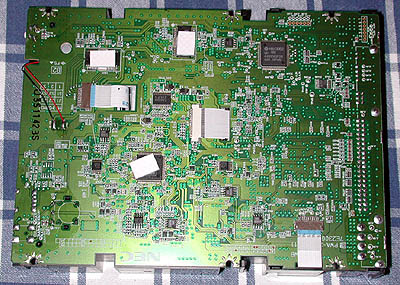 On this unit, the only thing holding the PCB in place to the plastic case are two tabs on each side:

If you push the tabs, the PCB will be free of the plastic case – almost! There are three ribbon cables which go through holes in the PCB to components under the PCB. To free up the PCB, you have to remove these cables from their connectors. I found two kinds:

The largest one slips into a connector that features a movable clip – this is what it looks like with the clip closed: 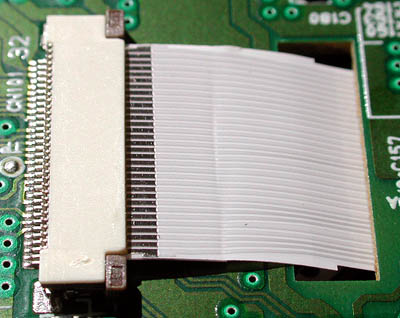 Grasp the small brown ends of the clip and pull it away from the connector: 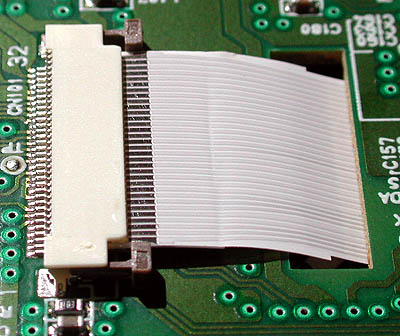 Now lightly grasp the cable and pull it out of the connector: 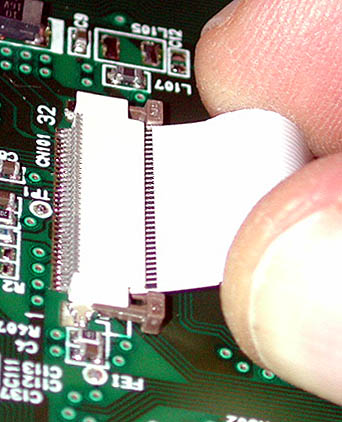 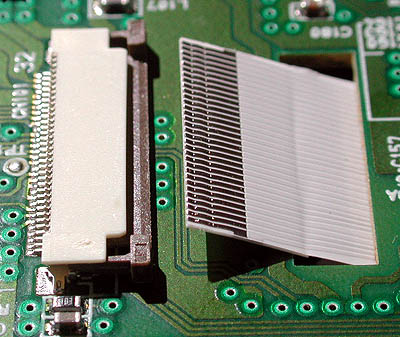 There were two other smaller ribbon connectors – these had a stiff plastic tab on the ribbon:

Firmly grasp the plastic tab and pull it out of the connector: 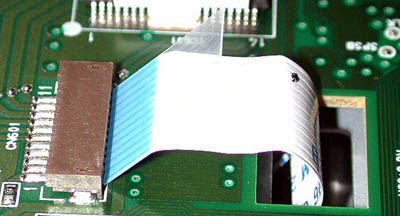 With these three ribbons free, the PCB is ALMOST free – the last thing holding the PCB to the rest of the assembly is two power wires: 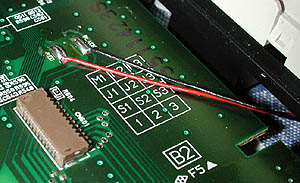 I had no need to fully remove the PCB from the base assembly, so if you’re careful, you can rotate the PCB off the case, exposing the innards like so:

Now I could see the problem: One plastic rail had been bumped of its track and this was the jam. To get at it, I needed to flip the drive over on its back, being careful with the PCB so as not to pull the wires out:

In order to get a clear shot at the rails, I removed this strap: 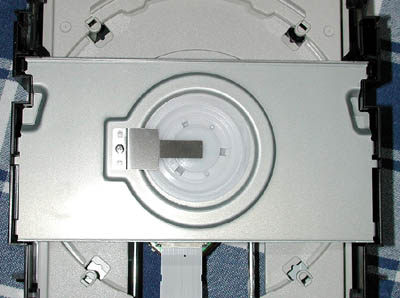 It’s held in place by two metal tabs that fit into the plastic case: 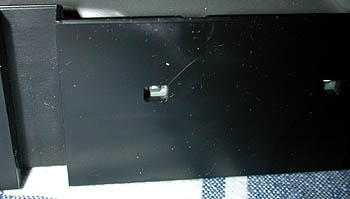 By pushing against the plastic case, the tabs pop out of their holes and the strap comes off:

The bottom pic is before and the top after.

Once the strap is off, the bottom of the drive is bared: 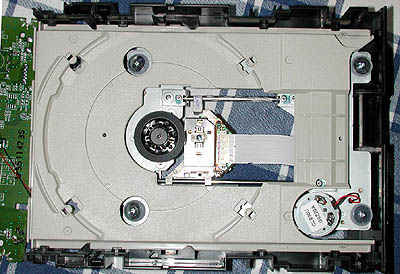 With a little delicate but firm muscling, I got the tray back into its track:

With that fixed, now reverse the process and re-assemble the drive. I found the best way to get the two smaller ribbon cables into place was to push against the firm plastic tab, which pushed it back into place: 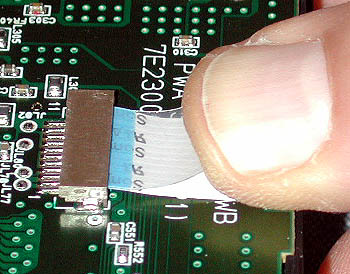 So, with a modicum of effort, the drive was resurrected. I would only attempt this with a simple mechanical problem, such as a jammed tray. The mechanics, although simple, are still quite precise for something like locating the read head, so I doubt that the “average” person with some mechanical skills could readily fix anything more than a jammed tray.

With burners in the $30 range, anything beyond a mechanical problem is simply not worth the effort.

Hope this helps someone with a jammed drive!

I took a look at the database, and noticed that a few of the voltages were . . . very high. The absolute maximum rated voltage of the Coppermines/ Celerons, per Intel’s datasheets is 2.13V. By 2.13V, we are not

How ANYONE Can Replace Leaking Capacitors