And that about says it. By sheer luck, we got to play with an engineering sample of the about to be released Celeron FCPGA 533 MHz CPU. It is sweet. This baby runs at 1.5 volts because it is a 66 MHz part. We found that to run it stable at 100 MHz, you have to increase the voltage to at least 1.65 volts – coincidentally (?) the same voltage for the PIII 600E running at 800 MHz. Note closely the multiplier – 8x.

The pics below show something interesting: 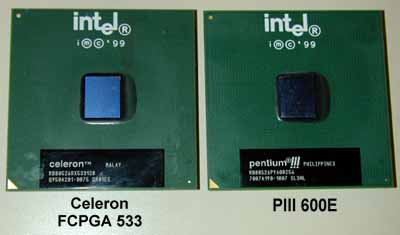 Not much news here – except for the labeling, it looks like a PIII. 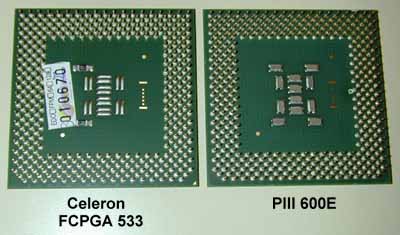 Hello! What have we here? Look closely at the back – there’s some missing parts! It would appear that the circumcision takes place after birth, not during. The pic below clearly shows “the scene of the crime”: 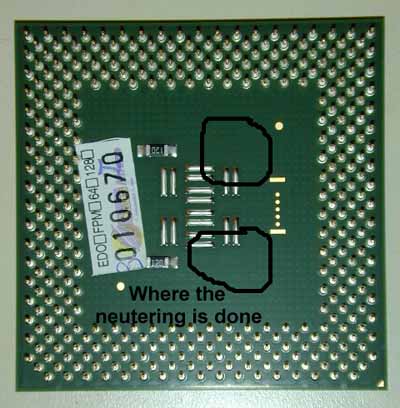 Pure speculation on my part, but if I were Intel and I make all my chips exactly the same (as they have done in the past), then making Celerons out of PIIIs happens on the flip chip circuitry, NOT on the die. The so-what is this is truly a PIII with half its cache disabled…the same PIIIs that overclock so well.

In our testing, the Celeron performs pretty much like a PIII except for lower scores for CPU Mark – a clear indication of the half-cache penalty. However, SI-Sandra benches were almost indistinguishable from a PIII running at 800 MHz. The following table outlines what we found:

The half-cache penalty shows clearly in CPU Mark32 results on the SOYO+IV, both chips running at 800 MHz:

These test used an ALPHA PEP66 for cooling – the Celeron ran at about 100F under stress, so cooling is going to be extremely important in achieving stability at 800MHz and beyond.

Engineering samples are not production run CPUs, but they are not off the mark either. Everything we know to date indicates that the Celeron FCPGAs are going to breathe a new life into the zillions of BX boards that are ripe for CPU Upgrades. However, the high multipliers on these Celerons (533MHz = 8x) could mean that the Celeron FCPGA 533 is the “chip of choice”. In addition, super-cooling a C533 may push this chip into the 900s. This is going to be fun!

I’ve been poring over the article found at Anandtech and it has been truly frustrating. This is what they said: They found connectors on an AZ11 which could be used to change multipliers They soldered pins to it They found

SUMMARY: The correlation between in-socket thermistors and CPU case temps is tenuous at best and misleading at worst. I routinely get emails from readers saying something like “But my Motherboard Monitor temps are different from your heatsink test results.” We,

SUMMARY: This CPU does about what other PIII 800s do on the high side – with aggressive cooling, I don’t doubt that 1100+ is achievable. The good folks at Nata Computers sent us a retail PIII 800E to test out.