High above the Las Vegas Strip in a decked-out suite at the upscale Wynn Hotel, Jacob Freeman gave us a look at the latest products from EVGA. According to Freeman, EVGA prides themselves on offering unique products for enthusiasts. Their goal is to produce hardware focused on the needs of overclockers and high-end users.

The showcase included EVGA’s latest line of X79 motherboards, including the FTW, SLI, Classified and dual-CPU SRX. At the moment these boards are somewhat hard to come by, but EVGA assured us e-tailers would have increased stock beginning in February. The boards features EVGA’s typical gambit of overclocking features. One of the coolest parts (pun intended) was the X79 FTW outfitted with waterblocks on the VRMs and chipset. Typically this would seem like overkill, but Freeman noted that these components tend to heat up quite a bit on X79 and have benefited from additional cooling based on EVGA’s internal testing. We also caught a quick glimpse of EVBOT, an external hardware monitoring and overclocking tool. It will be pretty convenient to be able to monitor temperatures during benchmarking on an external source. It will likely not work for sub-zero, so don’t throw away your thermometer just yet.

Next we took a look at some of the latest video card offerings, including the GTX 580 Classified, which already received a rave review from Overclockers.com. One additional accessory which was not included in our article was the EVGA-designed, Swiftech-manufactured waterblock add-on. This waterblock could be very beneficial when pushing the power-hungry, pre-overclocked GTX 580 Classified. 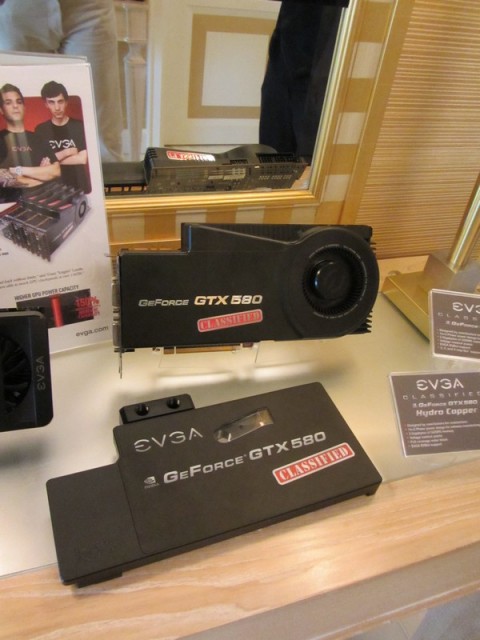 The GTX 560Ti 2Win is another very unique EVGA offering we were able to learn more about. This card features two GTX 560Ti GPUs on a single-PCB, which as far as we know, is the first and only of its kind. Freeman claims the card can put out near HD 7970 performance with a lower MSRP of just $525. The GTX 560Ti 2Win only features 1 GB of RAM per GPU (2 GB total), so at extremely high resolutions it will lose out to 3 GB cards like the GTX 580 or HD 7970. Still, we are very interested to see what it can do and look to perhaps test this card out sometime in the near future. This is definitely a true example of EVGA’s brand promise to innovate and offer the most unique products out there. 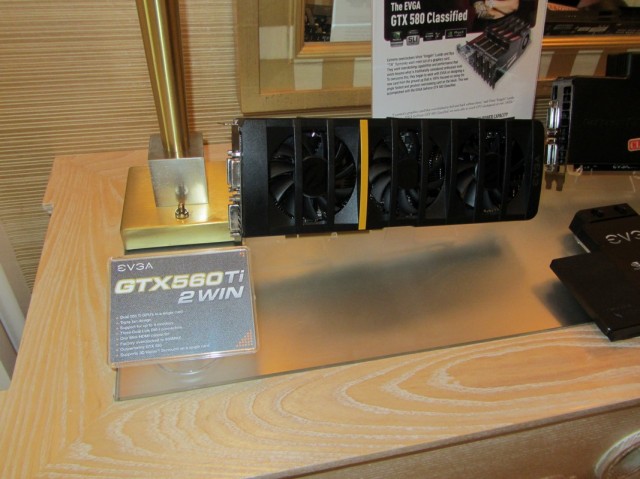 Last, but certainly not least, EVGA unveiled their newest line of PSUs. This is something completely brand new to EVGA. We got to take a look at three Gold-rated PSUs, including a 600 W, 1000 W and a monster 1500 W PSU. The 1500 W fully modular power supply will feature unique 12 V rail customization, DIP switches which allow for special settings including an “Overclocking Mode” and USB connection to monitor loads. The unit is also built on a 6-layer PCB, while most others are four, which should lead to better handling of high load. There is also a “dummy mode,” which allows the user to power on the unit without being plugged into a motherboard (or jumping it). This could be a valuable option for benchers who run multiple PSUs simultaneously.

Overall, our meeting with EVGA was really informative. Thanks to Jacob Freeman for giving us an in-depth tour of EVGA’s latest product offerings.

For continued coverage of CES, please follow our live blog.