During our visit with the folks from ADATA, we were introduced to several new storage and memory products promising even faster speeds than before. ADATA appears to be targeting the gamer, overclocker, and PC enthusiast. They were eager to show us what they’ve been up to.

ADATA’s XPG Z1 DDR4 memory will begin to see speed increases as high as 3465 MHz in the coming months, which they claim will be the world’s fastest. Large capacity kits will see speeds up to 3200 MHz as well. ADATA claims it’s the only memory manufacturer able to provide a steady stream of high capacity/high speed DDR4 modules to meet the ever increasing demand. 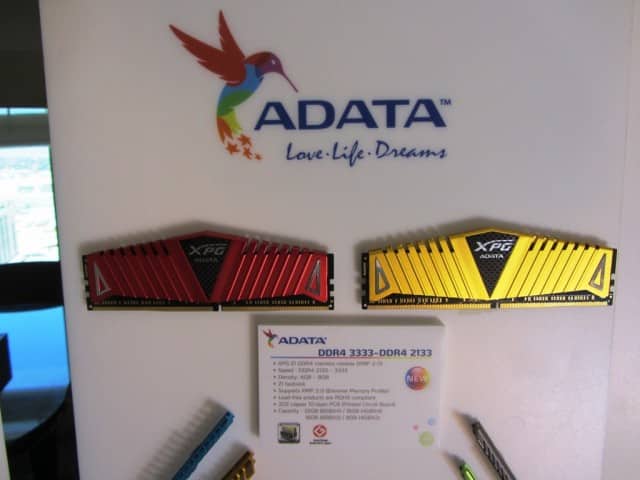 Also on display was ADATA’s full line of SSD storage solutions. One item of particular note here is the industrial M.2 and 2.5″ SSDs that offer power loss protection (PLP), which helps to protect against data loss due to power failure or improper shutdowns. The big hitter on the consumer SSD side is ADATA’s SP320 series. Using the SMI SM2256 controller, these SSDs are capable of read/write performance up to 560/510 MB/s. The SP320 SSDs will be available in capacities ranging from 120 GB to 960 GB.

External storage devices featuring the new USB 3.1 standard were also on display. USB 3.1 has the potential for 10 GB/s transfer rates, which is a significant jump from today’s USB 3.0 interface. One item we looked at was ADATA’s SE700, which packs two SSDs in a Raid 0 configuration and is capable of read/write speeds of 819/839 MB/s. The SE700 uses a USB 3.1 interface and Type C connectors.

ADATA has long been known for providing a variety of USB thumb drives and SD cards, and they had a full display of some of their more popular items. A host of different capacity sizes are available in a wide range of interfaces.

You certainly can’t accuse ADATA of sitting still as far as SSD offerings go. They’ve released a number of different SSDs over the past year featuring different NAND controllers, read/write speeds, and price points. They seemingly have something for everyone in this regard. Today’s review is on their latest Premier SP550 offering, which is aimed at users looking for an affordable upgrade without having to sacrifice performance. The SP550 is ADATA’s first foray into Silicon Motion’s SM2256 NAND controller and its NANDXtend technology. Let’s go find out how well the SP550 240 GB SSD performs and if it’s worth your hard earned dollar.

ADATA has just announced the Prospector 970 and 950 SSD’s with a focus on the high endurance demands of CHIA plotting. The Prospector 970 features 2TB of storage space with a Total Bytes Written (TBW) of 56,000 and has an MSRP of $1499.99. The Prospector 950 has a 1TB capacity and a TBW of 28,000 with an MSRP of $799.99. Both models are designed for continuous use and have a high Program-Erase (P/E) cycle rating. Below is ADATA’s official press release.