Today at CES 2017, here in Las Vegas, we had the pleasure to stop by and talk with AMD. Stay tuned for some details regarding both Ryzen CPU’s and Vega GPU’s.

A few quick details we’ve been fortunate enough to learn about Ryzen. At launch there will be at least 50 motherboards available with a variety of chipsets. The highest chipset is the X370. It will be the only chipset supporting SLI and CrossFire X. For Ryzen, every CPU SKU will be unlocked but only only three chipsets will we be able to overclock. This is to limit issues with overclocking we saw on FX. There will also be a chipset, recently announced, targeted toward SFF motherboard. Expect to see mITX for Ryzen.

The AM4 platform has been designed to support both the Ryzen CPU and the upcoming next-gen APU. This is why you see display outputs on these motherboards. The top Ryzen CPU will be an 8 core and 16 thread processor with a minimum clockspeed of 3.4 GHz. AMD has not settled on a final clockspeed at this point. The chipset has been designed to work very closely with the CPU itself, reducing traces and computational delays.

AMD has been working with 15 of the top cooler manufacturers to have adequate cooling options available for the enthusiast market at launch day. Their target is to stay on the AM4 socket through a minimum of year 2020 for people to be able to maximize their dollar.

Ryzen will integrate AMD’s new Sense MI intellectual property. It was designed with Ryzen at the forefront. This technology does multiple things, but namely it allows constant adjustment of clockspeed and voltage to reduce drops (25MHz increments vs. 100MHz increments). The boost speed can go beyond the rated boost if there is enough power and cooling available to do so, this is accomplished through many low-level sensors built in to the CPU. This should be a BIOS option to enable/disable, but not explicitly stated as such by AMD. They will have more than one part at launch, although they aren’t quite sure which it will be. They will definitely launch with the flagship CPU though. This launch will take place in the first quarter, most likely late-February.

We were fortunate enough to get to demo a Ryzen-based system today, namely an 8-core 16-thread 3.4 GHz system with 4MB L2 Cache and 16MB L3 Cache. It was set up for gaming at 4K Ultra with a Titan X Pascal. Directly beside this system was an Intel i7-6900K, it was also using a Titan X Pascal. Through direct usage of both systems directly beside each other there was no discernible difference in feel of gameplay, logging of framerates, or any other visual/perceptible queues.

There was also a Ryzen and Vega demo system set up on the other end of the hall with DOOM running at 4K 60Hz. The gameplay was incredibly smooth, I can’t wait to hear more about the Vega GPU from AMD.

Here’s the SenseUI features built in to the Ryzen CPU’s: 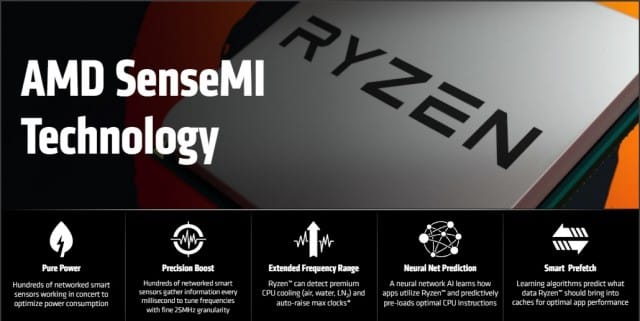 In addition to everything above, AMD had 16 motherboards on display from some of their partners. The manufacturers of the boards in question below are in the captions.

If you would like to discuss what we saw further, both Earthdog and myself will be monitoring the Zen Rumors thread heavily. We can also field questions in this thread.

In our next meeting at CES 2016, we swung by AMD’s ballroom and had a chance to meet with Robert Hallack, the Head of Global Technical Marketing for AMD. In this meeting, he discussed a myriad of topics ranging from AMD’s new GPU architecture, named Polaris, to the new HDR technology.

While the Radeon HD 5550 may not be a new card, the inclusion of GDDR5 is. This should add a small boost in performance over the GDDR3 and DDR2 models while retaining the low-power profile, perfect for inclusion in a Home Theater PC (HTPC) build.