Shooting on over to a suite at the Bellagio, we found our friends at EVGA. They had several new items to discuss including the new DG-7 case, ICX cooler for the 1060/1070/1080, their updated power supply line (B3/G3 so far), and new, expandable AIO lineup.

You may remember the full tower DG-8 from the past, this is a mid-tower version. It carries over many of the same features except in mid-tower form. Obviously we are losing the fancy display and monitoring at the bottom. But we do see a nicely smoked tempered glass side panel. Pricing is said to be $99-$129, but is not yet finalized. You can expect to see the case around June. 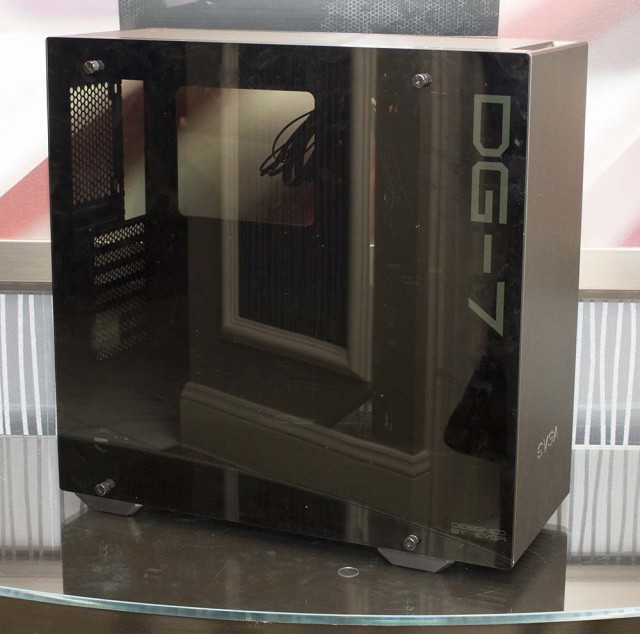 Next up is a beast of a laptop in the EVGA SC-15. We covered the power house SC-17 last year, but this time they have downsized a bit going with a 15″ monitor. The monitor is 1080p resolution, 120 Hz and has G-Sync. The GPU driving the panel is a mobile GTX 1060. The processor inside is a Kaby Lake 7700HQ, this laptop had 16GB of RAM, a 256GB SSD, as well as a 1TB HDD. Overclocking can be done on the GPU, but not the CPU this time around (reserved for the flagship i7-7820HK). No idea on pricing yet, but we can expect to see this in June. 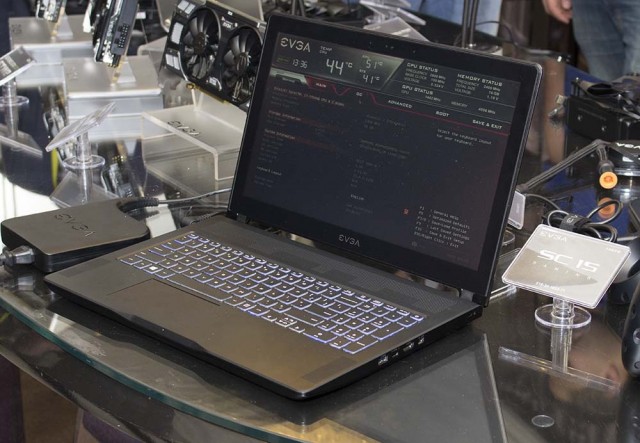 Next, EVGA has updated their ACX cooler to one now called ICX. They couldn’t share many details on the cooling, but its clear we are seeing a new backplate, and not pictured, are some changes to the heatsink design. Also kept hush hush are some proprietary design elements on the board. Once patented, some details should be released. We should start to see the updated GTX 1070 and 1080 sporting the ICX cooler in a few weeks as well as more details on the new goodies they have added. We can also expect a review as well!

Below we have pictured the Z270 lineup. From top to bottom you have the Z270 Classified K, Z270 FTW K, and Z270 Stinger. The Stinger adds some new features like the built in Wifi, a M.2 PCIe 4x slot (hiding on the back of the board), and now even a U.2 slot so it is more fully featured compared with the last generation Stinger we reviewed.

One feature I thought was really cool, EVGA has decided to stencil right on the board, what will happen to SATA and PCIe slots when using the various M.2 drives. I don’t recall seeing that in the past on any other board and should help minimize the confusion many have when using these slots. Pricing on the boards will come in at $199, $249, and $299 for the Stinger, FTW K, and Classified K respectively. They have undercut pricing from last year to be more competitive in the market. We should see these boards in February as well as reviews on the front page.

Stenciling on the motherboard shows PCIe/SATA breakdowns when using M.2/U.2

Next up is a shot of EVGA’s new power supplies. Most that frequent our forums know we love to recommend these PSUs as they are truly top quality, but are priced well compared to similar quality units. EVGA continues to use Superflower as the OEM so the quality should absolutely still be there. On the left side of the photo are the B3 (80-Plus Bronze) power supplies. One thing to note on the current flaghsip G3, it is the smallest 1KW PSU on the market coming in at 150mm. All of these power supplies you are able to swap out all the modular cables with other units. We are talking about any cables that work in G2/B2 to G3/B3. Your mileage may vary if you are swapping out an EVGA unit for another brand.

Last but not least EVGA has dove head first into watercooling, offering up a few different coolers ranging from 120mm all the way up to 360mm. All of the kits allow you to easily expand the system due to the use of the quick disconnects (QDCs). If you look closely at the chassis design of the fan, you will see that there is a little dip on each side of the frame. This was said to help keep noise down via minimizing the turbulence of the incoming air. And to be frank, I think it looks pretty cool too! These should be hitting the market sometime in March.

Keep looking at the front page in the coming weeks and months for reviews on some of these products!