As our last stop of the day Tuesday, we swung by and visited with ASUS where it felt like they rented out an entire hotel floor. Multiple suites filled with all of the tech goodies they have to offer from phones to desktops, and peripherals in between. We’ll focus on the things more geared towards computing and first and foremost, the ROG Matrix 2080Ti.

The feature which sets this card apart from the rest is the hybrid cooling solution named Infinity Loop which keeps the card cool. The card integrates a complete liquid cooling solution all within a 3-slot width. That means a pump, radiator, tubing, cold plate, and three fans are all housed inside the card. In other words, there is no external radiator to mount to keep the card cool… incredibly impressive.

Many of us remember the ROG Matrix of old, offering users a VRM fit for sub-ambient overclocking and a slew of features meant to increase overclocking potential. In this version of the Matrix, it shares the power delivery bits with the ROG Strix which purists may find disappointing. With the Turing architecture under the hood on this version, they have the most powerful ROG Matrix video card ever.  Out of the box, the GPU is overclocked to 1815 MHz (from the FE 1635 MHz). Memory speeds are also upped a bit to 1850 MHz (from 1750). These clocks speeds should make it one of the highest performing 2080 Ti’s on the market.

There is no word on pricing yet, but you can bet this unicorn of a graphics card will fetch a hefty premium due to the integration of the water cooler as well as the binning to reach those clocks. We should see these become available towards the end of this month.

Next up is an impressive piece of machinery in the ROG Mothership. This desktop replacement (DTR) laptop has the look of a Surface Pro that used HGH in the offseason. The built for gaming DTR laptop includes a flip-out kickstand to support the 17.3″ 1080p 144 Hz panel as well as house the hardware and impressive cooling solution. The detachable keyboard works through 2.4 GHz Wi-Fi or can be connected via USB-C. Additionally, each key is also individually backlit for that RGB flare.

Inside, it uses a core i9-8950HK with all cores set to 4.8 GHz out of the box. The GPU portion is a full-fledged RTX 2080 while memory capacity is up to 64GB of DDR4-2666. Continuing on with the theme of overkill, the Mothership uses three 512 GB M.2 NVMe PCIe SSDs in RAID0. But this isn’t your ordinary RAID0 either. ASUS says this setup uses x8 lanes from the CPU splits them into two x4 lanes and uses x4 lanes from the chipset to make a smoking fast RAID0 setup reaching speeds of 8700 MB/s.

A price was not mentioned, but we can expect this to cost more than the previous DTR. Availability is said to be sometime in 1Q.

ASUS had all of its new ROG gaming monitors on display in the suite with the XG432Q being the first we saw. The XG432Q is a 43″ 4K UHD gaming monitor sporting a 120 MHz refresh rate, supports AMD Freesync 2 HDR technology, and is HDR 600 compliant. 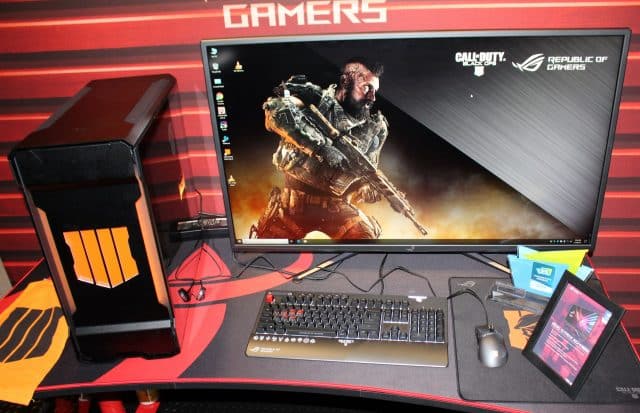 Pricing wasn’t mentioned and we should see the XG438Q in the spring, the XG49VQ, and the XG32VQR this month.

ASUS also shared with the world their new Zephyrus S gaming laptop stamping it as the world’s slimmest gaming laptop at 15mm. The Zephyrus S uses an Intel 8th gen Intel Core i7-8750H processor with up to 24 GB of RAM, up to an NVIDIA GeForce RTX 2080 (Max-Q) graphics card, and a 17.3″ 1080p 144Hz 3ms Pantone Validated G-sync monitor.

The keyboard is backlit by with customizable LEDs. An updated cooling system puts heat pipes and a new heatsink system designed to prevent dust from getting stuck in the cooling system with an anti-dust channel built in the fan. It works by centrifugal force sending a lot of the heavier dust particles to the outside and that channel, instead of in the heatsink.

The laptop (and its GX531 sibling) will be available in the first quarter. Information about pricing was not released.

Last, but certainly not least is a no holds barred, I don’t care about following rules and price be damned motherboard designed for Intel’s monster 28 core 56 thread Skylake-X CPU (Xeon W-3175X). The board features a mindboggling 32-phase VRM, four 8-pin, two 6-pin, and two 24-pin power inputs to feed the beastly processor. On the networking side, the board includes an Aquantia AQC-107 10 Gbps networking port along with Intel I219-LM LAN, and Intel AC-9260ac Wi-Fi. 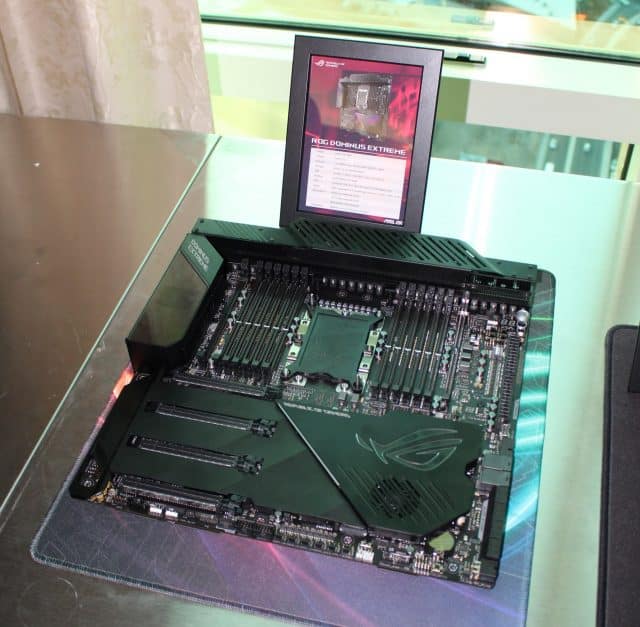 The 14″ x 14″ Super ETX size board has 12 DDR4 DIMM slots capable of supporting up to 192 GB of RAM. The large board has room for dual DIMM2 slots able to support four M.2 drives. It also has two U.2 ports to complement its contingent of eight SATA3 ports. The beefy VRM is cooled by four 40mm fans which only turn on when necessary. The large IO cover contains a 1.77″ LiveDash OLED as well as a full aluminum cover and backplate armor with integrated RGB LEDs.

ASUS says the board will be available this year, but no mention on pricing from reliable sources. However, the internet has this pegged around $1500.

The Crosshair IV Formula is ASUS’ top of the line AMD motherboard. Housing the 890FX northbridge and SB850 southbridge, it should be a current-generation powerhouse. So sit back, relax and let’s sink our teeth into this beast.

Gigabyte has recently announced the Aorus 4k Gaming Monitor that’s console ready. While the press release is geared towards console gamers, there is no reason PC enthusiasts can’t take advantage of a great display. The Gigabyte 4K ranges from 32″ up to 48″ and features up to 144Hz refresh rate and 0.5ms response time, they also take full advantage of the HDMI 2.1 connector’s bandwidth. Pricing and availability are not yet known, though they claim it is currently available. For more information please read Gigabyte’s press release below.

Both ASUS and G.Skill put up an impressive showing at Computex this year. We check out some of the highlights!