Continuing CES 2019 coverage on day three (our last full day), we ran into our friends at EVGA who had some pretty cool things to show off. First, we saw their flagship RTX 2080 Ti K|ngP|n card which uses a hybrid CLC cooling solution, the impressive Z390 Dark motherboard adorned with gold plating and a 90° socket orientation, and finally, their first dip into sound cards with a high-end Nu Audio add-in-card.

The long-awaited flagship video card from EVGA has finally arrived – no more teasers! The card sports a Hybrid cooler similar to the GTX 1080 Ti to help keep the Turing GPU cool. Pictured is a 120mm radiator which EVGA says already does a more than adequate job (said it holds around 55 °C in some of their testing), but this will be replaced by a 240mm radiator which should work even better. A 100mm fan on the card works with the CLC for additional cooling on the memory and VRMs. On top of this shroud is an OLED display which cycles through vital information on the card such as temperature, voltage, and more. 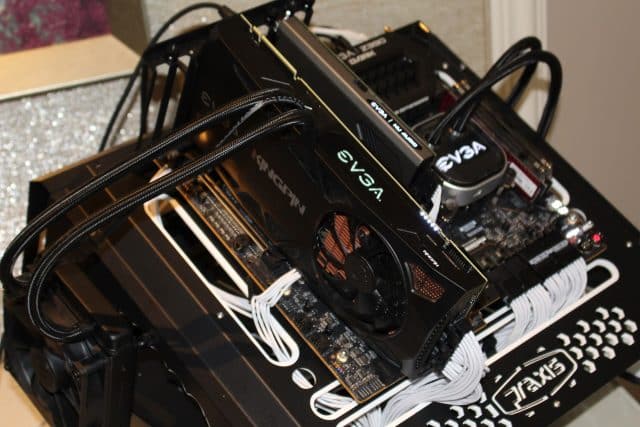 The GPU is fed power through three 8-pin PCIe connectors and feeds into a 19-phase VRM. EVGA stated the power delivery will support 550W. For the extreme overclocker, there is a three position BIOS switch which includes an LN2 mode with raised power limits. To help the extreme overclocker, there are also diagnostic LEDs, as well as voltage read points and a PROBEIT connection as well.

Pricing was not mentioned and EVGA says we should see the card in mid to late February.

The Z390 Dark also made an appearance showing off its unique board shape and black and gold color. The Dark is made with the overclocker in mind as it is built with a robust power delivery system (12-phase) and two DRAM slots for improved stability and RAM overclocking ability. 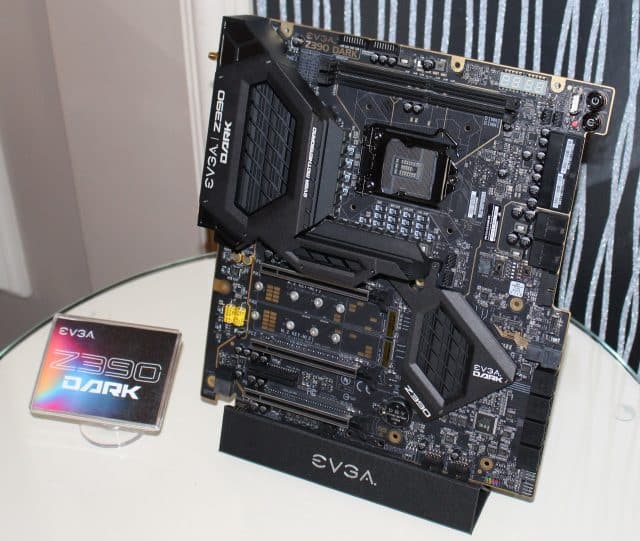 The feature which sets the board apart the most in this motherboard design is the socket being turned 90° counterclockwise. The power delivery bits also had the same change and can be found on the left side and below the socket above the PCIe slot. Additionally, the CPU 8-pin power leads are now found on the side of the board next to the 24-pin ATX power lead. The motherboard is also notched in this area for easier wiring.

The board has eight SATA3 ports, a single U.2 port, as well as two M.2 connections. If you look between the first and second PCIe slot, there are gold pads under where the M.2 sits whose purpose is to help cool the module above via an included thermal pad – the heat is actually absorbed by the board to aid with cooling these fast NVMe based drives.

The EVGA Z390 Dark is available now for $499 on EVGA’s store, but not yet available on Newegg or Amazon.

EVGA’s first dive into the sound arena was a headfirst plunge recruiting the knowledge and expertise of a UK based corporation named Audio Note to engineer and produce. The card itself has an aluminum shroud covering the full height PCB and all the hand-picked internals. The outside of the card also has the VGA logo and NU Audio in RGB LED. Ports include RCA, 6.3 mm jack, 3.5 mm line in/out, and TOSLink. 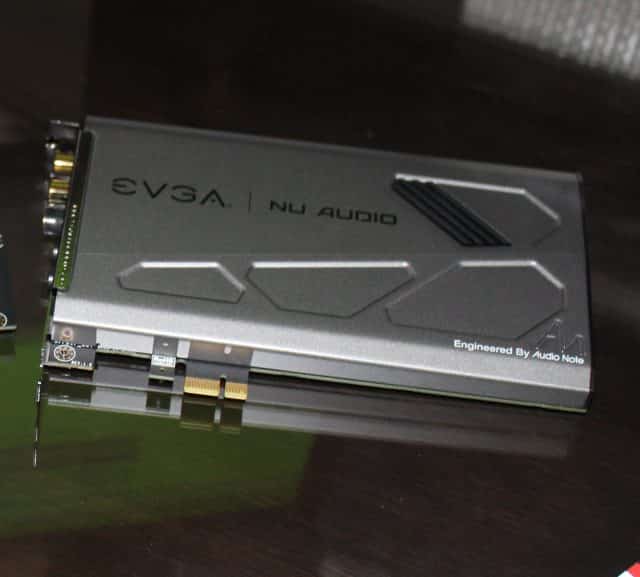 All the parts were hand-selected in order to deliver superior audio over onboard as well as other discrete solutions. The Nu Audio sound card uses an XMOS xCore-200 DSP for audio processing while a high-performance DAC makes the signal useable for the other hardware. The DAC has 123db DNR and supports audio up to 384 KHz. There are also two Texas Instruments TI LME49724 differential amplifiers that are said to reduce distortion.  Power is sourced from a SATA power connector as opposed to the PCIe lanes as it a more stable power. 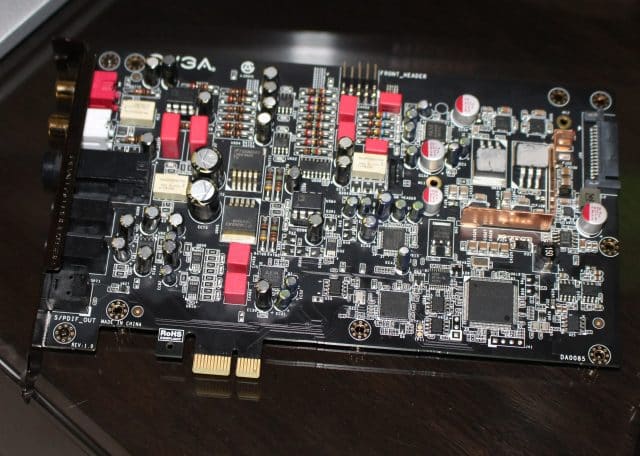 The card is supposed to be released on January 16th with a price point of $249.

I was pretty surprised when I received the info that EVGA is offering a DDR4 memory kit for review. Somehow I missed the fact that EVGA had entered the DRAM market some time ago and has already presented DDR3 and

Today we have a chance to look at the newly released Z77 based board from EVGA, the Z77 FTW….The FTW models are usually a nice blend of high end features with pricing falling in between the venerable Classified and SLI versions of the board. Let’s see if that still holds true.

In another one of our many stops today for our CES 2016 coverage, we visited our friends at EVGA. They had some pretty cool things to show off. EVGA has steadily expanded their product lineup over the last couple of years moving into peripherals, power supplies, and even their own memory. That trend continues this year with them expanding into the full tower case market, gaming laptops, AIO watercooling, and even a discrete sound card! Read on for more details of that and other twists on existing products!