In our first day of travels at CES 2019, we met with our friends at GIGABYTE who had a lot to share. A couple of months back, they showed off the Z390 AORUS Extreme which was an incredibly feature-laden board with a robust VRM. Today they showed the Z390 AORUS Extreme Waterforce which adds a water block and cools the CPU, VRM, and chipset taking an already over the top motherboard and making it even cooler… in this case, literally.

Additionally, they announced a RGB AIC SSD along with a M.2 variant.  The AIC version comes in 256GB, 512GB, and 1TB with speeds rated at 3480 MB/s reads and 3080 MB/s writes making it one of the faster available in the market. Speed isn’t the only change with the new SSD, AORUS has also adorned it with an aluminum heatsink (makes contact with flash memory via thermal pad) and frosted RGB LEDs surrounding it taking the aesthetic to the next level. The RGB LED implementation is controlled via RGB Fusion software. 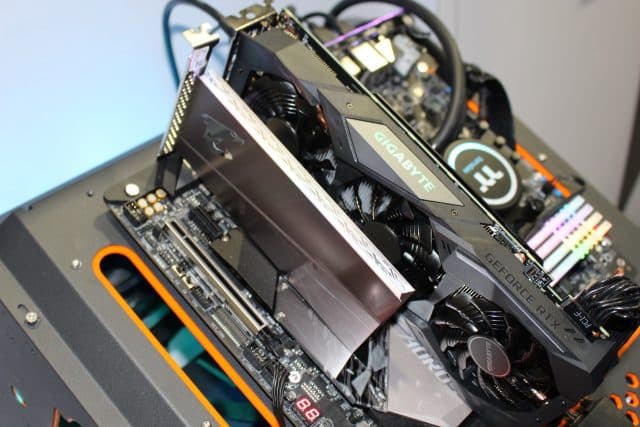 The AORUS team has also come out with their first monitor, a 27″ 2560×1440 10-bit IPS 144 Hz panel which they say covers 95% of the DCI-P3 color space. The monitor includes a sturdy metal stand with a handle on top for easy transport. It also has height adjustment and swivel functionality, as well as RGB LED accent lighting on the back. It also supports Freesync frame syncing technology (and who knows, perhaps an NVIDIA G-Sync compatible rating as well).

Other cool features are its ability to support OSD settings for a slew of items such as an aiming reticle, frame rate monitoring, color adjustments, and even a feature called Advanced Noise Cancellation (ANC) which improves audio by minimizing ambient noise. This is accomplished with a microphone integrated into the monitor itself.

There is also an aim assist feature on the monitor which does just as the name implies, assists with aiming. To see this in action was really a sight. For example, in a first-person shooter, typically when firing a weapon there is a ‘kick’ to it which changes the aim point. With aim assist enabled, this reduces the amount of travel away from the initial aim point. The cool thing about this (and the reticle) is that it is baked into the firmware and doesn’t get recognized by anti-cheat software as it isn’t using CPU cycles for its functionality. The monitor will be available January 18th with a $599 price tag. 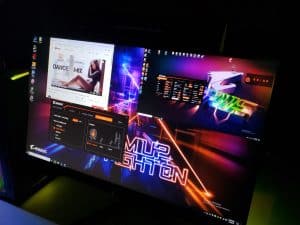 We also caught a glimpse of their RTX 2060 lineup consisting of (for the US) a mini-ITX size version, a Windforce cooling adorned card with three fans and a larger heatsink, as well as the extreme version which will use the heatsink aesthetic from the 10 series GPUs.

As the days go by in the SSD world, we have seen a lot of changes in the past couple of years, but one of the biggest changes has been the steady declining price of these drives. OCZ has filled out their SSD line-up to include high-end enthusiast SSDs such as their Vertex 150, workstation level drives, Revodrive 3, and down to the performance level of their new OCZ Vertex 460. This drive is meant to compete with the likes of the more budget oriented performance drives on the market. So we’ll put the OCZ Vertex 460 and its new proprietary in-house Barefoot 3 M10 controller through our test suite, and see how things look on the performance front. Let’s get to it! Read More

With the recent launch of Sandy Bridge, we have seen quite a few P67 motherboards hit the market. Gigabyte has not disappointed us with their flagship enthusiast motherboard, the Gigabyte P67A-UD7. Read More

Today we have the Z170X-UD5 which is in the upper tier of GIGABYTE’s current lineup, just behind their Z170X-Gaming 7. Being near the top of the lineup, the UD5 looks like a great board on paper and deserves a good testing. Read More