In one of several appointments we had on day two of CES 2019, your boots on the ground visited with MSI and had a chance to see their latest flagship graphics card in the RTX 2080 Ti Lightning, the new GS75 Stealth gaming laptop, and the PS63 Modern.

MSI didn’t miss a chance to develop one of the more monstrous RTX 2080 Ti’s we’ve seen in their flagship Lightning graphics card. This iteration features a 19 Phase VRM fed from three 8-pin PCIe power connectors. If we do the math, that’s 525W of power able to be delivered to the GPU. There wasn’t a mention of clock speed, however we have seen a GPUz screenshot showing a base clock of 1903 MHz, with memory running at 2055 MHz, if accurate, both are a large improvement over the FE edition as well as most other cards custom cards (except for perhaps the EVGA K|ngP|n). To that end, there are three connectors on the end of the card which are likely for extreme overclocking situations… maybe we can bypass the NVIDIA power limits…???

The heatsink used looks similar to the version on the 1080 Ti with some updates. The card uses three fans, two with RGB LEDs, to keep the beast cool. On top of the card is a customizable OLED display which shows off pertinent information such as voltage, clock speed, temperatures, and GPU use. The RGB aesthetic in the fans carries over to the back of the card as well. The backplate has a carbon fiber appearance.

Pricing was not disclosed, but we can bet it will be pricey and for some, worth it.

Also in the room was the GS75 Stealth laptop. This sleek looking gaming laptop is an upgrade from the previous GS65 Stealth Thin both hardware wise and screen size with a bump to 17″ 1080p 144Hz IPS panel along with ultra-thin bezels. The keyboard uses individually backlit RGB LED keys and able to be customized through their Mystic software. 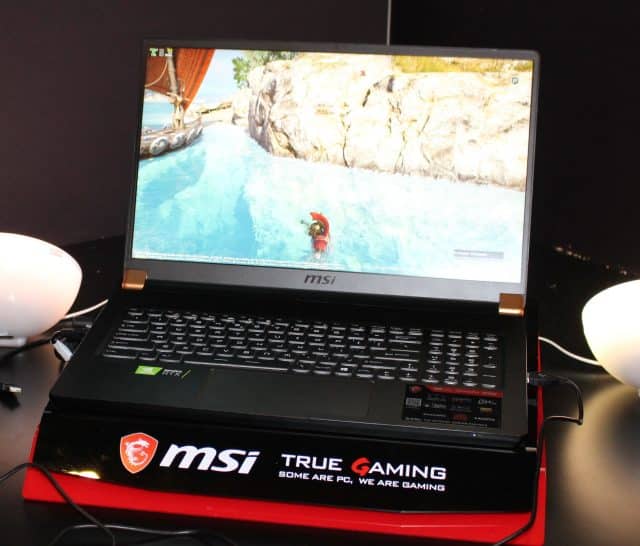 Inside the chassis users will find an 8th Gen Intel Core i7 processor and an NVIDIA GeForce RTX 2080 Max-Q sporting 8 GB of VRAM. Storage options include up to 1TB SSD. The chassis has a whopping three SSD (M.2) card slots which is unfamiliar territory in the laptop this thin (15.6 x 10.2 x 0.7″). Users are also easily able to access that space for easy DIY replacement. The Max-Q version of the RTX 2080 which is the highest varient possible, is said to be the first to market. With that GPU and a 1080p resolution, high frame rate gaming and utilizing the 144 Hz is entirely possible.

Pricing was not shared, nor availability… but it should be soon if its the first to have a Max-Q 2080 under the hood.

On the opposite side of the coin from the gaming laptop above is the PS63 Modern. The PS63 is built for creators and intended to be more of a professional model than a gaming machine. 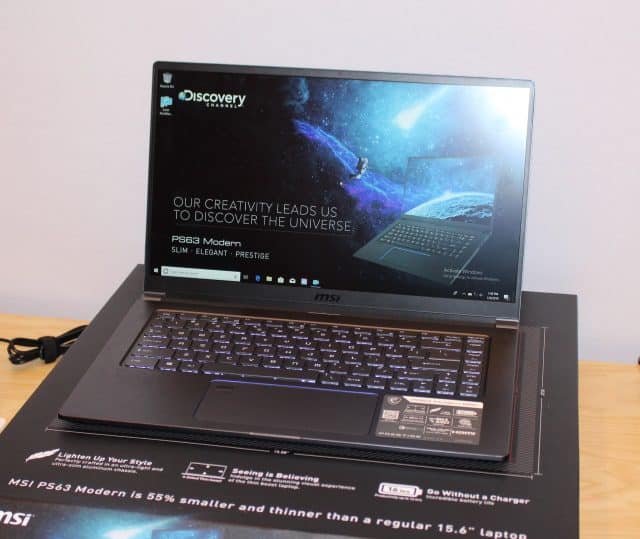 It has an 8th Gen Intel Core i7 processor and up to an NVIDIA GeForce GTX1050 Max-Q for graphics. The GPU will push its pixels to a 15.6″ 1080p display.  The system starts off with 4 GB DDR4 memory with capacity to 32 GB. The battery is rated for a lengthy 16 hours of use on a single charge as well as having a quick charge capability once it is drained. It wasn’t mentioned how this was measured.

The styling is reserved and fit for an office with its dark grey color and matte finish. The only LEDs found on the machine are the white (only) backlit keyboard. MSI also shared with us the touchpad should have improved performance as well which was a pain point in the past.

Pricing and availability were not listed but we expect to see them soon.

It’s that time of year again and CES 2019 is here. Outside of all the AI, Self-driving vehicles, drones, and other knick-knacks, CES is also a place where board/card partners get to show off their new motherboards, GPUs, laptops, monitors, and a whole lot more.

Thanks to MSI I have the X299 Gaming M7 ACK motherboard on the test bench today. At the launch of the 2066 platform there was a bit of controversy over the ability of many of the motherboards to handle the power requirements of the 10+ core i9 series of Intel CPUs.