It’s that time of year again and CES 2019 is here. Outside of all the AI, Self-driving vehicles, drones, and other knick-knacks, CES is also a place where board/card partners get to show off their new motherboards, GPUs, laptops, monitors, and a whole lot more. We here at Overclockers.com have boots on the ground and have nearly 20 meetings with industry leaders including AMD, NVIDIA, ASUS, GIGABYTE, MSI, Kingston, ADATA, Patriot, and more!

Over the next couple of days, we’ll bring you coverage straight from the hotel suites where our partners show showing off their new wares. We will also have additional, and likely more frequent, updates on Facebook which is easily accessed from the link below. Our CES 2019 tag page will also have all of our coverage listed.

On the eve of CES, major industry players had a chance to take the stage and share what they have to offer. NVIDIA, AMD, and Intel shared news today with a new affordable RTX GPU and G-Sync expansion, AMD mobility CPUs, and more information regarding Intel’s foray into the discrete GPU market.

NVIDIA’s announcements today covered several items including advancements and plans in AI, over 40 new laptop models using their new Turing architecture. Turing cards from the RTX 2080 to the just announced RTX 2060 can be found inside these new laptops from major OEMs. The melding of the Max-Q design which shrinks GPUs so they can fit into small form factors, allows these partners to deliver smaller, faster, lighter, and more powerful mobile devices. Look to see these on store shelves around January 29.

NVIDIA CEO Jensen Huang announced the latest Turing GPU in the RTX 2060. The goal of the 2060 is to bring ray tracing capabilities to the masses with notably more affordable starting price of $349. The RTX 2060 comes equipped with 6GB of GDDR6 memory (there is a GDDR5 model), 1920 CUDA Cores, 48 ROPs, and 240 tensor cores. Base and boost clocks are 1365/1680 respectively in a 160W package (Founders Edition).

Performance of the card is said to be in the ballpark of the last generation GTX 1070Ti. Assuming this as fact, users are able to purchase the latest technology at similar price points and performance  which, until now, hasn’t been achieved with Turing (price being the biggest jump). Availability on these cards will start on January 15th. Over the coming days, we will get to see board partner cards from ASUS, MSI, GIGABYTE, and EVGA. We’ll have a review on it soon as the card landed the day we arrived at CES.

The last item of note from the NVIDIA camp is their announcement of additional G-sync models including 4K HDR displays and lower resolution, high hertz models. But this wasn’t the shocker. The big news came from them announcing the expansion of the G-Sync ecosystem to now include hundreds of monitor models available capable of variable refresh rates (VRR) using the VESA DisplayPort Adaptive-Sync protocol. With the VRR gaming experience can vary widely, NVIDIA completed testing on 400 monitors and was able to approve 12 with more on the way. Those that pass the test, the updated driver will enable G-sync by default. Depending on how many monitors are able to pass this test, it could be a large expansion and bring the sweet synced frames of G-Sync to a more affordable price point.

Support for G-Sync compatible monitors will be available on January 15th with the release of the first Game Ready driver of 2019.

Intel, like NVIDIA, announced several items spanning AI to home connectivity, and more. For our crowd, the real news was in the teaser regarding their impending discrete GPUs. Although we love our friends at AMD and NVIDIA for their contributions in this area, more competition in this space can only be helpful, in particular the high-end space. 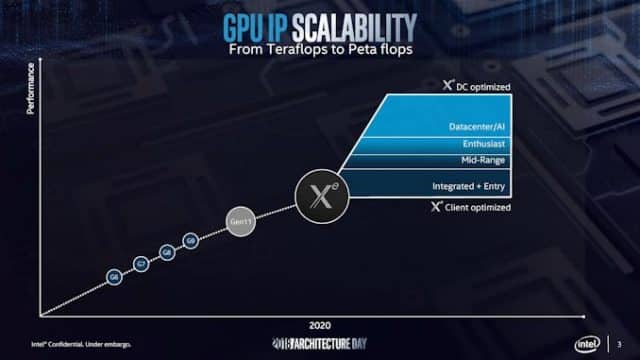 Intel shared a few slides showing off where the iterations of the discrete GPU, dubbed, Xe. Xe will grace us with its presence after the new Gen11 graphics engine noting this will be a transition from the “gen” naming scheme. The new GPU will be able to scale from integrated GPUs, discrete GPUs ranging from mid-range, enthusiast, all the up to data-centers. Intel says they are still on target with a 2020 debut for the Xe-based graphics.

Not to be outdone, AMD dove headfirst into CES announcing new Picasso series APUs, as well as H-series and A-series processors. The new processors are a refresh to the second generation Ryzen 3000 series chips which includes the 3, 5, and 7 series. The H-series chips are slated for mainstream gaming laptops, while the two A-series processors make a surprising visit in the Chromebook market. Chips will range from the AMD Athlon 300U, a 15W, 2c/4t CPU running at 2.4/3.3 GHz base/boost clock to the Ryzen 3750H 35W, 4c/8t CPU which runs at 2.3/4.0 GHz.

Please keep an eye out on the front page and our facebook page for updates at CES throughout the week. Do you have a question for one of the companies we will see, please list it in the comments below and we will see what we can do!

As the whirlwind tour of CES 2019 continues, we are visiting with Enermax. No stranger to cooling and cases, Enermax had plenty of new products on display. Highlights included AIO coolers capable of dissipating up to 500w, new fans and updates to the flagship Saberay case. Read More

The biggest trade show in the world of technology and hardware has already begun. Three Overclockers.com staff members will be in Las Vegas at CES 2012 covering it live. Read More

Once again, I have the pleasure of reviewing a new installment from EVGA’s FTW motherboard series. This time it’s the Z170 FTW getting strapped on to the benching stand. With an all-new look, new features, and support for Skylake CPU’s with DDR4 memory EVGA has had their work cut out for them revamping the FTW. Let’s see what they kept, improved, and dropped on this newest iteration. Read More