The next stop on our CES 2020 tour is with Alphacool who had some new enterprise cooling solutions as well as a lot for us, the general consumer. On that front, we saw the new Phoyba Strike series and Eisbaer Aurora AIO. For the custom water cooler, they showed off the glass Eisbecher Aurora reservoir OLED flow rate display as well as an upgrade to the VPP755 pump.

The Eisbaer Aurora AIO is a high-end AIO using copper radiators that come in 240mm or 260mm sizes. 280mm and 420mm versions are planned for later in the year. The Aurora comes with a new pump said to offer 10% more power while making less noise than the previous version. On the new TPV tubes is a quick release connection that allows the user to expand to other Eisbaer ready products. Like the Phobya, there are addressable RGB lighting on the pump/block as well as the fans. Alphacool says we can expect to see the 280mm and 420mm versions in Q2/Q3 2020 with prices starting around $135. 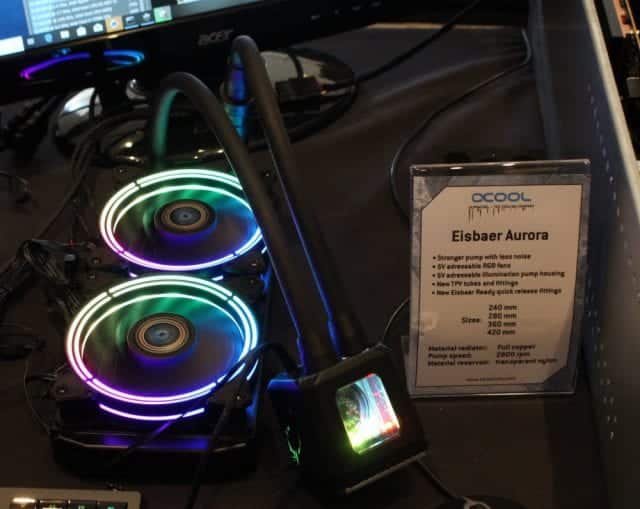 Alphacool also displayed the new Eiszapfen Pro hard tube fittings. They say it is significantly improved over the previous version in part due to the O-ring. Where a normal fitting uses multiple, the Pro version uses a single one with variable thickness. This design presses the O-ring firmly against the hard tube when the union nut is screwed on. These will be on the market sometime Q1 2020.

The last thing we’ll cover is the Eisbecher Aurora reservoir. The new res is made from real glass and integrates digital RGB lighting inside the tube. The Aurora series reservoirs will come in two sizes, 150ml, and 250ml and two versions – one with a pump (D5) and one without. The MSRP is still unknown and they expect availability at the end of Q1 2020. 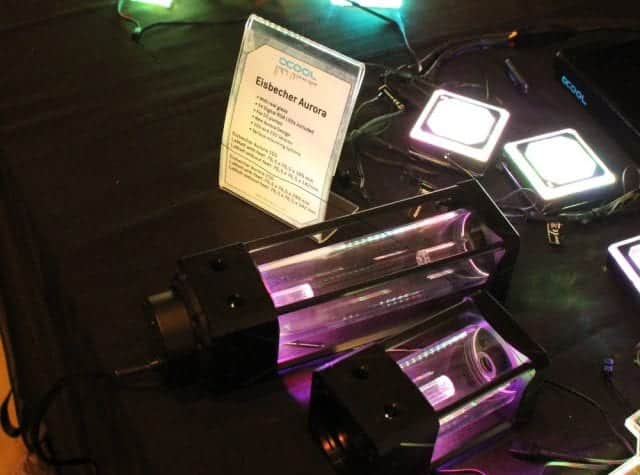 Check out all of our CES 2020 adventures!

During CES earlier this year, EK hinted at a new lineup of products made specifically for professionals. Today, they introduced the EK Professional Line that includes the EK-Pro Manifold and the EK-Pro Quick Disconnect kits. The EK-Pro Manifold features the capability to cool up to 2 CPUs and 4 GPUs, industrial materials, and a no-frills approach by excluding RGB. The EK-Pro Quick Disconnect kits tout an easy installation to transform an existing water block into a powerful machine. There is definitely more to come from this lineup, including workstation GPU waterblocks.

The next stop on our CES 2020 tour is with Alphacool who had some new enterprise cooling solutions as well as a lot for us, the general consumer.