CES 2020 appears to be the year of the gaming display. For our interests displays have been at the forefront of many of the demos we have attended and ASUS was no exception. There are a couple of interesting new additions to their ROG display lineup notably the ROG Swift 360 Hz panel and the ROG Swift PG32UQX. We also saw some extreme prebuilt desktops, case innovations, and an SFF (small form factor) RTX 2070 designed with the new Intel NUC in mind.

It’s always nice to see innovation in case design and functionality. The ROG Z11 is a great example of thinking outside of the box. The motherboard can be installed in your typical orientation or rotated 90° counterclockwise which places the motherboard rear I/O at the top of the case. ASUS has also used an 11° offset on the motherboard tray which aids in cooling but also allows extra room behind the motherboard for cable management. They have included USB 3.2 Type-A and Type-C on the case I/O as well as an Addressable RGB Lighting control button which enables lighting changes with just the push of a button. There’s space for a 240 mm AIO and overall it just looks good.

ASUS is also unleashing some powerful gaming desktops with cream of the crop components. The system we saw at CES 2020 is the GA35 which is built around the Ryzen 9 3950X. The upcoming GT35 will feature 10th Generation Intel Core processors.

The ROG STRIX GA35 is built with some serious hardware, as mentioned it is available on the high end with the Ryzen 3950X 16-core 32-thread CPU, up to 64 GB of 3200 MHz DDR4, GeForce RTX 2080 Ti, up to 1 TB M.2 NVMe PCIe SSD nestled in a ROG STRIX X570-F motherboard. The case is designed for optimal cooling and also features a dual 2.5 inch SSD hot-swap bay. For full details and build options, you can check them out the full ROG STRIX GA35 announcement.

Among the many displays, ASUS had The ROG Swift 360 Hz set up in a blur busters demo with the two displays side by side showing the very visible difference that 360 Hz makes when compared to more traditional refresh rates. This is the same display I spoke of in the Nvidia CES 2020 article we published previously. In this demonstration, there was an identical scene scrolling from right to left on both monitors. One was set at 360 Hz while the other was adjustable from 60 Hz up to 240 Hz. In this configuration, it made it very obvious the 360 Hz display was so much clearer during movement eliminating much of the blur typically seen in this type of situation. ASUS has more details about ROG Swift 360 monitor on their site. 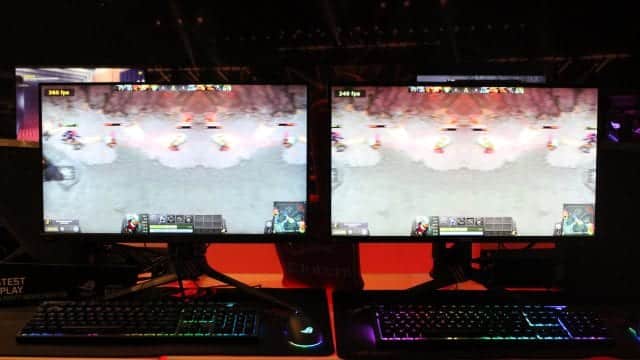 Next up is the ROG Swift PG32UQX Mini LED 4K high-dynamic-range (HDR) gaming monitor. This monitor runs at 144 Hz and features 1152 dimming zones. The display is backlit by mini LEDs and not just one light source this greatly improves the visible contrast on the screen. In dark scenes with explosions or other light sources, a single backlight needs to pick a “middle ground” to accommodate the black and the whites of the scene. The ROG Swift PG32UQX gets around this with 1152 dimming zones on the screen using mini LEDs as the backlight source. This practically eliminates the washed-out blacks and really improves the clarity of the image/scene. Here’s a link for more details related to the ROG Swift PG32UQX. 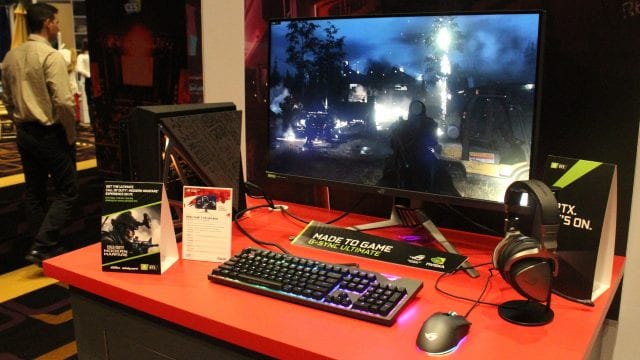 Just to clarify this is a single die GPU and not a dual die as the naming may suggest. The RTX 2070 MINI is a very compact version of the RTX 2070 designed for the new Intel NUC 9 Extreme Kit and Intel NUC 9 Pro Kit, as well as other small-form-factor (SFF) solutions. It’s a two-slot design with 8 GB of GDDR6 using dual high static pressure Axial Tech fans for improved cooling. For more details check out the Dual GeForce RTX 2070 MINI announcement on ASUS’s website. 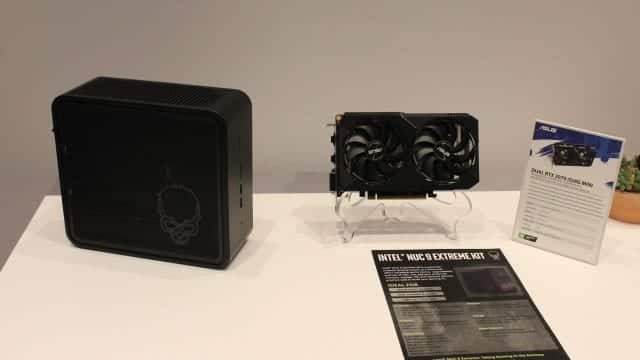 We teased you a bit with a few results and several pictures of the ASUS Maximus VI Extreme in our initial Haswell review. Sorry this took so long, but this motherboard has more features than you can even imagine. The wait is over though and now we’re here to cover everything you could want to know about the Maximus VI Extreme!

Phanteks has recently announced the launch of its Glacier GPU full cover water blocks for the ASUS RTX 3090 Ti Strix and Tuf models. The Glacier line of water blocks features nickel-plated copper with a clear acrylic top and looks amazing with the included addressable RGB lighting. Each model is available with black or chrome accent pieces. For pricing and availability please read Phanteks’ press release below.

There are a couple of very interesting new additions to their ROG display lineup notably the ROG Swift 360 Hz panel and the ROG Swift PG32UQX. We also saw some extreme prebuilt desktops, case innovations, and an SFF (small form factor) RTX 2070 designed with the Intel NUC in mind.