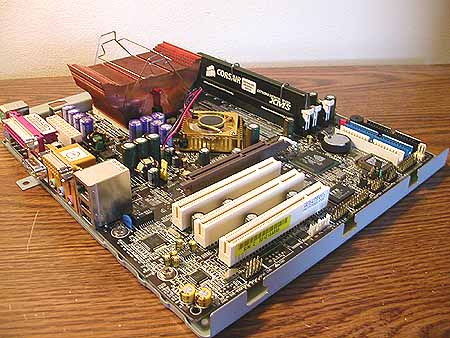 The good folks at Newegg were kind enough to let us have a look at a Chaintech 7NIL1
mATX factor motherboard today.

If you’ve been thinking of putting together a budget SFF or HTPC system, this would be a good place to start looking. Based on nVidia’s nForce2 northbridge chipset, it includes many of the features found on full size ATX boards. 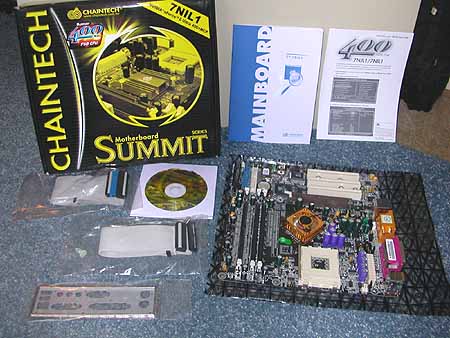 Included in the retail package are the usual suspects: Manual (with one page FSB update information), driver CD, one each IDE and floppy ribbons, and a board specific I/O plate.

The revision I have here now includes support for 200FSB Athlon CPU’s, which necessitates the update information.

Let’s take my usual stroll around the board, and see the highlights.

Looking down at the area around the CPU socket, we find a few things out about the board. This board uses two phase power, as can be seen just to the right of center. While not as good as a three phase solution, it’s certainly
adaquate for this board. The sticker on top of the I/O ports is a MAC address, giving this away as having onboard LAN.

Sharper eyes (or high interest) will note the four mounting holes around the CPU socket. If your heatsink requires these, it will work on this board.

As with most of the nForce2 based boards, the 20 pin ATX power socket is located behind the I/O ports.

This particular board doesn’t have the smaller square 4 pin auxiliary 12v socket. This, and the two phase power I’ll touch on again
a bit later.

Looking at the ports, we find pretty close to a standard ATX configuration. The USB and LAN ports are at the far end, rather than between the PS2 and COM/LPT1 ports, the reason for the included I/O port panel.

One of the two COM ports available is via a motherboard header. The PCB is wired for (but doesn’t include here) an S-Video out socket in the open hole where COM1 usually resides.

What’s that odd yellow 15 pin port there? Oh yes..a game port. It’s been a while since I used a board with one of those built in. With everything USB these days, it’s rather interesting the inclusion of this, most don’t have
this onboard anymore.

As with most nForce2 based solutions, this one also offers Dual Channel for the memory.

The installed northbridge heatsink/fan is a bit on the cheezy side, but you won’t be heating it up all that much. It should suffice for this board just fine. If you were inclined to replace it, there is a lot of room around
the northbridge for any aftermarket piece you might want to install yourself.

When building mATX boards, this area usually gets crammed full of everything under the sun that would normally sit in front of twice as many PCI slots. This board is no exception.

Stuffed into this corner we find the IDE and floppy sockets, CMOS battery, front panel connectors, four USB port headers, the BIOS chip/socket, the system speaker, jumpers for clearing the CMOS and other tasks, and a fan header.

I’m always amazed they find room for the southbridge chip itself, when looking at these boards.

I’ve highlighted one entry above, and here is the corresponding chip onboard below; 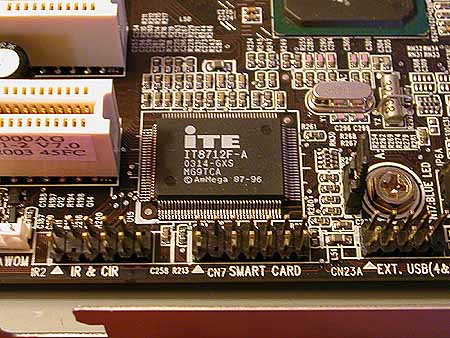 I’ve highlighted these specifically, and I will show you why. Below is a screenshot taken using a program called
Web Temp 3. Very nice program, which I hope to do a write up on soon.

There are actually two separate lines/readings happening in that top graph.

The following was taken with the familiar Motherboard Monitor 5 utility:

With a 255 degree swing, is there any wonder why I turned off the alarms?

I sat slack-jawed watching the temperature graph in Web Temp3 as those 33 minutes passed. I ran MBM5 a full 12 hours, just to confirm these readings.

A CPU temperature swing of -127c to +128c doesn’t impress me as being altogether too accurate. In looking at the CPU socket , I see no thermistor mounted in the board beneath where the
CPU would sit. I’m not certain how or where it’s getting these readings.

The System temperature as recorded by MBM5, also swung wildly back and forth, varying by 164c high to low.

Actually, the voltage readings weren’t fairly accurate either. A Winbond chip with a in-socket CPU thermistor would be a ton more accurate..

I got similar results with both CPUs.

The CPU heatsink/fan assembly I used was a Thermalright SLK900A, with a 80mm Sunon case fan attached. As can be seen above, there’s plenty of room around the CPU socket for these larger HSF’s.

Aside from the mentioned inaccurate temperature readings, the board worked quite well. Installation was troublefree, and those items not detected by Windows XP Pro SP1a (very few), are included on
the driver CD. I actually tried this out in two systems, one of them being my main watercooled rig; 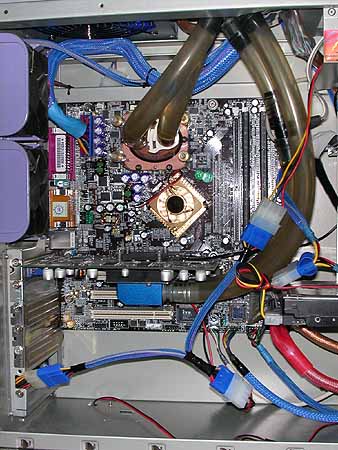 My NF7-S gets a well deserved vacation… =)

After setting it up, much to my chagrin, I found there are no overclocking options whatsoever available in the BIOS.

Well, I cannot say none truthfully. There is provision for FSB adjustments, but none for multiplier, or voltages for anything.

The upshot of this is, unless your CPU can get there on default voltage, you’re running it at default settings. Now, I know there’s means to change multipliers by connecting pins, voltages too.
but how many Joe Sixpacks’ are really going to attempt it?

In having no voltage options, this means that two phase power supply and lack of auxiliary voltage mentioned last page really aren’t a major issue. On a good note, this does help keep the production
(and thus the final retail) costs down, making this board very affordable.

The board did perform quite well, in all honesty. The onboard sound, while certainly not on par with an Audigy2 solution, worked as intended. The onboard LAN worked flawlessly.

Gaming, while handicapped by the lack of my usual overclocked horsepower, was admirable. Unreal Tournament 2004 and HALO both ran, albeit with the graphics settings turned down low. This has as much
to do with my outdated GeForce 4 Ti4200, as lack of raw CPU speed and system bandwidth. There is a decidedly large margin between 1733MHz at 133FSB and 2310MHz at 210FSB (what my XP2100+ usually runs) though.

I can’t get there without some additional voltage to the CPU however.

Truth be known, I actually liked this board, despite it’s shortcomings. Set up with the right components, this could be the foundation for a fine LAN party machine, or HTPC. For a SFF board, this does have a lot
of features to offer.

The current list price for this item is very reasonable (under $60 USD as I write this). If you’ve a budget to work with (who doesn’t these days), this might be something to consider.

The extremely inaccurate temperature readings doesn’t sit well with me, however. That would turn me off of this board more than lack of overclocking options. In as such, if you’re looking for an inexpensive,
mATX format alternative to an NF7-S, look elsewhere. You will be disappointed.

If overclocking isn’t your intentions, this might be worth a look.

I’d like to thank Newegg for letting us look at this motherboard today.

SUMMARY: The worst thing about this board is its name; aside from that, Iwill ranks right up there with the ASUS P3V4X and SOYO 6VCA. Iwill was kind enough to send a sample of their VD133 Pro motherboard; this is