Bill Leggett just did a great article about case ducting that showed a genuine temperature and noise reduction. I’ve been working on a similar ducting project for a while, and the results have been absolutely amazing.

I bought a new case to replace my 1997 overly-cramped box that used those annoying drive brackets. The new case is nice & roomy and has great ventilation. Unfortunately, I encountered the classic modder’s dilemma:

“Should I mod my brand new case to include the improvements of the old one, or just bear the slowness of ‘stock’ speeds for a while?”

For me, this was a difficult choice. Below is a goodbye picture of the old case as I was taking everything apart:

It was an Athlon 2500+ @ 3200+ with a Swiftech block, 1986 Chevette heater core and Eheim 1250 pump – all ½” internal flow. This water-based mod was awesome at being ultra-quiet and ran very cool. Again, the downside was the lack of space and inconvenient features of the case.

For the new case, I bought a surprisingly great air-cooled heatsink. I also added a 9800XT to replace my 9800nonPro and threw in a gigabit Ethernet card as well. Yea Newegg!

Once the box was running, the CPU temps were great. Then, the all of the temperatures started climbing… for an hour or so – I started getting nervous.

The case temp finally leveled out at about 35ºC (ambient 26ºC) with the case door closed. The processor was running at 67ºC and all of the motherboard power and chipset components were nearly untouchable. The new video card was also cooking. The case fans were definitely blowing out hot air, but my system temps were terrible. I almost made the call to start cutting up the case, but I thought I’d try a few non-destructive ideas first.

I Photoshop’d a picture of the apparent heat problem in my case. Though I had a good heatsink, the temps within the case were already nearly 10ºC over ambient. The case fans were sucking out hot air, but the case has so much hot air that it never made much of a dent.

The cool air comes in at the front of the case and gets mixed with the warm air in the case. Directing a 120 mm fan at the video card brought the GPU temperatures down a few degrees, but not much. I definitely needed something more effective. You can see the thermocouple at the base of the CPU heatsink starting to cry:

His greatest lesson was about “Volume vs Flow”. The key principle in cooling something is to have as small a cooling Volume as possible and as great a cooling Flow as you can manage. By limiting the volume of cooling fluid (air or water), you concentrate the coolant on the hot stuff.

In a big roomy case, the “fresh air” is already warm by the time it gets to the heatsink, then gets recycled around the CPU a couple times while waiting for the case fans to suck it out.

Bill Leggett’s article shows a way to use ductwork to bring cool air directly to the hot parts & increase the cooling efficiency. This works well for cooling those parts.

The downside of bringing air in this way is two-fold:

It’s clear that Bill did a great job & the price was right, but I’d be afraid to leave the box on in a warm room. This explains the increased power supply temps.
{mospagebreak}

My approach used the Volume Vs. Flow principle to

I also wanted to cool the motherboard power FETs, memory, and the chipset at the same time.

Here was my “paper & tape” prototype:

I used the case fans to maintain suction under the duct. The CPU fan blows cool case air over the processor and the heat is immediately sucked out of the case. The front of the duct (right) is open, and barely clears the memory sticks. The low profile of the duct ensures that the air is moving directly over the chipset, FETs, and memory. It also prevents the power supply from getting pre-heated air.

The case temp dropped to 31ºC and the temperature of the CPU dropped to 43ºC. WOW! The air coming out of the power supply also felt much cooler than it was before.

While I spent a solid hour getting the dimensions right on the paper prototype, it saved me time in the long run. By unfolding the paper over the foam, I was able to use it as a pre-measured template for the final duct.

There are some tricks to cutting and folding foam board, so be sure to practice if you try this. Cutting 1/16″ wide strips of the paper off of the underside (rather than slitting the top) allows you to make beautiful, clean folds. I learned that AFTER I made my first try below.

I decided to make a similar shroud for the video and gigabit Ethernet card by moving the 120 mm fan down and making a box to blow the hot air out of the open expansion slots. You can see a glimpse of the thermocouple on the video card for temps.

A picture of the whole system is below:

I used some of the leftover foam board block the view of the power supply and place under the motherboard. There’s not much Bling to see from the side window, and lots of geeks want to show off their goods at the LAN parties… So I plan to have some fun with either black-lights and glow-in-the-dark paint… OR coming up with a theme.

The black foam board can be painted, lit below with LEDs or covered with fur if you want… all for the low price of $3.50 a sheet. If I had the ability to make a Plexiglas version as nice as Bill’s work, I think I’d start selling them!

For you Stats Junkies, here are the spec’s on the final system with the Video shroud:

I don’t have a way to measure noise, but it’s noticeably quieter. I was able to remove the side and front case fans with no hit on cooling at all. The ducting also slows the rear case fans due to the suction, making them much quieter as well.

It’s was hard for me to accept, but I think my glitzy water cooling setup has been trumped by a “Cheap as Free”, low-tech piece of cardboard. It might not get the “Wows”, but it works like a champ.

I had a lot of responses to my article and many asked for me to do something in Plexiglas to make it easier to see. I just upgraded to an Athlon 64 & DFI Lanparty motherboard, so I made up a new duct for it. Here are two pictures of the case that show the venting: 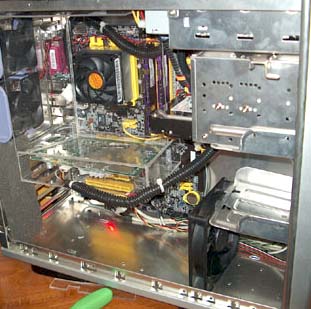 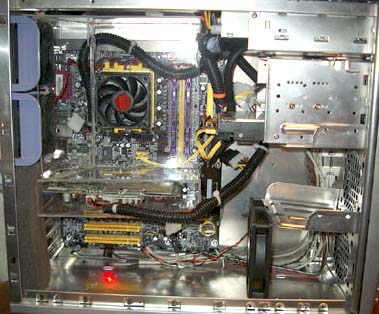 The duct extends from the video card beyond the top of the motherboard. It’s fit to be flush with the case. Here are closeups: 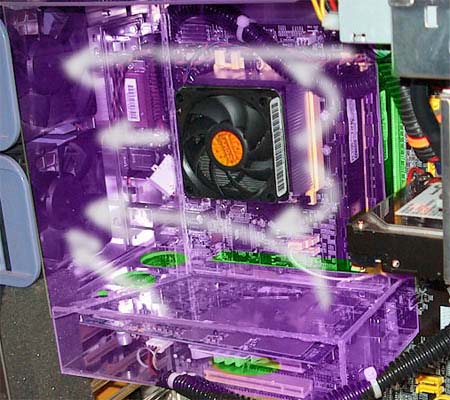 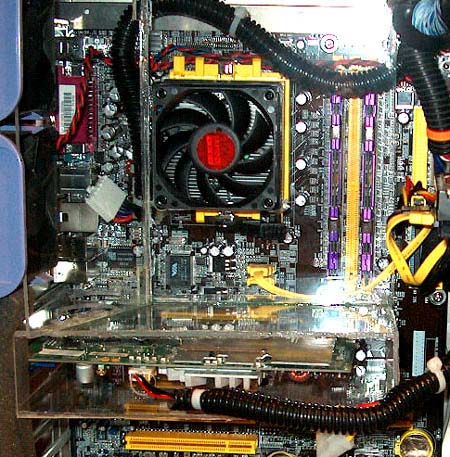