I have been playing with evaporative coolers ever since Steve published his results HERE. So far, I have built 4 different models. I have been focusing on small, low-flow versions made with 2 litre pop bottles and 10 inch drop heights. However, I had just completed the voltage modification for my Asus A7V. I could now take the voltage on the core up to 2.4 volts and I wanted a powerful cooler to test the new speed limits. 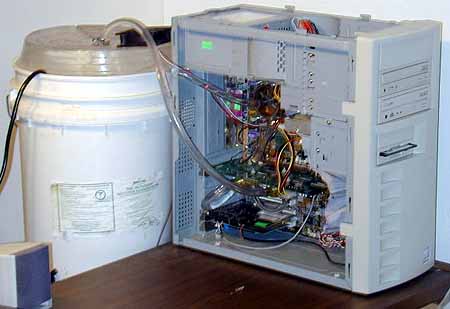 This is what I came up with after a few minutes of thought and assembly. You might laugh at this experiment, but the results were quite good and the project required very little money. I made the cooling tower from a spare five gallon pail. I took a lid and put a small hole in the center for the showerhead pipe. I then made a hole for a three inch case fan to blow down and a similar hole for the exhaust up. Water is drawn by a 190 gallon/hour Danner pump that is submerged inside the bucket 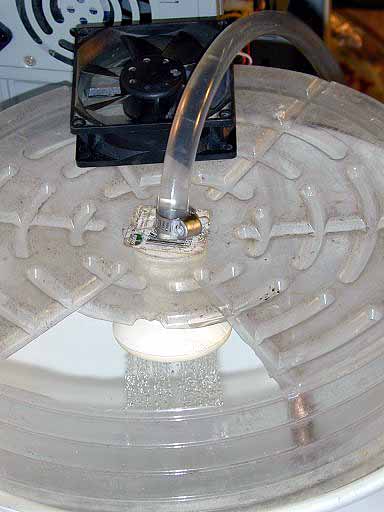 How did it do?

The Duron 600, combined with an overclocked water-cooled Voodoo 5, immediately became stable at 1070 Mhz, 2.10 volts and nothing could crash it. The processor was 26C/78F at 80% load and would not rise above 30 C under full load.

After 20 hours straight with a load of at least 80% the entire time, the water temperature inside the bucket was 15.5 C. During this time, the room was about 20 C. I have now changed the fan to a 80 mm Sunon and enlarged the exhaust hole. In similar circumstances the processor went down to 25 C with an 80% load, while the water dropped to 15 C. 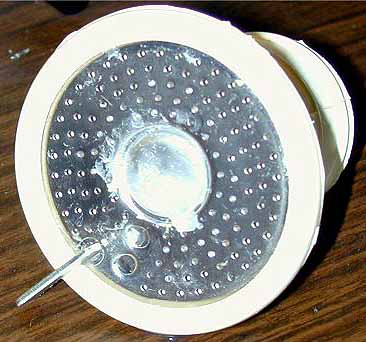 This was all accomplished by a tiny showerhead which is 2 inches across – a $3 hardware part called a water aerator. It has a metal grill with many small holes. The body is made from rubber and it squeezes onto a kitchen tap. I have modified it to match the flow of my pump. 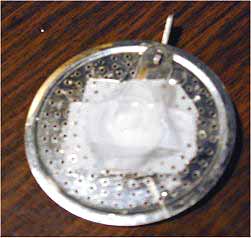 It can be difficult get a good balance between maintaining individual water streams from the showerhead, which produce lots of vapor, while not restricting the water flow. This part made it easy. I removed the grill and sealed the center hole with Marine Goop. I then added different pieces of tape until as many streams as possible would stay distinct. 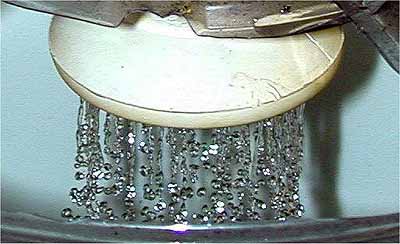 During the experiment I learned many things. My cooling seemed to be adequate, but the generic 300 watt power supply was having problems providing clean power, once the processor was set to 2.3 volts. I suspect that the power requirements of the overclocked Voodoo 5 are far larger than the typical video card, and was contributing to the problem. Thus, I recommend a good power supply for beyond 2.2 volts.

It was fun to see what I could make into a cooler. Plastic buckets are leak proof and you should be able to find one for free. The computer will run as high as 1144 Mhz, but it is not quite stable. It is stable at 1123 Mhz and with some work, it should become stable at higher speeds

I will keep everybody up to date as I finalize the design of the smaller, more efficient cooler. I think I have a good showerhead. My goal is similar performance inside a small, 12 inch tube. I will explain the combined water block/flow meter in a future article.

Through what some may consider nefarious means, I have acquired an Evercool Buffalo Heatpipe CPU cooler.