Well, I polished up both sides of the copper plate, as shown below. The “scratch” you see is barely visible – the flash’s angle I had to use highlights any marks on the plate. 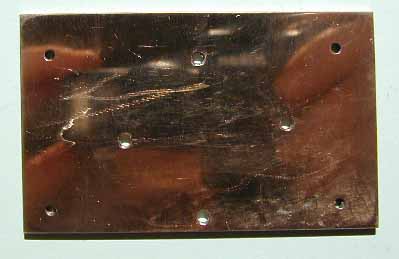 I mounted it again with the following results:

The ambient temp is a little higher, so basically no change from earlier results. Damn! Thought we had something here, but that’s the way it goes. Pablo sent in his experience with the ORB HERE, which pretty much parallels the results I achieved.

The one plus I give to the ORB is that it’s a lot quieter than some other heatsinks around.

SUMMARY 10/3/00: Adding a copper plate to hold the HP ORB results in OK temps, but not outstanding. More lapping to ensure better contact may drive temps down some. 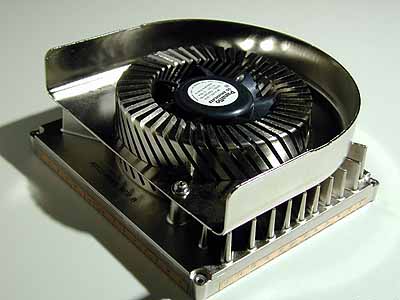 Shown above is the HP ORB in it’s “natural” environment; I bought one from from All Electronics (catalog numbers are CF-75 and CF-82) this way to see if there was anything else that could be used for cooling. Don’t waste your money – the plate on which the ORB sits is really big and I can’t see a use for it; if you buy one, just get the ORB.

The objective was to use the four holes that come standard on all Socket A motherboards to mount the ORB onto a copper plate and then bolt this onto the CPU. 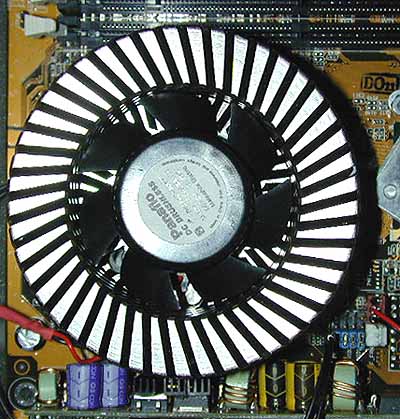 It clears the DIMM slot with a little room to spare, but not much.

To put this together, I drilled and tapped the following:

Measuring clearances is really critical – you have to offset the ORB relative to the socket so that is clears the A7V’s power riser while not interfering with the DIMM slot.

I first tried this with an aluminum plate to see what problems I would encounter, and I think the best approach is to measure and drill the motherboard holes first, mount it on the board, then position the ORB and draw its base on the plate. Then drill and tap four holes to mount the ORB onto the plate. 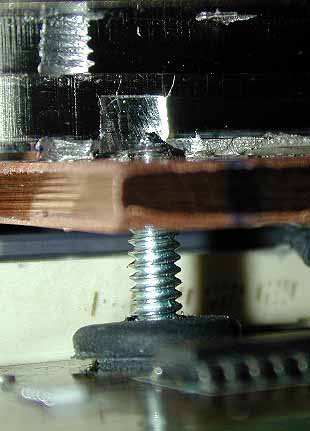 In the detail shot above, you will note I had to drill out an indentation on the ORB so the screws would clear the ORB’s base. I used 4-40 bolts for all mounting bolts. I also used rubber grommets in the motherboard’s holes for insulation.

This shows the finished product; the copper plate is secured by four bolts which surround the CPU’s core. Make sure you clear the core! The ORB’s base is about 1/4″/5mm beyond the copper plate. 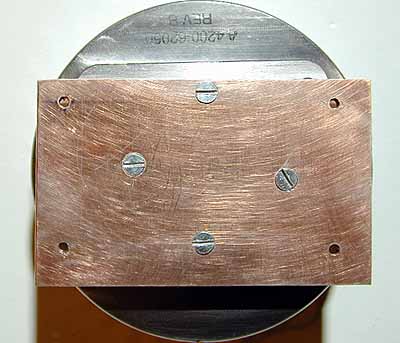 You can also see that the ORB’s edge interferes with the bolt’s clearance by a small margin.

Well, I wish I could tell you I had uncovered the Rosetta Stone for AMD cooling, but not so. It wasn’t shabby, just not as good as I thought:

I did a “post mortem” on the setup and discovered that the Arctic Silver grease left a void where the CPU core contacts the plate. I think the plate is not as flat as it could be, and it’s back to the shop to do some more sanding. What’s critical is that the copper-ORB joint be as flat as possible, so I’ll work it and see what happens.

If you have an ORB kicking around, it’s not a bad cooler. Whether the work involved is worth it is another matter. If you’ve used this for AMD cooling, send an email about your experience.

UPDATE 8/31/00 – Email from Mike: “I just read your update to the Tidal Pool water block article and all I can say is – DUH! I think there’s a WHOLE lot of people out there who don’t remember the