A no-brainer for hot RAM – Joe

SUMMARY: A no-brainer for hot RAM. 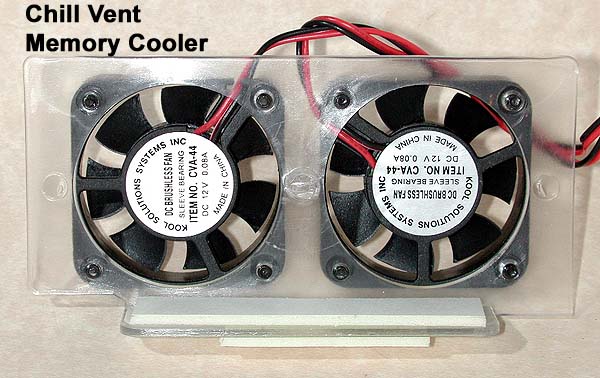 The good guys at Kool Solutions were nice enough to send a sample of their Chill Vent Memory Cooler to try out. This is a very simple plastic bracket with two 40 mm fans spinning about 500 rpm to direct air onto RAM chips.

I am not a big fan of the “clamshell” heat spreaders that almost all RAM features because although a good idea, I have found its implementation usually poor. When I peel off the clamshell, I typically find that the thermal tape holding the clamshell to the RAM chips contacts something like 1/3 off the chips’ surface. In addition, the thermal tape is so thick that I wonder how effective it is at transmitting heat to the spreader.

IMHO, it would be more effective to peel off the clamshell and use something like the Kool Solutions Memory Cooler to direct air over the chips directly. In use, it fits over the RAM chips: 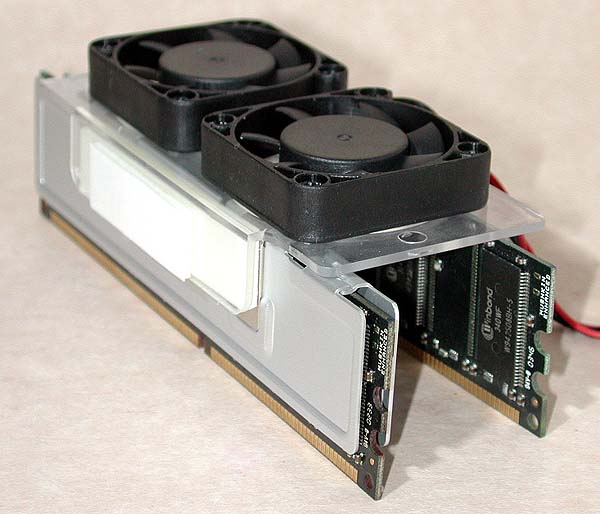 There is sticky tape on both sides of the lip so you can mount it.

To test the Chill Vent Memory Cooler, I mounted it on two bare RAM slices (no clamshell) on which I mounted a thermocouple to one of the chips near the center. I measured temps with and without the memory cooler while running Prime 95.

The Chill Vent Memory Cooler did the job nicely – almost a 4 ºC difference. I measured fan rpms at about 5500 rpm; they are not noisy.

Simple and effective, the Chill Vent Memory Cooler is an effective product for memory chip cooling.

TeamGroup just announced its latest memory series, the T-Force Delta RGB DDR5 Gaming Memory. This next generation of DDR5 memory will feature Intel XMP 3.0 support, capacities of up to 32 GB, and frequencies of up to 5600 MHz. The T-Force Delta RGB will also be equipped with oversized heat spreaders and, as the name implies, RGB lighting. Pricing is unknown at this time but availability is expected in the fourth quarter of 2021. Below is TeamGroup’s press release.

A Gig of the Good Stuff – Brian Berryman