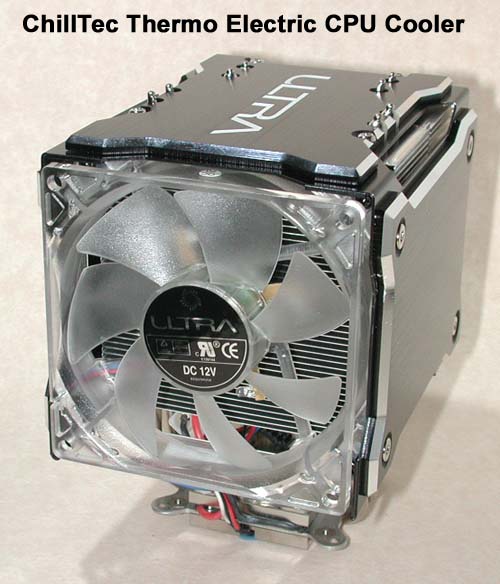 The good guys at Ultra Products were nice enough to send a sample of their ChillTec Thermo Electric CPU Cooler to test out. A TEC is a solid-state heat transfer device which, in use, has one side that becomes very cool and one side that becomes quite hot. By dissipating the heat from the hot side, the cool side remains cool. A TEC when not powered is not effective to transfer heat.

One issue with a TEC is that in use, it’s either on or off – when on, the cool side (depending on heat load) can be under ambient temperature; this results in moisture condensing on the cold surface¹, an obvious problem in electronic cooling. 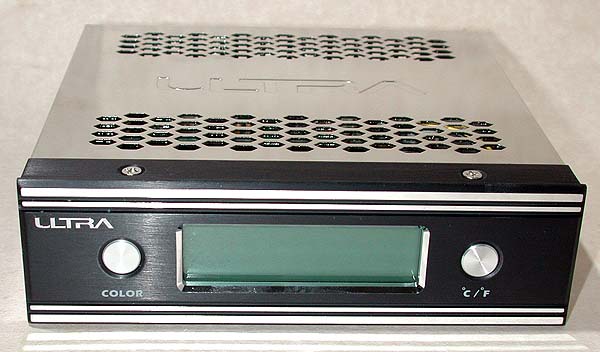 As the back shows, there are ports for controlling the TEC and a power port.

A closer look at the base clearly shows the TEC between two plates:

Very important – note that the four heatpipes are split, two dissipating heat with the TEC off, two kicking in when the TEC is powered. This means that when the TEC is off, only two heatpipes are dissipating heat – this may be enough under low power conditions; One question I have is are the two which dissipate the TECs heat when powered sufficient to deliver aggressive cooling performance.

The second question I have is fin density – The fins are relatively close together and long; pushing lots of air through this array when under load requires a high cfm fan to overcome system resistance.

Parts that ship with the unit for multiple CPU mounting schemes: 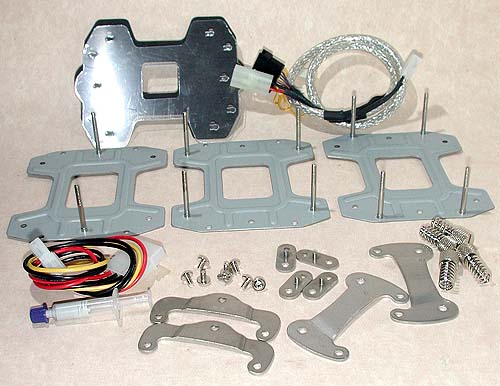 Only testing will tell how the questions I have will be answered – stay tuned!

¹ Strictly speaking, moisture condenses when temps are below the dew point – however, during hot, humid weather, the dew point can be almost the same as ambient temps.

The display on the controller unit shows the TEC temp:

The “CPU” refers to the image of the figure shovelling – it represents the CPU’s activity, although I did not see any real difference at idle or load. It also has a timer and total hours display.

The ChillTec was tested on an Asus P5WD2 motherboard P4 Motherboard Test Platform with a modified Pentium D 805 to read CPU case temps (both supplied by Directron). This setup is not inside a case.

Results place the ChillTec Thermo Electric CPU Cooler in the topmost rank of heatsinks tested to date (Heatsink Ranking) with the fan at its mid speed setting; there are no controls to allow users to vary fan speed.

At idle, at least for the setup I have, the fan continually cycled between its low and mid setting about every 10 seconds – could drive some people nuts. In all the testing I did, the fan never ran at its high speed setting. I also overclocked the CPU to 3.6 GHz (180 FSB) with the following results:

It was not stable at 190 FSB and above, failing Prime 95 after five minutes with a hardware error; at speeds above 190 with the setup described above, I had not had overclocking success.

The ChillTec Thermo Electric CPU Cooler was a top performer, although it does place more of a power burden on systems compared to non-TEC heatsinks. Its performance is equal to the best aircooled heatsinks I have tested to date.

In addition, there is increased heat dissipation required due to the 50 watt TEC – case cooling may need a boost to compensate. MSRP $150.