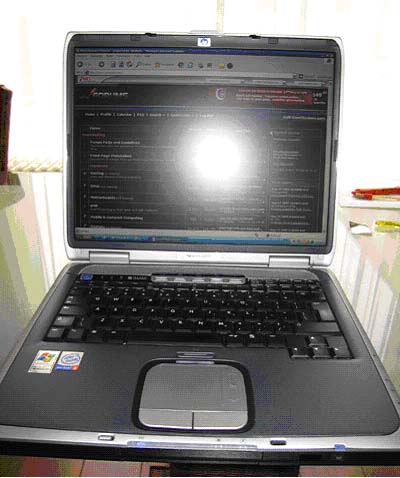 I’ve had my HP ZE5517EA laptop for almost 1.5 years now. Lately it sometimes BSOD’s or simply locks up. It’s been returned to HP when it was still under warranty but they sent it back, stating “fault not reproduced, updated BIOS and restored original system software”.

Of course the fault was still there. After reading a few things online about clogged-up cooling causing laptop failures, I eventually decided to take it apart myself to clean the cooling system and improve it with Arctic Silver 5 compound. There’s almost no info to be found about taking this laptop model apart.

I know this particular model comes in a lot of flavours and is still sold with AMD’s or Intel’s Celeron-D and Centrino technology today! Some have a single or multiple fan-configuration, floppy or flashcard drive, some have wireless on board, some don’t etc. etc. I hope this article can be used as a general guide on how to safely service your HP laptop with this kind of housing!

Turn the laptop upside down and locate the hard disk-bay.
Remove the rubber ‘peg’: 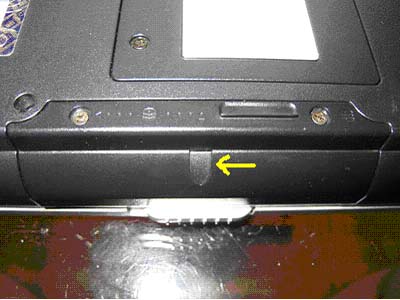 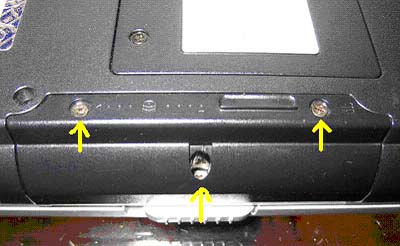 Remove the hard disk and store it together with its 3 screws and rubber ‘peg’:

Remove the 2 screws at the back of the hinge-covers:

You can now carefully pry out the panel area as shown: 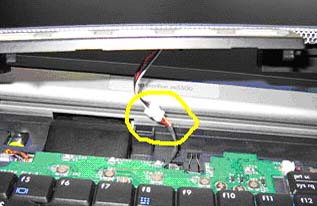 Remove the 4 screws holding down the keyboard:

Slide the keyboard forward and tilt it out: 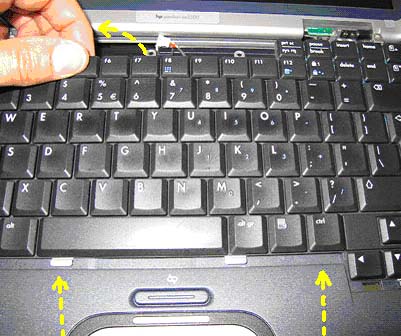 Disconnect the keyboard by lifting the white tab on the connector while pulling the flat cable out: 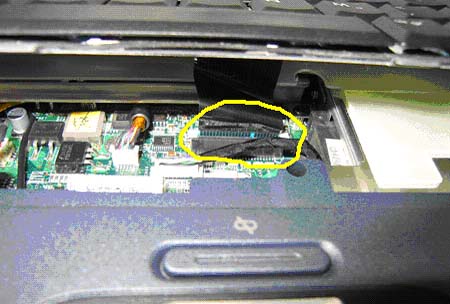 At each hinge, remove the screw holding down the 54g antenna PCB (if applicable): 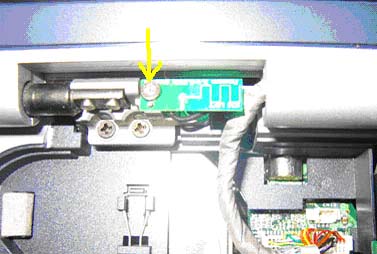 Again at each hinge, remove a total of 6 screws. Watch the tiny blue ground-lead at the left hinge! (Don’t forget to put it back on when rebuilding everything later on): 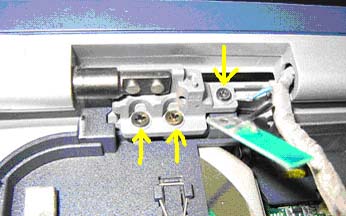 Disconnect the LCD connector and safely store the screen/lid: 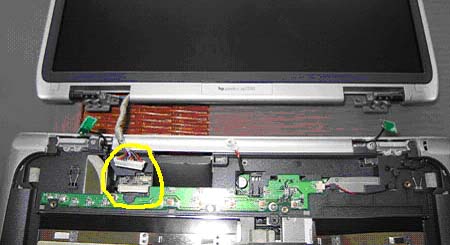 Remove ALL the screws shown on the bottom and back of the housing: 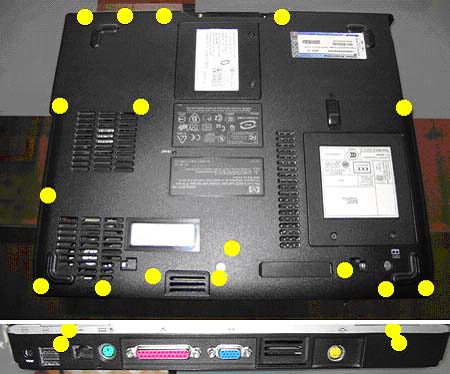 Remove the 5 screws remaining in the top cover: 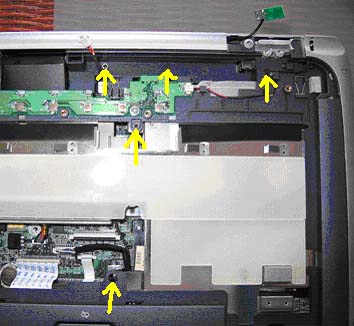 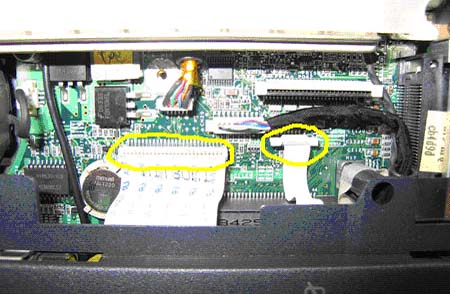 Tilt out and detach the top cover complete with scroll pad and floppy (or flash card reader?!): 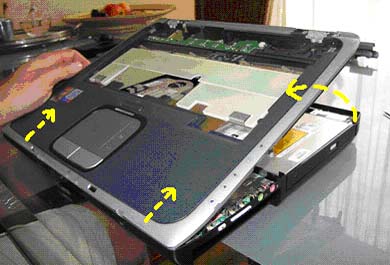 Carefully remove the heatpipe cooling system by loosening the 4 screws in a cross-pattern. Any waxpad or thermal compound will come right off with it: 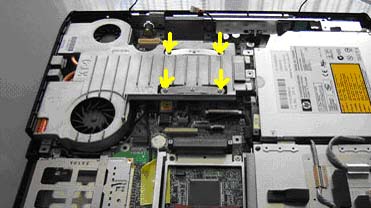 Carefully remove all the wax or thermal compound residue from the CPU with some alcohol or nail polish remover (make sure not to spill around!!!): 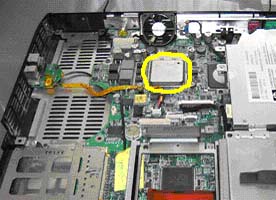 In this case, I will replace the standard aluminum waxpad with some Arctic Silver 5: 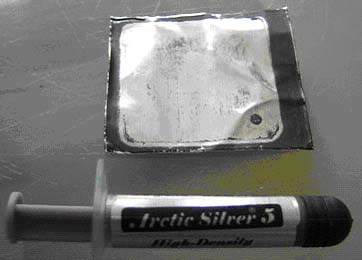 Carefully remove all the wax or thermal compound residue from the heatpipe’s contact area with some alcohol or nail polish-remover: 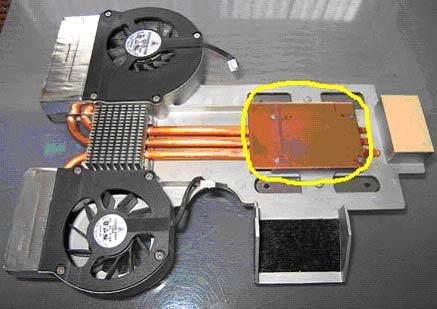 Now clean all components using a vacuum cleaner and a long soft-haired brush, or a can of compressed air, etc. (The glasses are to keep groups of screws separated!): 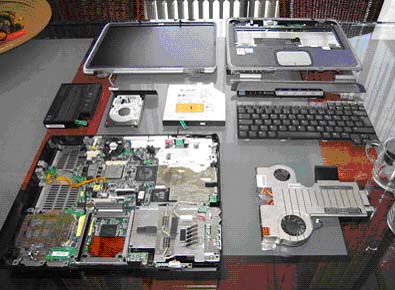 After everything is dust-free and otherwise cleaned, apply a dab of Arctic Silver 5 or the compound of your liking, and rebuild the entire laptop in reverse order. It’s been a few days now since I’ve done it and no Blue Screen Of Death or lockup so far! The cooling system is noticeably more efficient now. The fan(s) used to run all the time but now they are turning on and shutting off again (Like when this laptop was new, yay!). In fact, I wrote this article on it!

The cat was watching it all in disbelief: 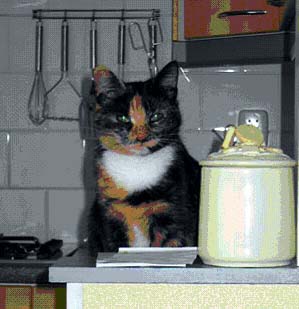 I can tell you with the improved cooling, higher FSB and RAM speeds, this laptop feels like a Centrino system (I have a 1.6 Ghz Banias laptop from work.) Future upgrades will definitely include going to 1 GB RAM and a faster HDD.

UPDATE: I’m getting emails about how I knew I could upgrade the CPU, so this is how I figured it out:

I searched the web to confirm
this chipset supports both 400 and 533FSB CPU’s. Furthermore, when I looked
on the HP support site, I found that any BIOS-updates were the same version
for all these laptops! So they all seem to have the same mainboard.

Then I
looked at the CPU wattages at Intel’s processor spec finder. My old 2.3
draws around 58 watts at full load, a 2.8 draws 68.4 watts, so I knew these
mainboards must at least support that kind of wattage.

When it seemed to be
quite feasible, I bought a used CPU off Ebay and it worked like a charm!
I NEVER had any crash or BSOD since I installed it 6 weeks ago! The RAM is now
running 1:1 instead of 3:4, and even when Speedstep drops down to 1600 Mhz, it
runs with 533FSB instead of 400FSB with my old CPU.

Are other CPUs possible?

I looked it up and a Mobile P4 3.20/533FSB D1 (Northwood) draws
around 76 watts. This is only 7 watts more than my 2.8, so it might work – but would
you want to take the risk of frying your mainboard if its power regulators
just aren’t beefy enough?!

I use SpeedswitchXP, so my CPU runs at 1600 Mhz and
automatically switches to 2800 Mhz whenever CPU load gets above 50%. At
1600 Mhz it works perfectly and keeps the cooling quiet. Maybe it will be
OK when you have a 3.2 that’s at 1600 Mhz most of the time, but if you run
SETI of Folding, it’s a good bet the power regulators and/or cooling isn’t
up to the task with a 3.2.

Arjan den Ridder (aka ‘Lancelot’ in the OCForums) The Netherlands

The Value of Speculation

Digital Ostriches Crucial finally brought out PC2100 and cut the price of DDR in half. Took a good deal longer than I thought, or probably even Crucial, but it happened. I’ve told you a bunch of times that was going

This started off as a comparison between the IWill Side RAID66 and the hacked version of the Promise competition. However, it quickly dawned on me that the real story was not what was being measured but the measurements. I’ll compare

The following test results were on an ABIT KT7, Duron 800 @ 1000, 52.6 watts, running Prime95 to stress the CPU. The test was run such that the motherboard was always as warm. A hole was drilled into the base