My Dad’s old Slot 1 machine has been gradually upgraded over the years. It started as a PII, something like 200 MHz, with a slow HDD, an ATI 3D Rage II PCI video card and a 235W PSU. Now it has a PIII-450 and a 40GB 7200rpm Western Digital HDD. I installed Windows XP on the new hard drive and started getting some weird glitches related to the video card.

The task bar would go primitive looking on me and there would be a notice on the screen, after the PC had supposedly been on standby, saying that the video driver prevented it from going into standby. The driver in use was the one built into WinXP. ATI’s site said this was the best driver for the card.

I said, “Hey Dad, just get a cheap GF2MX-200 and all will be right with the world once again.” The machine is only really used for the net and word processing anyway. He bought the new card, I slapped it in the unused AGP slot, fired up the system and all was right with the world again. At least until I touched the heatsink on the GPU:

It was so hot I was literally burned. What was the problem? There was no airflow in the case. 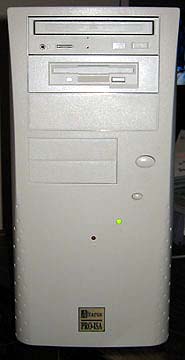 Front of case with no vents whatsoever.

There were no intake fans and the only exhaust fan is through the PSU. I scoped out the possibility of adding fans and found that there was no space on the back panel for one, and the lower front would need some Dremeling to make a fan worthwhile, as well as some holes drilled into the faceplate. 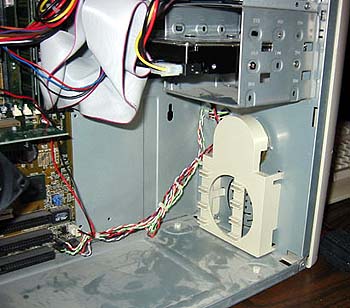 Interior front of case. Fan/speaker caddy in front of a “vent.”

This was not a project that warranted a large investment of time or money:

I needed a quick and dirty solution that would just get some system stability.

I rooted around and found an old generic 80 mm fan with a mobo connector on it – Perfect! Now where to put it? Even if I hacked up the front of the case and put the fan there, it would still be too far from the GPU to make a difference. I need to have it blowing right on the GPU.

I dug through my drawer of miscellaneous screws and found a 1 inch long screw with the same threading as the ubiquitous hex head PC case screw: 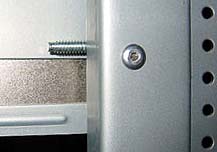 I found a fiber washer 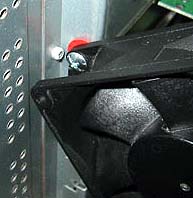 to kill vibrations (the red thing), and viola! 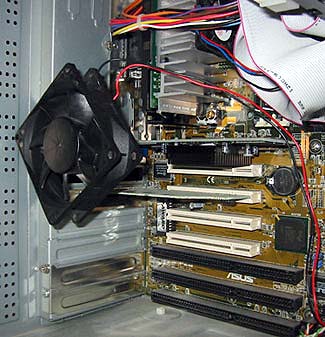 Finally, all is right with the world once again!

This cost nothing, required nothing more than a screwdriver, and now the heatsink on the GPU is barely warm to the touch. There is no noticeable difference in sound levels. The fan is a couple inches from the side panel of the case so there is no backpressure. 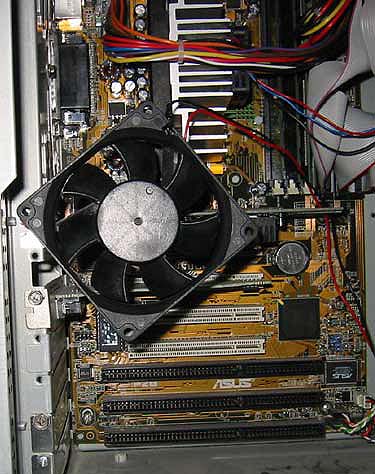 Note how the fan’s flow overlaps both the GPU and heatsinks.

The back of the case has that column of vent holes to provide incoming air. I removed the slot cover right below the video card so some of the air can exit there. The airflow from the fan blows strongly on the video card and also helps on the CPU heatsink. 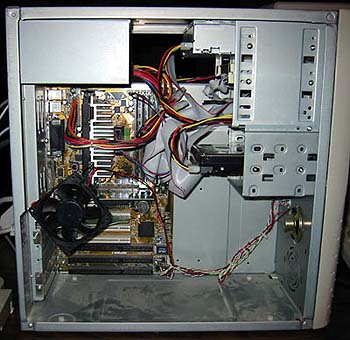 nVidia: What Do You Do?

A sword continues to hang over nVidia’s head.  What should you do about it?