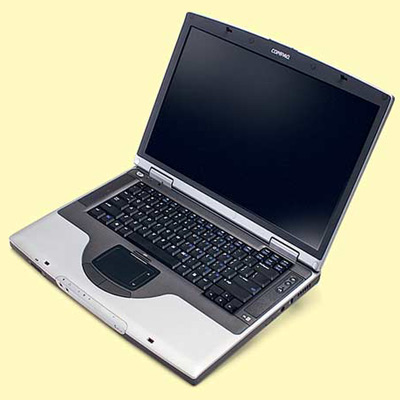 I’m not sure if anyone is interested in something this “old”, but since all
is relative and I continue to see specs on laptops that are similar to
mine….here’s a quick review of my Compaq Presario X1000

I searched and searched for what I felt was the perfect notebook (yes some
still call them notebooks). I really wanted something bigger, better,
faster. BUT, and this is a huge “but”, I also wanted to stay married, so
price, as with many was a huge factor. So I knew early on that “the
perfect notebook” was a bit out of reach.

With that in mind I decided to go out and hit all of the major vendors and see what they had as their top
of the line, knowing I was going to take a step or two back from that
threshold. I visited Dell, Gateway, Compaq, IBM and Sony. I lurked around
in Best Buy, Circuit City, Office Max and Office Depot. I scanned the web
for the “no one has ever heard of you brand names”.

I then stumbled upon these new (at the time) 15.4″ wide screen LCDs. To
understate it, I was stunned. So that was the first requirement on my
list. Next on my list was wireless technology and decent battery life. I
also had to have dedicated memory on the video card, not this shared
stuff. So with my list in hand, I began my search.

I quickly removed Dell
and Gateway from my list of possible vendors – I was hearing way too many
negatives about them. Next off the list were all the pricey vendors – bye
IBM, Sony, etc. I played around with an emachine at Best Buy, but
couldn’t find anyone that would customize it for me AND I was also hearing
mixed reviews about those.

I had a little $25 Staples gift certificate from my Discover credit
card burning a hole in my pocket, and I found out you could customize a
notebook at their site, so away I went. I figured I could get the features
I wanted, get rid of the ones I didn’t and come away with a price that I
was happy about. My budget was around $1500 – anything more and the wife
would be all over me (normally a good thing, but in this case not so much
of a good thing).

So the first thing I noticed was that Staples sells Compaq. I was OK with
that, having spent many years at the company I used to work for lugging
around Compaq notebooks. I even had one of the HUGE box-style portables,
where a regular size keyboard attached to the unit. I think these were
Compaq’s first attempt at portable computing back in the early 90’s. I
digress…

The next thing I noticed was the lack of AMD CPUs in the
notebooks. Darn. So I simply chose the cheapest “base” Presario (the
X1000 at the time) and started to remove/add features. I dumped the CD
burner and went for the DVD-ROM, dumped the extra memory so I could max-out
the Video graphics card with dedicated memory.

I went for the least amount
of hard drive space they had – 40 GB. Chose the “b” wireless, even though
they had the “g” – they just wanted way too much for the upgrade so I made a
sacrifice, figuring I could always add the PCMCIA card later on. I decided
not to buy the extra battery, figuring I could always find a cheap
knock-off later. No “free” bag, no extended warranties, no frills.

So here’s what I ended up with:

I wrote earlier about my funk after attending a local computer show HERE. I received a number of emails with similar impressions, confirming the sea-change in this business, most notably as laptops now account for the majority of PC sales.

Here’s the article suggesting that Apple should buy AMD. Here’s why there isn’t a snowball’s chance in hell of this happening. When Steven Jobs came back to Apple in 1997, it was going down the tubes, fast. The number of