SUMMARY: Visiting Taiwan and Computex is like the kid who got locked in the candy store – this is the motherlode.

I decided to go to Computex this year because I felt it was important to get up close and personal with those manufacturers whose products we test and you buy. I was honored to be invited to a number of manufacturers to discuss, in depth and off the record, where they are going and planning, and I think the relationships I started here will help us to bring you more depth in our reporting. 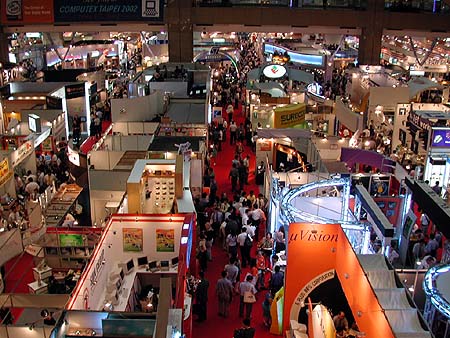 This is just a small portion of the show – it was in three different buildings. It took four days to see every exhibit, stopping to chat when finding something of interest.

What follows are some of my observations and a peek at some products that might be showing up in the retail channel shortly. For some real detailed product reporting, check over at Anandtech or Toms Hardware – I’m not going to rehash what they reported already.

I visited with all the manufacturers you are familiar with, and no big news here aside from variations on the theme. Intel is flexing its muscles by aggressively prodding motherboard manufacturers to promote P4 products. The RAMBUS connection is hurting Intel, as it cannot promote DDR/P4 solutions until next year. The Intel bonehead who thought they could muscle RAMBUS into an unreceptive market must wake up in cold sweats every night, although I am personally pleased to see how a competitive market provides checks and balances.

Of more immediate importance to folks buying motherboards is the erosion of quality control in manufacturing. Taiwan is in the midst of a major change, reminiscent of what Japan went through some years ago.

As Japan climbed up the industrialization ladder, it went from a producer of shoddy goods to quality manufacturing. As incomes rose and manufacturing labor become more expensive, Japan outsourced production to cheap labor countries while keeping the engineering at home. Fast forward to Taiwan and you see the same trend rapidly emerging.

The difference in the Taiwan case is the manufacturing is shifting to mainland China (PRC) while the Japanese shifted all over Asia. The problem motherboard manufacturers are wrestling with is QC (Quality Control). Right now, a “Made in China” label is not the same quality as “Made in Taiwan” and, as a consequence, those manufacturers who aggressively shifted production to the PRC for cost savings are having RMA problems, probably in direct proportion to the amount of production shifted to PRC.

This will change over time as it has in other cases – clearly the manufacturing challenge is cost efficient production at high quality levels. Problem is, when you buy stuff today, you may be frustrated with an RMA issue. If you have a choice, go for “Made in Taiwan”.

Having said all that, however, the real news for overclockers is yet to come – and it will shake things up. Stay tuned.

The only really interesting thing I saw (aside from Intel’s balloon attack on AMD) was the VIA C3; this is the “rejuvenated” Cyrix CPU. I spent some time chatting with them and they related that as of now, the C3 is an unlocked CPU with no plans to lock it up. This is a “value” CPU and I have not yet tested it, although the Cyrix was never considered a competitive overclocking or performance CPU.

One wonders why the brass and Intel can’t see the light of day on this one; most of the Intel folks (“Don’t quote me!”) at the show think multiplier locking is silly, but that’s Intel. I guess it depends on who wins the day – at Intel, the marketing guys have won while at AMD and VIA, I think the engineers won out.

Intel had a large booth pushing the P4 (DUH!) like crazy. However, this was the local Intel team, so nothing earth shaking could be gleaned. AMD had no floor booth – all very low key except for lots of AMD balloons. Intel, in a fit of pique, forced people to take them down; AMD brass then called around and the balloons start to reappear. Can you imagine the meetings at AMD and Intel’s corporate HQs? Incredible.

Lots of new “old” product on the floor; innovative designs were few and far between. The real news is what’s to come. I’m under NDAs on this one, so I can’t really tell you too much. However, you will see lots of copper heatsinks and more attention paid to noisy fans. There are a LOT of heatsink manufacturers that you will never see in retail channels – the OEM market is the top priority.

Thermaltake introduced their “Dragon ORB” series at the show: 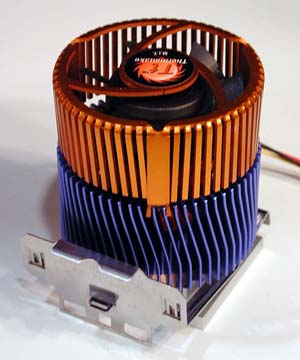 This product should start to show up in retail channels soon and is not just one but four product variations; one for P4 and three Socket A variations: One with a copper base (Dragon ORB 3), an aluminum base (ORB 1) and one with a “twin radial fin” (ORB2), which appears to be another set of fins in the center of the bottom ring of fins. 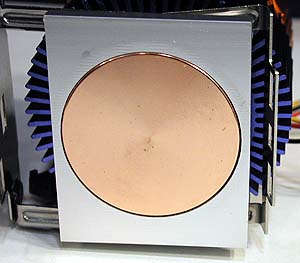 I could not secure a test sample at the show, so I can’t tell you how these perform. You will also see a Copper based Volcano showing up – this sports a round copper insert in the Volcano body – again, no tests on this one either.

LOTS of case manufacturers, nothing radical to report. More color options are coming and designs are getting more “trendy” – the case fronts are beginning to look like MTV designed them. I did run into two interesting items: 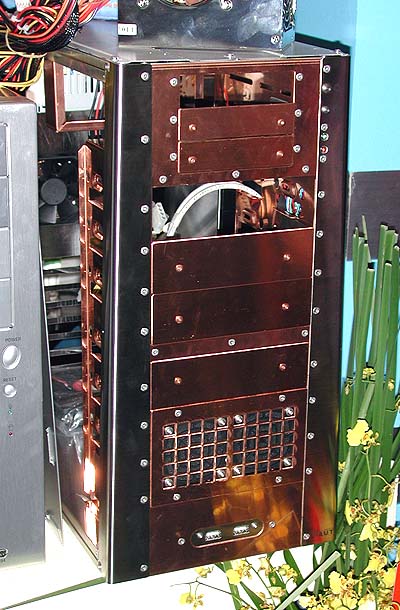 Don’t know if this will see the light of day, but it is cool looking. No plastic bezel on this one – just the copper-aluminum look. I think you may see more “industrial” looking fronts as case manufacturers try to stir things up.

Addtronics featured their fan bus, but with a twist: This bus uses a PCI card which can monitor four fans and has thermistors as part of the package.

If a fan fails, this system will start a “reserve” fan to take its place. In the pic below, the two right fans are spinning and the two left are not. If one fan stops, the others take over. 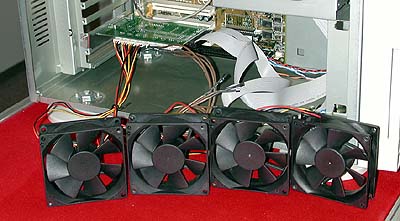 What can be interesting with this approach is to have a “fail-safe” fan hovering over the CPU fan – if it fails, another can kick in and save the CPU from frying. Looks like you can use the thermistors in a similar fashion. Point of all this is it looks like the case guys are eyeing add-ons for additional profit, so don’t be surprised to see more bus type products as integrated case items.

I did spend some time walking around Taiwan and thought you might find these shots interesting. Taiwan, to me, is New York City with Chinese signs and Rome’s motor scooters. The Taiwanese are about the most friendly people to foreigners that you will ever see – street vendors nodding and smiling at me was a common occurrence. The hotel I stayed at (The Golden China) had some of the nicest and most helpful staff you could ask for, as well as a great buffet breakfast.

The traffic can be pretty bad and I did see a lot of “innovative” driving techniques. Lots of signs are in English, but Taiwan is confusing enough that natives get lost in strange parts of town. I did have one day to myself and spent it at the National Place Museum – a MUST SEE in Taiwan. Its collection of Chinese antiquities is world renowned and gives a glimpse into how the Chinese culture evolved over the last 5000 years.

Taiwan, to me, is a vibrant, dynamic hotspot in Asia which typifies the best of the entrepreneurial spirit in a Far East setting. What struck me is the relatively young age of some of the company presidents I met – hard work does not go unrewarded here.

Motorscooters – the Volkswagen of Taiwan – you see them all over and sometimes in two rows on the sidewalk. 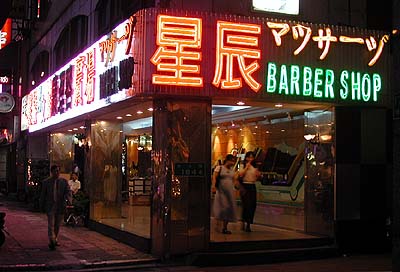 This is where you get a real hair raising experience. 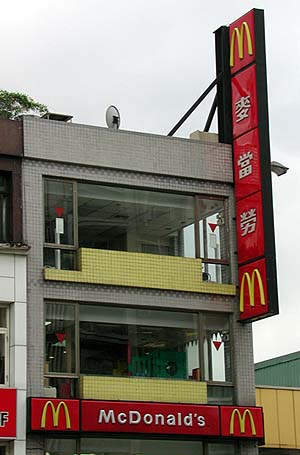 AH! Western civilization at its best. 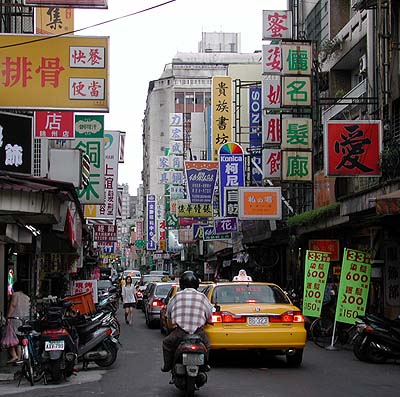 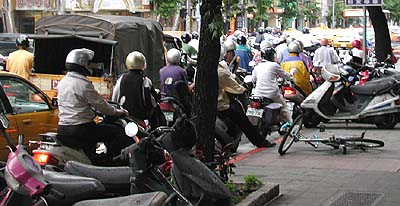 Waiting for the light to change – don’t EVER get caught in the middle!

The next one to two weeks are likely to be busy ones from the review perspective. We’ll probably see reviews of the Radeon 9800 Pro this week, though only the 3DMarkers are likely to buy a lot of them any

Some thoughts on “old” laptops – Joe

People who buy computers are weird. What do you do with a computer? You type on a keyboard, swing a mouse around, and look at a monitor. If either is lousy, your day-by-day, minute-by-minute experience with one is going to