UPDATE: 10/26/01
Looks like AMD is going from pits to slit trenches – the latest XP we bought looks like this: 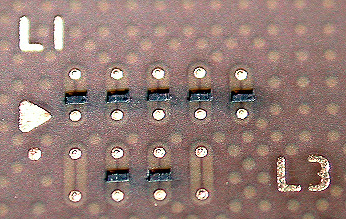 First off, I have to thank AMD for giving me a brand new Athlon XP 1800+ at the Extreme Performance Project Tour. I’d also like to thank Joe for letting me use his photo of the L1 bridges. I know a lot of people have been having problems unlocking the XP, and I wanted to get this article out as fast as possible, which did not allow time to buy a camera capable of that detail.

The Athlon XP, or Palomino, uses a new type of “organic” packaging, much like an Intel PIII. This is probably the reason that they began laser cutting huge pits into the bridges, because if you look at the photo below, the connection is not a simple copper bridge, as before, but appears to be a set of two of them, or perhaps a large copper bridge buried beneath the surface. 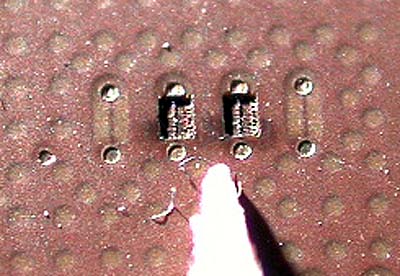 The large bright object is the tip of a toothpick.

This is close to what it actually looks like in real life:

I ask that the first person who kills an Athlon XP dissect it to discover if this new pit cutting is a necessary adjustment due to a design change (widening the bridge) or if it’s a “diabolical” attempt to stop overclockers on AMD’s part. (I highly doubt that it is, because that’s what the Extreme Performance tour is supposedly about, isn’t it?.)

If you take some acetone and a paintbrush to clean the scorch marks out of the pits, you’ll discover gold contacts at the bottom. These are believed to be the reason that people are having trouble unlocking the Palomino. If you fill up the pits with conductive paint, you may be shorting the locks. By filling the pits with nonconductive glue, I was able to attain full control of the multiplier lock.

Start by cleaning the whole L1 area, including the pits, with acetone. Let it dry. Then shield the “dots” with scotch tape. You want the dots fully covered and the pits fully exposed – this doesn’t leave much room for error. You will find yourself pulling the tape off and re-positioning it every step of the way.

Now take your crazy glue and make a mound of it over the bridge.

Let it solidify a little bit so it doesn’t run and then pull the tape off. Don’t let it harden too much or you’ll find that you’ve superglued scotch tape to your CPU.

Use a Q-tip and some acetone to soften up the Krazy Glue, then carefully work down the mound with an Xacto knife until you’ve got it worked down and just the pits are filled in. If there’s still a small hill, don’t worry about it, just so long as you make good contact.

Let that Krazy Glue harden up, then take acetone and clean the “dots” one last time, making sure that you will get good contact and remove any glue that’s on them. Use scotch tape to shield all but the bridge you’re working on. Leave enough space between the pieces of tape so you get a good connection, but don’t leave the space too wide or you might cross the bridges. Crossing the bridges is very, very bad. (RIP 1 stick of Crucial RAM)

Apply some conductive paint with a toothpick. Get a good amount on there and don’t get near L3.

Let it harden up enough so it won’t run, then carefully remove the tape. Don’t let it get too hard or it will remain as one large blob after you pull the tape – a blob with wings. This effect is hard to describe, but if it happens to you, you will know what I mean. If this happens, carefully remove the wings with an Xacto knife. Now let the paint set up and fully harden, or the next step will smear it.

Carefully pull the tape so you don’t rip up the existing paint on the first bridge.

Repeat the process until you do all 5 bridges.

Overall, I think that unlocking a Palomino is easier than a T-Bird. Why? A side by side comparison reveals that the bridges on a Palomino are larger than on a T-Bird, and therefore, easier for me to work with. The extra step of having to use Krazy Glue is a small price to pay for a larger bridge.

At 133 x 12.5, the BIOS identifies the chip at 1600 MHz. SiSoft Sandra reveals that the chip is actually running at 1680 MHz. It should be running at 1662. That gives an overclocker a slight edge, so maybe it would be better if they don’t fix that. I’ve been running it at 1680 MHz most of the night now, under full load, and it seems very stable. Using a stock, el cheapo heatsink, my temps are 113F CPU, 57F case.

How did I get my case temp so low? That’s a topic for a whole different article.

SUMMARY: Penciling in the L1 bridges works sort of OK; the reason is that graphite is a RESISTOR, not a great conductor of electricity. I received this email from Walt: Just a brief comment on your observation that sometimes connecting

Maybe it’s just me, but it seems like Nehalem overclocking is turning into some form of Treasure Hunt.

Synchronized voltages?  We think not.