SUMMARY: The copper waterblock from Cool Computers is a competent addition to the water cooling scene.

Water cooling is taking off! Seems like very week there’s another new face on the scene. Craig Schmidt of Cool Computers sent us his copper waterblock to test out. 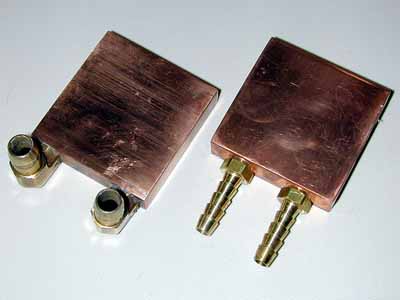 As you can see, it is similar to the BeCooling unit (left) in design; the major differences are the 90 degree elbows (essential for most socket 370 use) and Cool Computer’s use of 1/4″ nipples rather than 3/8″. Cool Computer’s block is nicely finished – no rough spots.

The usual rig: Two stacked peltiers (about 100 watts), Swiftech radiator and 150 gph Beckett in-line pump. Each block was greased and mounted on the peltiers and temperatures recorded. I included the copper BeCooling unit as a reference.

Copper blocks of similar design tend to turn in similar numbers; in this instance, I think the Cool Computer block under performs the BeCooling unit due to its 1/4″ nipples – this results in lower water flow, hence less cooling power. Since almost all water pumps use 3/8″ tubing or larger, 1/4″ nipples become a choke-point in the system.

Overall, the Cool Computer waterblock is a worthy entry to the expanding field of water cooling accessories.

Thanks again to Cool Computers for sending us the waterblock to try out.

SUMMARY: After trying a number of different methods, looks like the tried-and-true AMD/Intel method coupled with back of the CPU readings gives the best picture. I’ve spent the last two weeks immersing myself in heatsink testing methods. Andy Lemont at