SUMMARY: A nicely crafted aluminum water jacket with a dandy socket 7 clip – almost equal to the performance of the AquaStealth’s copper cooler.

I found CoolChip by accident – they are not very “public” right now as they have been developing products and are now actively marketing their units. I sent them an email requesting information on their product and they were kind enough to send an evaluation sample to Overclockers.com for testing. I received the unit pictured below – note that the inlet/outlet diameter is ¼”, a tad on the skimpy side for my taste. I put the unit to the test by replacing my copper water jacket with CoolChip’s aluminum unit. 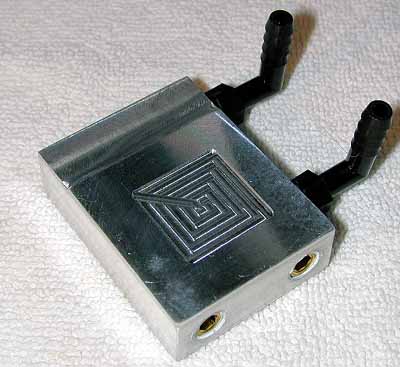 The unit pictured is an earlier model – newer units do not have the indentations seen on this unit.

One of the things I really liked about the CoolChip was the mounting clip; until you have tried to mount one of these, you will not appreciate how much a good design means. By using wing nuts, the CoolChip mount was about the easiest I have used to date. It was also a cinch to balance the water jacket on my 500E Coppermine – this requires different tension on each mounting lug due to the Coppermine’s off-center relative to the socket. 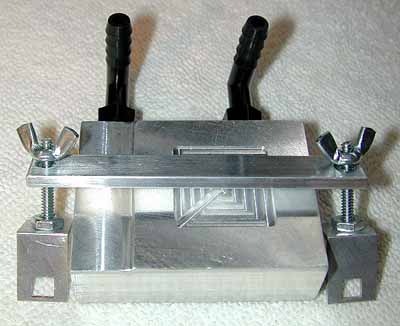 The AquaStealth uses 3/8″ fittings so the CoolChip’s ¼” fittings introduced some flow restriction into the system. I’m sure the pressure increased due to it but after careful clamping, no leaks were found. In testing each unit, I used the 500E @ 667 MHz running Prime95. I let the CPU temp stabilize, then took 500 1 second samples using Motherboard Monitor. I then replaced AquaStealth’s copper unit with CoolChip’s aluminum model under the same conditions with the following results:

Ambient Temp 20 C, Case Temp 25 C with AquaStealth, 24 C with CoolChip; I think the case temp was higher with the AquaStealth because more heat was dumped into the case than with the CoolChip.

For all practical purposes, a 1 C difference between the two is negligible. I was pleasantly surprised as I expected the ¼” piping to yield more of a difference between the two. I spoke to Scott Weeks (Mr. CoolChip) about this and he is introducing a 3/8″ unit shortly – performance should be better. The aluminum unit is of course lighter than copper, making mounting somewhat easier and placing less stress on the system. Because it is easier to machine, aluminum units should be cheaper – the CoolChip unit retails for $18.50.

Right now water cooling is so new that there are really no standards, but I would strongly urge developers to consider 3/8″ the de-facto standard. There are pumps, tubing and radiators around that could easily be adapted to any water cooling solution using this diameter. I have done some searching on pumps and it looks like 3/8″ pumps have flow rates around 50-100 GPH with lifts in excess of 2′ which is more than adequate for CPU cooling.

The CoolChip aluminum water jacket is a very cost-effective CPU cooler to include as part of a water-cooled system. I think the water jackets are sort of like stereo speakers – I don’t mind spending some money here as they are key elements of any system. The CoolChip is well made and performs nicely. With the planned introduction of a 3/8″ model, the CoolChip may be as effective as more expensive copper units.

Note that the CoolChip has two water channels – I spoke to Scott about this and newer units may have three channels.