SUMMARY: If you’re concerned about CPU cracking, this is a good way to protect your CPU’s core – don’t expect any cooling benefits. 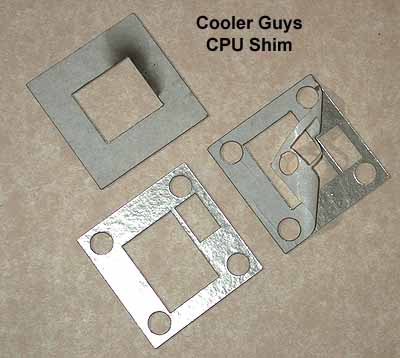 Pictured are two models – Socket A and Intel FCPGA; note the paper that must be peeled back. Also note the burn mark from the laser on the paper.

The Cooler Guys were nice enough to send us a sample of their non-Conductive CPU shim to test out. These shims are made out a mineral called mica – looks like it’s ground up and mixed with some type of epoxy binder to form it into sheets of precise thickness. A laser is used to precisely cut the CPU pattern. For those of you that are interested:

Mica is the name given to a group of silicate minerals that contain atoms of aluminum, oxygen, and silicon bonded into flat layers like the leaves of a book. They have perfect cleavage–that is, they split cleanly into thin flexible sheets.

As I searched around for a mica definition, I also discovered that one form of mica called Muscovite has some interesting properties:

Now, I don’t know if this is what the Cooler Guys had in mind, but I think we’ll stick to its use as a CPU shim. Be warned that this material, while not fragile, can easily be damaged if you try to flex it; you can’t crush it, but you can break it by twisting it.

Steve ‘Supercoolin’ Foster did a fair amount of research on what copper CPU shims do to CPU cooling and concluded that it does not help and in fact, it is a detriment. This is due to the additional loading of secondary cooling on the heatsink and the disruption of the secondary heat path. Copper shims transfer heat efficiently, while “The Cool-Shim does not assist and/or help in additional cooling.”

Well, yes and no. The material used has very low thermal conductivity – basically about as conductive as a rock. However, this does not mean that it does not impact CPU cooling – it just takes longer than a copper or aluminum shim to heat up and transfer heat.

To ascertain its impact, I used the Socket A shim on a T-Bird 1133 running at 1330 (NOTE: Be very careful about removing the paper backing – see the Installation Guide), 1.86v, on an Iwill KK266. I measured CPU back temps with a thermocouple which touches the center back of the CPU. I used the Be Cooling waterblock (fitted with a thermocouple) with and without the shim with the following results:

Even though the material is not thermally efficient, over time it will heat up and impact CPU temps, although minimally – in this instance, about 1 C. If you have an air cooled heatsink that washes air over the CPU core, like the ThermoEngine, it could impact its performance as well.

CPU shims are a great idea if you remove your heatsink often and you have one that is a bear to take on and off. The Cooler Guys shim is very precise in its width and is as non-conductive as a rock, so there’s no possibility of shorting out the CPU. Expect some minimal CPU temp degradation which may or may not be obvious with in-socket thermistors.

*I swear I didn’t make this up.

Thanks again to the Cooler Guys for sending these samples over to test out. These shims are also available from Crazy PC.

SUMMARY: Penciling in the L1 bridges works sort of OK; the reason is that graphite is a RESISTOR, not a great conductor of electricity. I received this email from Walt: Just a brief comment on your observation that sometimes connecting

Seems to me there’s been a lot of hyper-ventilating about AMD’s Phenom II X4 965 Black Edition with some implying it’s an overclocker’s dream. My friends at XBit Labs have taken a close look at what’s possible (HERE) and concluded:

“…[The] new Phenom II X4 965 working at 3.4 GHz frequency is pretty much as fast as Core 2 Quad Q9550 at 2.83 GHz nominal speed and fall behind Core i7-920 with even lower nominal frequency of 2.66 GHz. So, AMD CPUs lose to Intel competitors quite significantly in IPC (instructions per clock). It is this particular fact, but not the insufficiently high clock speeds, that do not allow AMD solutions to find their way into the high-end price segments.

A bad benchmark is no better than an evil one.– Ed