Cooler Master has brought to market their “Fourth Generation Bearing,” a bearing based on POM (polyoxymethylene). So far, they have built three fans with POM bearings. The second fan to use a POM bearing is the Jetflo, the very fan we will be reviewing here. The Jetflo has a number of features that make it an interesting fan indeed. In fact, the POM bearing is just the first of its features. So let us review them all, and put the fan through its paces. 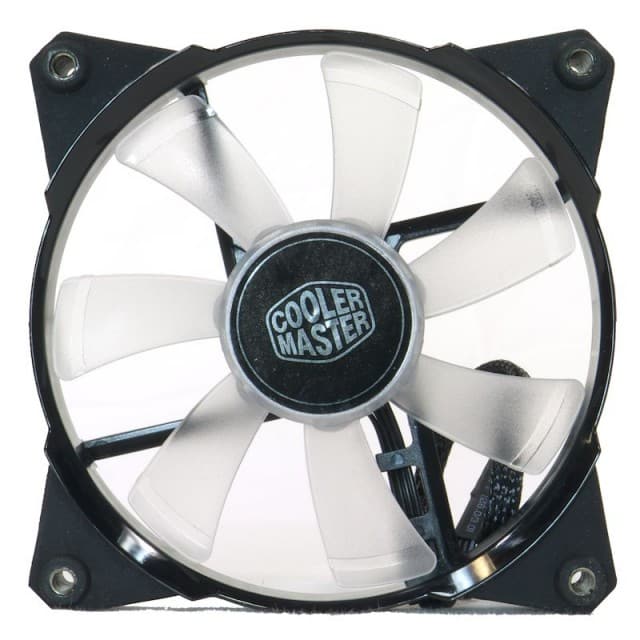 The Cooler Master Jetflo is a PWM fan that ranges from 800 to 2000 RPM, with a stated output of 95 CFM. It comes in four flavors: red, white and blue LEDs and no LEDs. The Jetflo also comes with two adapters that allow fixed speeds at 1200 and 1600 RPM. The POM bearing is rated to 160,000 hours, or more than 18 years. Cooler Master tells us that the fan’s blades focus its airflow instead of spreading it out as normal fans do.

One of the features Cooler Master does not tell you about is the fact that the corners are rubber pieces that are bolted onto the fan’s frame. This feature is designed to cut down on fan vibrations, so they are not transmitted to what it is attached to.

The Cooler Master Jetflo comes in a fully recyclable box, with a cardboard (and recyclable) insert holding the fan and its accessories.

The box has a fold-out cover that explains various features and gives you a peek at the important elements of the Jetflo that’s inside the box.

Pulling it all out, we have a PWM Jetflo and its accessories. Note that the fan was manufactured in June, 2013. Cooler Master has been stamping manufacture dates on their fans at least back to 2008 (I have a Sickle Flow made on 2008-07-01, for example).

The accessories: two black, sleeved, well-labeled “Silent Mode Adapters” and four machine screws. What? Not the short sheet metal screws that come with most fans? These look like they should fit into nuts. But look inside the ears of the fan and you will see machine threads waiting for these screws. Note that the threads are covered with rubber, so when you fasten it to a case, there will be no metal-to-metal contact.

The adapters, by the way, carry no PWM line. So when you connect the fans in a Silent Mode they will no longer be PWM fans. Note each label carries the RPM and sound pressure level specs for that adapter.

A closeup of one of the corners, removed from the frame. You can see the asymmetrical shape. Another aspect is that the screw hole passes clear through the ear, and allows a long 8-24 machine screw to pass right through (this is how I fasten them to the test box). I also tested m4 screws. They passed right through the corners. That makes this fan suitable for radiators.

You can also put this vibration isolator through the hole. It is the best vibration isolator I have used, and it comes stock with several fans. The embedded threads hold it firmly enough that it takes a brisk tug to pull it free.

For an additional treat, the airflow measures were repeated with a screen filter covering the fan to give you an idea of what each fan can do while drawing through a filter.

Note the picture below shows how the fan frame is kept clear of contacting the surface it is attached to. You can also see the 8-24 screws pushing through the corners and holding the fan with wing nuts.

Cooler Master Provided six Jetflo fans for testing. They were assessed at 12 Volts, with the 1600 RPM Silent Mode Adapter, the 1200 RPM Silent Mode Adapter, 7 Volts and 5 Volts. That sounds like essentially thirty fans and settings. But there were five CFM, SPL or RPM measurements per fan / setting, not to mention the Sickle Flow and Sickle Flow X measurements, which took the number of data points up around 150. Whew!

Seven Volts were produced by connecting the 12v and the 5v lines. However, this prevented the fans from reporting their RPM’s, so you will see those speeds marked as ‘-na-’.

You see the results in the tables below. Boiled down, in performance Cooler Master under-promised and over-delivered, always a nice thing to find. Heck, behind a filter the Jetflos produced as much CFM as Cooler Master promised in free air.

We see an interesting Jetflo behavior when the fan is moved from free air to the test box, and the anemometer is placed over the outflow: the Jetflos speed up. They go even faster when they are pulling against the filter, but they slow down a trifle when the anemometer head is stuck into the outflow. 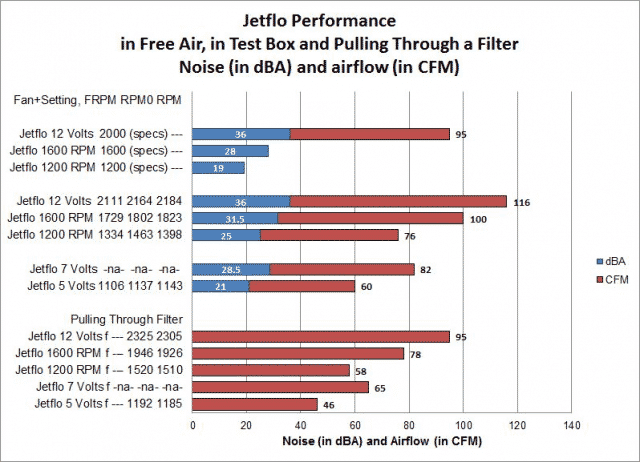 What you do not see in these charts is variability. Without a filter, the Jetflo’s low output was represented by a single fan at 111 CFM. The High output was a single fan at 121 CFM. The other four fans ranged from 115.8 to 116.8 CFM – essentially identical. With a filter the fans ranged from 93.43 CFM (two fans) to 97.77 CFM (two fans ran above 97 CFM). This represented tight clustering of output.

The next Jetflo aspect I investigated is the PWM curve. Now here I tested a single fan – the blue LED fan. I set my motherboard to send a PWM signal to the fan, expressed as PWM Duty, or the percent of time it is signaling. The Jetflo does not run at 0% PWM duty. It stirs to life around 10% and the speed can be read by the motherboard at 13% PWM duty.

The Speed vs PWM curve is fairly flat, once the fan speed can be measured at 590 RPM. One other important note: the fans did not click in PWM mode.

The last item I tested was the rubber corners. I tested them by putting the side of the frame directly on the metal surface of my table saw. Like most fans, it resonated and the buzzed fairly loudly. I then put a corner down. I hardly heard anything. While this was a qualitative test, it did show that the rubber corners did their job. They really did their job.

The rubber corners work well to isolate a Jetflo’s vibrations from whatever it is attached to. Even better: under PWM control these fans did not click.

Although I lack the equipment to measure static pressure, I believe their specs on these, given how hard they pull through the dust filter. As for the blade shape focusing the air output, we will have to take their word for it.

As I noted above, Cooler Master under-promised and over-delivered on these Jetflos. They are good, strong fans.

Here we have Cooler Master’s latest PSU. No longer content with mere Silver or Gold ratings, this unit is rated as an 80+ Platinum unit. The 80+ Platinum badge certifies that the PSU is disgustingly efficient and contributes a bare minimum to global warming. Or at the very least, that it’s at least 89% efficient at full load, 92% at 50% load, and 90% at 20% load. Read More

The Cooler Master Hyper 212 Plus is a price/performance type heatsink that has been recommended on the forums quite a bit when someone is on a limited budget. Let’s see how it stacks up. Read More

Recently I was looking for cases with a list price of $60-80 when I came across the Gigabyte Luxo M30. It had a list price of $66, but as a new case it was discounted to $53. The main picture showed a black left panel, but further pictures showed a large window on the right panel, and an inverted motherboard inside. The interior appeared to have tool-free 5.25” slots and four tool-free hard drive holders. This, I said to myself, I must see. And so, dear readers, we shall explore the Luxo M30 together. Read More