An all-copper heatsink that needs a very noisy fan to make it work. — Joe

SUMMARY: An OK cooler with a Delta 44 howler – not so good with the stock 21 cfm fan. 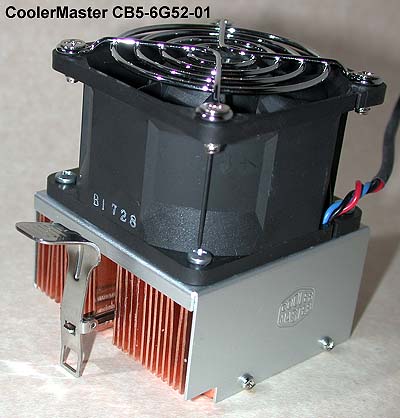 PHAM Computer was nice enough to send us the all copper CoolerMaster CB5-6G52-01 to test out. CoolerMaster ships it with an anemic 60 x 15 mm fan, which I don’t recommend. PHAM sent it to us with the Delta 44¹ cfm, which is quite loud but does get air through the fins. 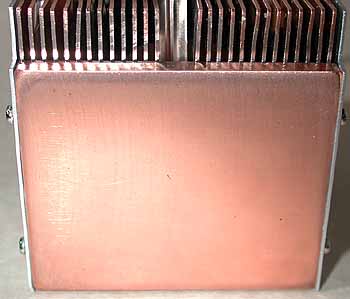 is smooth and has no gross machining marks. Peering down into the top 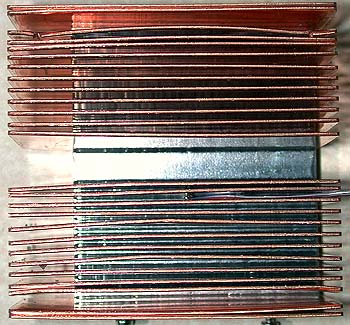 reveals 26 fins that are soldered onto a 5mm thick copper base (note the solder in the center channel). Some of the fins were bent from the screws; as a consequence, the two last fins on each side were pushed together, effectively blocking any airflow through them to the base.

Construction is relatively simple – a copper base plate and fin plates soldered to it. The clip is one of the best I’ve seen – it has a very large platform for your fingers and its length gives excellent leverage, making mounting a snap.

I prepared the CoolerMaster by boring a hole completely through the base so I could epoxy a thermocouple above the CPU. The thermocouple is attached to an Omega HH23 Digital Thermometer. Ambient temps were measured with a thermocouple placed about 1 inch from the fan’s intake. I used Prime 95 to stress the CPU on an Iwill KK266+, Iwill BD133u (MBM temps are on-die) and Abit KT7. Arctic Silver grease was used in all tests. CPU Case Temp is the temp at that point where the CPU contacts the heatsink, CPU Back Temps are measured by a thermocouple on the center back of the CPU.

The CoolerMaster was also tested on the CPU Die Simulator which gives results that are unaffected by motherboard influences.

The stock fan is about 0.1 C/W worse than the Delta 44; I did not test the stock fan on motherboards (not that cruel), so add 0.1 to the motherboard C/Ws and it should be close to what you’ll get with it should you choose to torture your CPU with it.

The Delta 44 did its job – it gets the CoolerMaster into acceptable territory, ranking it at about the mid- to upper-range of Socket A heatsinks. This fan MUST BE used with a 3-4 pin adapter – it draws too much current for almost all motherboard fan headers; you’ll wind up burning it out and probably the CPU also, if you don’t hear the fan stopping.

The CoolerMaster does a credible job with the Delta 44; problem is, it’s so loud that only place you won’t notice it is in a jackhammer testing lab.

Thanks again to PHAM Computer for sending the CoolerMaster our way. Pham is offering a 5% discount – enter this code ziuzn882z when asked during checkout and it will give any order 5% off until 12/1/2001

How to Build a Quiet Computer

This thread on OC Forums is a common complaint among PC users – how to handle PC heat buildup in you room.