A heatsink with a temperature controlled fan – Joe

SUMMARY: A good implementation for a temperature controlled fan. 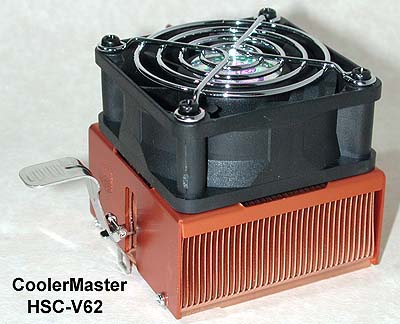 The kind folks at CoolerMaster were nice enough to send a sample of their latest temperature controlled heatsink, the CoolerMaster HSC-V62. This is an all copper skived heatsink.

In response to what I think is a growing consumer backlash against intolerable fan noise, manufacturers are adopting thermally controlled fans using a number of techniques.

CoolerMaster adopted the easiest to implement, a thermistor located in the fan hub: 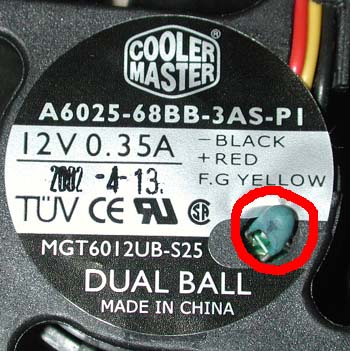 “The thermal sensor actually protrudes from below the fan motor so it is in the region which isn’t directly cooled by the intake air; this way, the thermal sensor can detect the temperature of the top of the heat sink precisely. Our R & D team has worked out the temperature difference between CPU’s core and the heat sink’s top from idle state to full load state in order to construct a special curve line on Speed vs. Temp. graph.”

This allows the fan to vary from 16 cfm @ 3000 rpm at about 40 C to 36 cfm @ 6800 rpm, 47 C. What I noted is the relatively narrow range of the thermistor: 7 C. On others I have seen, the narrowest range was 30 C, far too wide to make much of a difference. How effectively this translates into cooling performance and noise will be seen shortly. 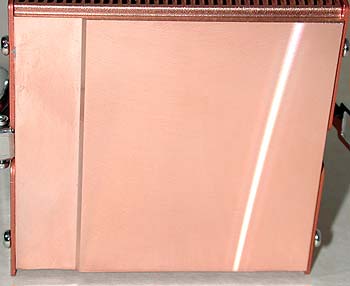 When I ran my nail over it, I could feel and hear ridges – lapping this base makes sense and you might get a few degrees more in performance.

In summary, a copper skived heatsink with a very easy to use clip powered with a temperature controlled fan.

The HSC-V62 was first tested on the CPU Die Simulator which gives results that are unaffected by motherboard influences. I then tested it on an Iwill KK266+, modified to read AMD’s on-die diode, as an example of what users might see on their systems.

Note that the CPU’s diode reading of 59.5 C does not spin the fan at its highest rpms, which one might expect based solely on the relationship between temps and fan rpms. In this instance, rpms in the motherboard test correspond to about 42 C – a difference ao about 17 C. RPMs are determined by heatsink temps, which are far removed from actual CPU temps.

The CoolerMaster HSC-V62 works better than others I have seen with a thermistor in the fan’s hub. However as always, there is a significant tradeoff between noise and performance; also note that higher internal case temps than seen here will result in higher noise levels; case temps in the high 30s may negate thermistor control entirely.

In addition, the thermistor will lag behind CPU temp changes, so do not expect an instantaneous response to CPU temp changes. Last, the link between CPU and heatsink temps is anything but exact and may vary significantly in any given application.

Thanks again to CoolerMaster for sending this our way.