SUMMARY: A better than average cooler, with an interesting visual theme

John over at Jab-Tech was
kind enough to send over one of CoolerMaster’s
new heatsinks to check out.

We’ve all heard the jokes…you get so many fans going in your system that; “My PC sounds like an airplane!”

CoolerMaster, with the Jet 7 (and it’s Jet 4 sibling), have taken that thought and produced a pair of products that actually look like part of
an airplane. 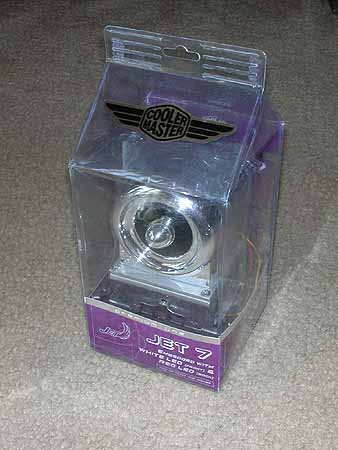 Despite it’s appearance, this product contains no calcium or Vitamin D. 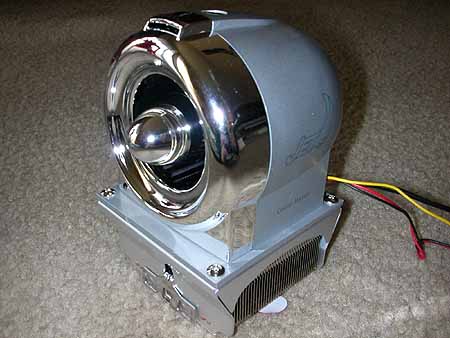 Visually, the Jet 7 is closer to Pratt and Whitney than Hewlett Packard
The “jet engine” theme is continued around the entire blower assembly

There’s also a pair of embedded LEDs included, one front, and one rear. The front LED is a very bright white, and flashes every four or five seconds, the rear LED is
mounted inside that “tail cone”, and as a very bright red (non flashing). These help further enhance the aircraft theme.

As can be seen in the opening picture here, it comes with a pair of brackets, and a bit of wiring. Included in the harness is a fan controller, that
allows variance in speed from 1900 to 3500 RPM. This varies the airflow from the blower to 19.89 to 22.10 CFM as well.

In the little bag visible there, is the knob for the controller, and a spare set of screws for mounting the blower onto the heatsink. It’s installed with chrome screws,
the extra set in the bag are black.

The brackets allow for mounting the fan controller in either an open rear expansion slot, or floppy drive bay. The power lead for the fan is a 4 pin pass-through Molex
type, and there is an additional 3 pin (single wire used) lead for fan RPM monitoring, if desired.

CoolerMaster did their research, and got the visual end of this cooler right. But does is perform as good as it looks?

This product is designed for Socket A and 370 use (AMD and older Intel platforms). CoolerMaster states on the packaging that it’s good for;

The testing I did was with my old AMD XP1800+ (Palomino core) mounted on an Iwill XP333-R motherboard, the only combo I had available at the time of testing.

The Jet 7 uses a hinged retention clip, that hooks onto all six socket lugs. The shape of the heatsink makes it a bit difficult to install, but once it’s on,
it doesn’t move around.

Looking down into the heatsink shows there’s a good number of fins. These aluminum fins are soldered onto a copper base. 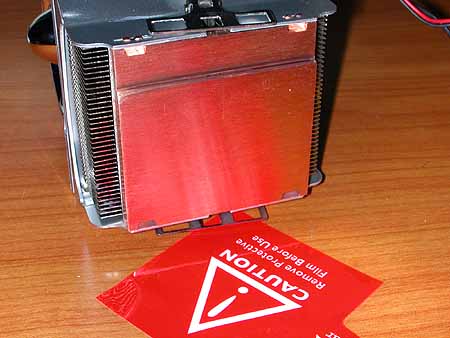 The surface of the copper is a bit rough, with fine scratches left from machining. Hand lapping the base slightly may enhance performance.

Looking into the blower we can see the cage clearly. The benefit of a blower over a typical fan is there’s no ‘dead spot” from the center of the fan.
Usually, that dead spot is centered right over the core of the CPU. With a blower, air can flow freely to all points of the heatsink, especially the center. 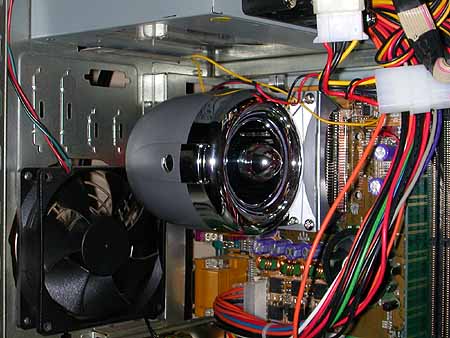 Mounted up on the Iwill.

Logic dictated that facing the front of the blower towards the incoming airflow would yield the best results. Depending on the orientation of the CPU
socket on your motherboard, you may have to rotate the blower on the heatsink to face it the right direction (I did).

If you have a window in the side panel of your case (being a very visually orientated item, a window would make sense), facing it this way also
yields the best view of the Jet 7.

With the ability to control the blower speed, the sound level can also be controlled, as well. At the lowest setting, it’s a fairly quiet unit. When given full voltage,
it’s got a definitely noticeable whine to it. How (in)tolerable this is will depend greatly on the environment around it. The louder the rest of the system and fans used, the
less of an issue the blower on high would be.

This was mounted in a generic mid-tower case, with one 92mm intake fan, one 92mm exhaust fan, and a 92mm “blowhole” fan over the CPU.

Note: Temps shown as reported in Motherboard Monitor 5, using the Iwill onboard thermistor. Temps taken at 100% load while running the Fol[email protected] client.

Not the best I’ve ever seen, but far from the worst.

Testing finds this to be somewhat better than average, in regards to both performance and appearance. I can’t say I’d recommend this particular heatsink
for any serious overclocking, but it should be capable of cooling a mild push of bus and voltage. The better you case airflow is, the less you might have to wind out
the blower. The more you wind up the blower, the less you might want to overclock, however. 3500 RPM certainly isn’t silent.

Visually, this item is somewhat of a novelty, but one that does perform. It not “all show and no go”.

I’d like to thank John over at Jab-Tech for sending
this out to look at.

I did a bit of “extracurricular” testing with this item.

What I did, was to install the blower onto another heatsink, to see how a blower instead of a fan effects temperatures.

This was the first heatsink I’d ever tried that used a blower for cooling, and I’d always wondered just how much that “dead spot” (under the hub of a standard fan) that’s
frequently discussed really matters.

Note: These temps shown are also as reported with Motherboard Monitor 5, running at 100% load using the [email protected] client.

Looking at these numbers here seem to back up the notion that the dead spot indeed can effect temperatures somewhat. Despite putting out significantly less airflow, the
blower holds the temperature right about to where the much higher flowing case fan does.

It is, however, a good deal louder in doing it. Well, perhaps not too much louder, but the noise it makes is more of a high pitched whine, as opposed to the droning hum
the Sunon makes. It’s a less desirable noise, to be sure.

Arctic’s heatsinks have a reputation for providing a quiet, high performance cooler while at a reasonable price. Over the past few weeks, I have used this cooler on my GTX 580 (1.5 GB) to test and compare against the following heatsinks: Thermalright Shaman, Asus DirectCuII, MSI TwinFrozrIII, and the stock rear-exhaust reference cooler.