Cooling Flow was kind enough to send some samples of their thermal grease to Overclockers.com Forum Seniors for testing, results shown below:

Okay, finally had the time to test out that Cooling Flow. It is definitely on AS’s case. First my humble little system:

Now, how it went:

Idle was either surfing and folding or just folding. Load consisted of 6 hours of Prime 95 followed by another 6 hours looped Q3 Demo 001. I cleaned the CPU and applied fresh AS for this testing. There was a complete overnight shutdown between AS testing and CF testing.

I would be a poor judge of pricing because I don’t build and re-build systems often enough. The AS I have costs, I believe, $14 (and I still have a lot). So I would have no problem with this retailing at maybe a buck or so below current AS prices.

I found the heavy consistency of the CF a little problematic at first (used to the thinner spreadability of the AS). The only other thermal paste I’ve used was Radio Shack (that was a little more than problematic). When I switched to AS, there was a solid 4-5C drop in CPU temp and a 2C drop in system temp. So with the results I’ve gotten so far, I would put CF just about on par with AS.

Here’s what I found. The results were consistent with several different applications, using a couple of different heatsinks. Arctic Silver II and Cooling Flow run at the same temps upon application. After 24 hours, Cooling Flow’s temps go up between 1C to 1.5C. The silicone used in Cooling Flow is very thin and has a tendency to separate with time. This is probably the reason for the temperature rise.

With further run time, there were no other temperature changes in the Cooling Flow. Arctic Silver II drops 2C after 48 hours of run time. This leaves a 3.5 C gap between Arctic Silver and Cooling flow. Of the currently available thermal greases, Arctic Silver remains my choice.

OK, got it finished on all the systems I tested it on and here’s just a quick run-down of what I got:

I tested the ambient over the three boards and will include what I got for each of the three as well. All tests were after using SETI for approximately 8 hours (night to 8:30 next morning).

I know this looks weird, but neither of these processors hardly begin to heat up at all when put under load. I tried the test on this 4 times and even tried bending the probes upwards to make better contact to the chip and it still got the same results. This happens to be the only test where the temps differentiated at all between load and idle.

As far as I’m concerned, I’m sticking with the CoolingFlow compound as my choice. Each test was run twice by me and I took the overall best results from all of the machines collectively, meaning this was the test that all the compounds tested best.

As far as price goes, as said before, since it has no precious metals in it so I would like to see it priced less than Arctic Silver. I’d say it will sell great if they get their name out there and market it in the $5 US range.

I wanted to post a little remark to validate what Colin mentioned about the rise of temps after time on the CoolingFlow:

Since I’ve been using it (well over a week and a half), I have noticed a rise of approximately 1.3ºC on my T-Bird. This still puts it almost exactly on par with my ASII but still a little lower in temps. However, I’ve never experienced any drop in temps while using ASII over any period of time. My PIII systems experienced no temp change at all using either over at least a one week period.

You know what Jon, I’m glad that you also have a dually system that doesn’t heat up that much between load and idle. This was the same thing that my test was chastised for and told that it was impossible. I still have ASII on one CPU and CoolingFlow on the other, and it’s still 3C cooler than the ASII and it’s been over a week.

I’m very impressed about this thermal paste, especially if compared with ArticSilverII (the best?); as to price, well, I think that 6-7$ is right for this good product.

Here are the results from Trial 1 using an overvolted (1.78v) and underclocked (Duron 700 @ 700). This test was done on my secondary system, a Shuttle AK31 r3 with the Duron and a Thermalright SK6. Case sides were on and system fans running (I was trying to simulate the average user as much as possible). I tested three greases: Grease included with Alpha heatsinks, Arctic Silver II and Cooling Flow: 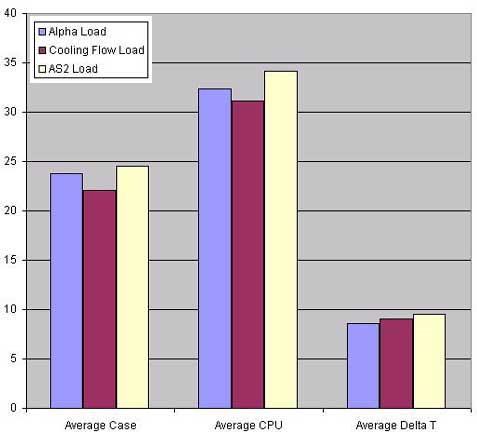 Temps were taken using the motherboard and CPU socket thermistors. Each test was run with a fresh application of grease and the program used to run full load was [email protected]

Cooling Flow is not available in the USA at the present time. If you are interested in this product for resale, contact Young Choi at Cooling Flow.