The Shuttle XPC is a good attempt at cramming what you’d expect from a desktop size PC into a toaster size box with little compromising on features. Fine aluminium finishing, cool lights and no skimping on performance make it as good as any desktop solution out there when it comes to speed – but when it comes to cooling the Shuttle XPC leaves something to be desired.

Indeed, playing a game, folding, or even leaving the machine at idle, especially in warmer weather can cause the machine to reach temperatures of up to 40+ C inside the case, and of 50+ C CPU temps! It’s little wonder when you consider that there’s a single fan ventilating the entire case as well as trying to cool the CPU at the same time, and looking at the rear of the PC we can see that those narrow grill holes do not help. 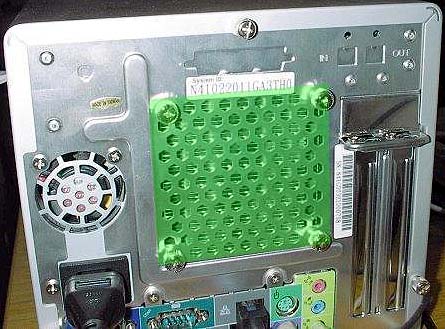 Bringing power tools near my beloved XPC is a no-no so I’ve opted for something which avoids such mess and in the process is cheap, quick and very, very simple. ‘Where’s the fun in that?’ I hear you ask, well…the Shuttle PC is for those who probably want an all-in-one solution with little fuss, little fuss are the key words here, and this quick mod certainly involves that.

Since the Shuttle’s heatpipe cooling fan has to push air through these narrow holes I figured that it would be better to have the fan pull air through the grill instead. 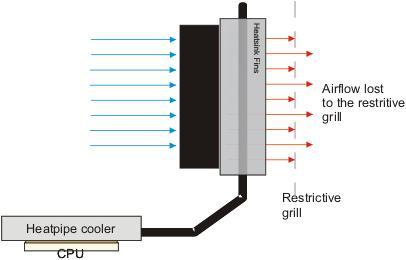 In a similar vein, pulling air is more effective since negative pressure created by the fan ‘sucking’ causes air to take the path of least resistance, ie. through the holes of the grill.

Taking these concepts on board and going one step further: Instead of a single fan pushing air through the grill and the CPU cooler’s heatpipe fins, why not bolt on two fans, in a push-pull configuration? Much like the push-pull configuration used on water-cooling radiators. The simple diagram below illustrates this concept: 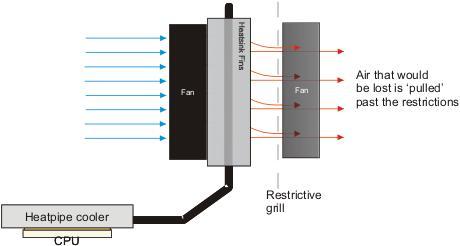 1. After opening the Shuttle up, and removing the hard disk and CD drive bay, remove the four thumbscrews from the back of the machine which hold the fan against the heat pipe fins and replace them with standoffs of the appropriate thread.

The thread in the case of the SN41G2 is 6-32 UNC, the type you see on the coarse threaded motherboard standoffs below: 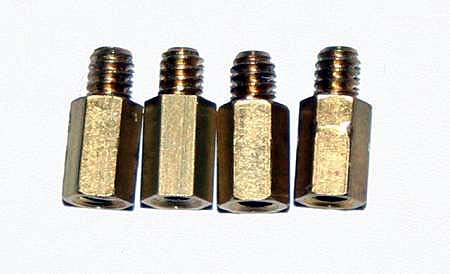 2. Take a strip of card or stiff paper and wrapping it round the shape of the 80mm fan cut it out in a strip about an inch wide. Ensure the strip is long enough to wrap completely round the 80mm fan (I had to tape two strips together). The idea is to create a fan shroud here that will minimise air being pulled through the sides of the fan and direct as much of the negative pressure through the heatpipe’s fins. 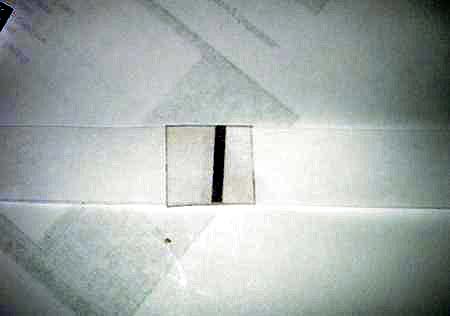 Taping the paper together, ensure it’s a snug fit around the fan and then aligning the 4 case screws you’ll need to secure the fan to the standoffs as below. The screws might need to be metric thread or 6-32 depending upon the internal thread of the your motherboard standoffs, some standoffs bizarrely enough have UNC thread on the outside and metric on the inside! In any case make sure you use the right screws or you’ll end up with some stripped threads. 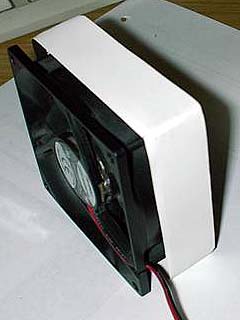 3. Now comes the tricky part (ie. Don’t make the same mistake I did!): Thread the fan cable through the paper shroud you’ve made BEFORE pushing the fan cable inside the machine. Once that’s done, ensure the shroud is a snug fit and if necessary secure it using a rubber band. This will hold it tight around the sides of the fan and so create a flush fit against the back of the Shuttle.

4. The fan cable needs to be passed inside the Shuttle, the following method being one option: 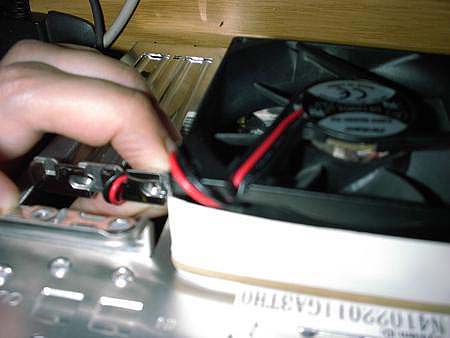 The connector is pushed through a spare PCI slot as shown, and the cable carefully passed so that no sharp edges from the case or blanking plates cut into the fan cable. This is very important and by passing the cable as shown, provided the Shuttle’s card retention mechanism is screwed down gently the fan cable should not suffer any damage. (I now have a card in the slot and find it to be held as securely as the blanking plate shown in the picture). 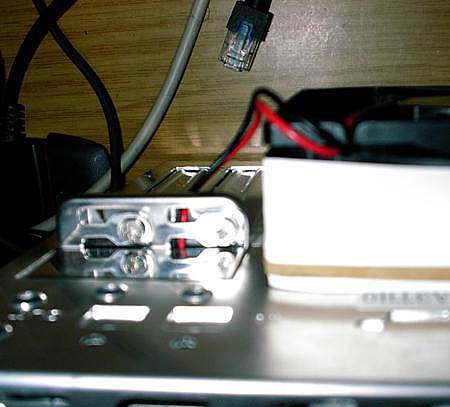 5. Plugging everything back together, the addition of the new fan will not only drop CPU temps but case temps too. 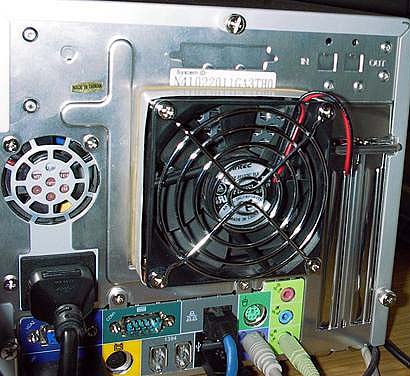 I found in my own experience the following change in temperatures:

58/46
57/45
Case temps are obtained via MBM5 using CPUBurn to load the processor fully.

In total the procedure took half an hour (which also involved figuring things out). It’s resulted in a quieter, happier Shuttle, which is not quite the toaster it once was.

Any comments or suggestions welcome.

Very competitive performance from an all copper forged heatsink. — Joe